In 1977 Doubleday published The Hugo Winners: Volume 3, edited by Isaac Asimov, which includes some Hugo-winning tales from 1970 to 1975.  Recently I acquired a copy of the hardcover book, and yesterday I read three of the stories contained therein, stories I had never read before by authors with whom I have some familiarity.

"Ship Of Shadows" by Fritz Leiber

"Ship of Shadows" first appeared in the July 1969 issue of The Magazine of Fantasy and Science Fiction, a special issue dedicated to celebrating Fritz Leiber.  In his introduction to the novella, Isaac Asimov tells the bizarre story of how his incredible negligence led to "Ship of Shadows" being left out of The Hugo Winners: Volume 2, which was published in 1971.  Asimov treats this as a big joke, even though it seems like Leiber lost money and exposure due to Asimov's and the publisher's inexcusable lapse.  Asimov tells us he doesn't fly and dislikes travel in general, and one of the lame excuses he offers for forgetting about "Ship of Shadows" is that he didn't attend the convention at which the novella won its Hugo because it took place in Europe. 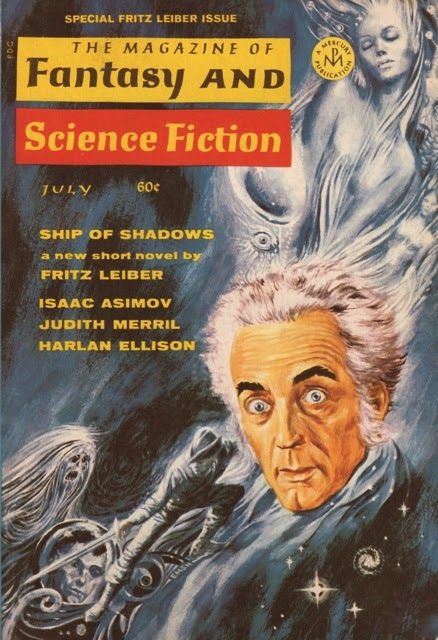 "Ship of Shadows" takes place in a huge space ship in which live hundreds of people.  It is a zero gee environment, and everybody is pulling themselves along lines, sleeping with their ankles tied to shrouds, drinking from plastic bags, etc.  The main character has no knowledge of gravity, and is puzzled by drawings he sees in which women's hair hangs straight down instead of floating in a cloud.

The main character is Spar, the helper in a bar where the less wealthy customers drink booze out of a tube, paying for each second the bar keep, Keeper, opens up the valve.  Spar has terrible eyesight, has no teeth, and has some sort of brain injury or memory loss.  In the grand science fiction tradition we see in Heinlein's Universe, Aldiss's Non-Stop, and Wolfe's Book of the Long Sun, Spar doesn't realize he is on a space ship, and thinks the ship encompasses the entire universe.  Following that same tradition, over the course of the 50-page tale, Spar learns the truth about the ship and about himself and becomes a leader in the effort to improve life for people on the ship.  The plot follows a sort of crime story format, with an organized crime villain, authorities incompetent to stop him, and a violent vengeful climax. 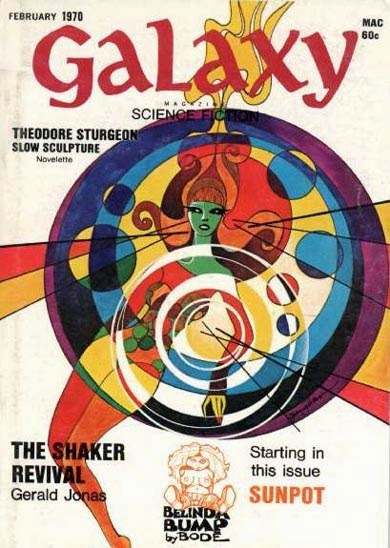 "Slow Sculpture" was published in the February 1970 issue of Galaxy, which, based on its cover, appears to be a special issue dedicated to celebrating the beauty of the female form.

In his introduction to the story Asimov brags that he convinced Sturgeon's wife to quit smoking, and advertises his books of "lecherous limericks."  Then he reproduces a limerick he sang at the convention at which "Slow Sculpture" won its Hugo (this convention was in Boston, so Asimov needn't take a plane to get there.)  This limerick, about a stripper who gave birth to a child out of wedlock, "got the biggest laugh of the evening," we are told, but was not lecherous enough to be included in one of Asimov's volumes of limericks.  Note well, Asimov limerick completists, you will need a copy of The Hugo Winners: Volume 3 in your collections.

"Slow Sculpture" is one of those stories about a super genius who has figured out how to make nonpolluting cars and how to cure cancer and a dozen other super awesome things but is prevented by establishment conspiracies and the stupidity of the common people from saving the world with his inventions.  The story is full of boring lectures.

The "slow sculpture" of the title is a reference to the bonsai.  The super genius has a super sized bonsai tree, and a pretty girl whose cancer he cures uses the bonsai as an allegory for how smart people like the genius should shape society; the bonsai gardener shapes his bonsai subtly, sneakily, slowly, and the cognitive elite should learn to shape humanity the same way.

The people who like this kind of story and voted for "Slow Sculpture" to get a Hugo presumably identified with the genius who we are told should be manipulating our society the way a gardener manipulates his garden.  Those of us who are not geniuses but are clever enough to realize that we would be the garden in this scheme would not have voted for it.

Even if you think scientists should secretly run our society you should realize that this story has little plot (the plot is: genius heals girl physically then girl heals genius psychologically and they fall in love) or feeling or character development.  Hugo mistake.

Asimov's intro for this one is about how he was surprised when he met Lafferty to find that Lafferty was already middle-aged. 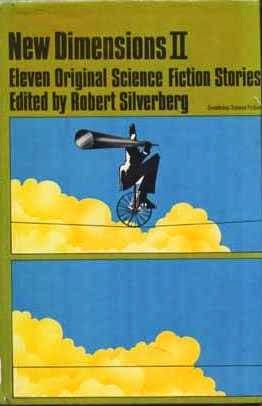 The first page of this 12 page story made me laugh, which was a relief after reading "Slow Sculpture," which, if you didn't notice, irritated me.  As fate would have it, this story, like "Slow Sculpture," is also about a genius inventor who can't deal with women and figures out how to end pollution!  And yet, "Eurema's Dam" is amusing and enjoyable.  The world is full of such mysteries!

As with a lot of his writing, Lafferty doesn't bother making "Eurema's Dam" believable; this is a ridiculous tall tale full of jokes and violence.  I laughed numerous times.  Well deserved Hugo.

Two out of three isn't bad.  I will probably read more of the stories included in  The Hugo Winners: Volume 3 in the near future.
Posted by MPorcius at 9:42 AM