"He is not your son.  You owe his family no allegiance.  No one, as yet, has paid you to find him.  Why are you willing to risk your life?"

If you've read my blog post on the ninth Dumarest book, Mayenne, you'll already know that I own an omnibus put out by DAW in 1981 that includes both Mayenne and the next Dumarest caper, Jondelle.  You'll also know that I thought the blue-eyed blonde with the elaborate necklace on the cover of Jondelle was a pretty girl--in fact it is a six-year-old boy.  Embarrassing!

The tenth Dumarest book, first published by DAW in 1973, finds our hero Earl Dumarest on the planet Ourelle in the labyrinthine city of Sargone.  He gets lost while looking for the museum (Dumarest and I are like two peas in a pod, always eager to go to the museum to see the antiquities) and rescues a guy, Elray, and his adopted six-year-old son, Jondelle, from three armor-clad creeps.  A veteran of the gladiatorial arena who always has his long knife with him, Dumarest makes short work of these jokers, but he does get shot by a laser pistol in the process.

Dumarest is nursed back to health by the boy's mother, Makgar, a doctor, at her farm house in the country.  Dumarest is irresistible to women, and his manliness is doubly attractive to Makgar because her husband, Elray, is one of those pacifists who eschews violence.  When the next batch of armored freakos attacks the farm Elray refuses to shoot at them, so Dumarest and Makgar (in her nightgown!) have to battle them without his help.  Elray, Makgar, and many of the farmhands get killed, Jondelle gets kidnapped, and we readers get an object lesson in the right and responsibility of a man to defend himself and those who depend on him, courtesy of Edwin Charles Tubb: "Elray could have climbed to an upper room, picked off the invaders as they stood before the fires, shot them down as they tried to climb the stairs. Had he acted, the boy would be safe and the woman unharmed."  (For an opposing point of view, see Davis Grubb's "The Baby-Sitter.")

There being no government or police in the countryside, Dumarest turns to the interstellar Church and to a merchant for aid in finding Jondelle and uncovering the mystery of why someone is so interested in kidnapping the boy, and who that someone might be.  Dumarest hires a bunch of down-and-outers and leads them to Melevgan, the region of Ourelle from whence hail the armor-wearing sadists who were hired to seize Jondelle.  The Melevganians are insane, their genetic material damaged by the radiation characteristic of their region.  Genetic degeneration is one of the themes of the novel; Jondelle features several races which suffer genetic defects due to inbreeding.  One of these races serves as a sort of peasantry and proletariat on Ourelle; inbreeding has made them very passive and subservient. 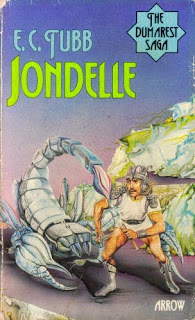 The dangers of passivity is another of Jondelle's themes--Elray's inaction dooms himself and his wife and endangers his adopted son, while another minor character, when faced by a giant scorpion, similarly fails to use a rifle in his possession and dies as a result: "...Altrane would have survived, if he'd had the courage to act."  While looking for clues in Melevgan, Dumarest talks to a slave in a mine, and tells the slave that if he doesn't want to die in the mine, he will have to take action, rising up against the psycho Melevganian mine owners. ("'You're a man!' he snapped.  'Get yourself out.'") It is also noteworthy that the clerics of the Church hypnotize those who come to them for charity, implanting in their brains, Clockwork Orange-style, an aversion to violence which will prevent them from fighting, even in defense.  When Dumarest gathers the men he needs for his expedition to Melevgan, he makes sure to hire only those who have not accepted charity from the Church--men who cannot defend themselves are dead weight, a burden to their fellows.

The survivors of the dangerous expedition to Melevgan, following the info learned in the mine, journey to another part of Ourelle to rescue Jondelle from his kidnapper. Chillingly (or nauseatingly), Jondelle is captive in a sort of brothel!  To our relief, it turns out the brothel owner is just holding Jondelle for ransom.  In the last few pages of the book (you've read our spoiler policy, right?) Dumarest hands Jondelle over to his blonde and blue-eyed grandparents.  Jondelle is the product of "a hundred generations" of inbreeding for specific traits; Makgar was not his genetic mother, but a surrogate mother who fled across the galaxy with the baby because, as grandma puts it, "'she couldn't bear to part with him...the normal reaction of any woman toward the child of her body.'"  The grandparents have been searching for little Jondelle for six years.  In gratitude to Dumarest, they give him a clue to Earth's whereabouts.  Finally, some progress! 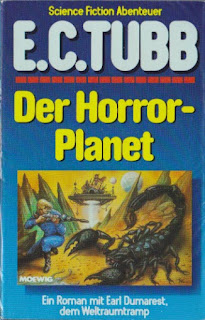 With its insane and sadistic criminals, crime-ridden cities, innocent in jeopardy, and self-defense and vigilante themes, I'm getting a sort of Dirty Harry/Death Wish/Taxi Driver vibe from Jondelle.  Maybe I just have the 1970s on the brain.  The weird races and cultures, bodypaint, air cars and detective stuff reminded me of Jack Vance, the Demon Princes series in particular.  (These are not complaints; I like those movies and I really like Jack Vance.)

Most importantly, this is a great fast-paced adventure novel, full of action, human drama, and weird SF settings, devices and people. E. C. Tubb is a master of this kind of writing, and this volume of the series is a great example of his ability.  Thumbs up for Jondelle and on to Zenya, Dumarest #11!!
Posted by MPorcius at 1:26 PM