"We are the New People--your kind of people.  The people who can think-together."

John Wyndham is one of those writers whose name I've been hearing all my life, but whose books I had, for whatever reason, never read.  How many times in libraries and bookstores across the country have my eyes passed over a copy of Day of the Triffids while I'm at the tail end of the SF section, looking to see what titles are available by Jack Vance, A. E. Van Vogt, and Gene Wolfe?  Anyway, last week I decided to read Re-Birth, which takes up like 125 pages of my copy of Anthony Boucher's 1959 anthology A Treasury of Great Science Fiction.  Re-Birth, it turns out, is an alternate title of Wyndham's 1955 novel The Chrysalids.

This is one of those post-apocalyptic stories, in which our technological society collapsed ages ago and people are living at a more primitive level, and have developed a goofy religion.  (Remember Meg of 3485 A.D.?) It is also one of those stories about oppressed minorities with special powers, like Van Vogt's Slan, Clifford Simak's Time is the Simplest Thing, and Marvel's X-Men, among numerous examples.  There is an endless supply of these stories--they must appeal to many readers and writers, which perhaps indicates something about members of the SF community, and our culture and society at large.

Re-Birth takes place a thousand or more years in the future, in Eastern Canada. Because of a nuclear war, much of the world is dangerously radioactive, with vast blackened deserts and creepy mutant jungles covering most of North America.  The environment is relatively stable in the Labrador and Newfoundland area, where people live what I will call an 18th-century lifestyle in villages and towns; they have organized agriculture, a central government, black powder muskets, and a few steam engines, but no electricity or internal combustion engines.

It seems that the only book to survive the catastrophe of centuries ago was the Bible. The post-apocalyptic version of Christianity has had appended to it a deep concern over mutants; mutations are quite common, and everybody is vigilant in spotting mutant plants and animals, and the law demands that such aberrations be destroyed.  Human beings are not exempt from these strictures, and human mutants are exiled or disposed of tout suite. 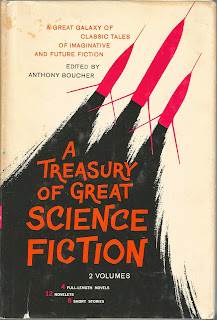 Our narrator, David Strorm, is a young boy as the novel begins, and his father is one of the most devout members of the community, and most dedicated of the mutant hunters.  Some other people in their village consider him a "religious fanatic" or a "bigot."  This is one of those ironies we always find in fiction--our narrator is himself a mutant!  Luckily, his mutations show no outward sign: he can communicate telepathically with other people who share his particular mutation, and he has dreams of a world of cities, electric lights, automobiles and aircraft.  We are initially lead to believe David is dreaming of our own 20th-century world.

The first three-fifths or so of the novel describes David's world and relates numerous incidents of his life as he approaches adulthood, incidents which demonstrate how intolerant everybody is of mutants. David is in telepathic contact with a handful of fellow mutants about his age, and over the years they develop strong bonds of friendship.  When they are discovered in the second half of the novel they flee into "the Fringes," where mutant monsters and people who sporadically raid civilization lead a parlous existence.  While being pursued by the "Norms," they begin to receive telepathic messages from New Zealand, where lies an advanced technological civilization of telepaths who have contempt for people who lack telepathy.  The nuclear war, they say, was the result of 20th-century people's inability to think collectively: "They were only ingenious half-humans, little better than savages; all living shut off from one another, with only clumsy words to link them."  (It was New Zealand that David was "dreaming" of.)

The New Zealanders arrive in their giant helicopter, use a super weapon to massacre the Norms and Fringe people who were chasing David and his mutant buddies, and carry our heroes off to their utopia.  The leader of the New Zealanders is explicitly compared to an angel: "Against the thrown-back white hood, her beautiful head looked as though it were framed by a halo."  Deus ex machina, indeed.

There are a number of unusual elements to the story perhaps worth remarking upon.  All the heroic and competent characters, and all the victims, are women, while all the villains are men.  Our narrator is male, but he is not a hero or leader--mostly he is just along for the ride.  It is women who kill the monsters, it is David's sister (the best telepath in the world) who contacts the New Zealanders, and it is a woman who commands the New Zealand aircraft. Our narrator is a bungler, and when a fight breaks out women do the killing while he flails about.

It is typical for books to romanticize words, literacy, the power of language, and all that.  Re-Birth evinces an hostility to words and text. There's the New Zealand quote above, pointing out how words stink when compared to telepathy.  Also, we are repeatedly told how religious people have anti-mutant phrases (e.g., "WATCH THOU FOR THE MUTANT") printed on the interior walls of their houses.  Reminded of the kitchen of a mutant sympathizer's home, David recalls it as, "The clean, bright room that had seemed so friendly because it had no texts on the walls."

So, what is this novel "about?"  A main theme is that we shouldn't fear and oppress those who are different than us, and the novel is full hints to that effect as well as a few in-your-face speeches.  We should also embrace change, not try to maintain the status quo.  Wyndham suggests that the mutations are nothing to worry about; the mutant crops, animals, and people are all better than what has come before.  Efforts to limit mutations and preserve species are just irrational superstition and selfish evil. (Passages that sound like pleas for tolerance lose some of their ability to persuade when followed by passages in which we are told it is inevitable that the new exterminate the old; what incentive do you have to tolerate the species that is going to eradicate your own?)

Christianity in the novel is an oppressive scam; women have large fabric crosses sewn onto their dresses, and in a scene late in the novel the fleeing mutant women cut these devices off their clothing, symbolizing their liberation.  Maybe these crosses are supposed to remind us of the Crusaders?  I often think these oppressed-minority-with-special-powers stories are allegories about anti-Semitism, and Wyndham's naming the main character David, and inclusion of a debate among the mutants about whether it is wise to marry "Norms," encourages such suspicions.  Maybe we should see New Zealand as akin to Israel?

Other likely inspirations for the novel include witch trials and Red Scares; Arthur Miller's play The Crucible appeared to great acclaim only two years before The Chrysalids was published.  Should we see David and his comrades as the vanguard of the revolution, and utopian New Zealand, with its thriving economy and culture of collectivism, as a stand-in for (an idealized) Soviet Union? The novel does seem to argue that the Christian and individualistic society which built the atomic bomb should be swept away and replaced with some kind of collectivist society, and the cold and detached way the New Zealander talks about how the telepaths will inevitably replace the non-telepaths, and then be replaced in their turn by the next superior evolution of humankind, does recall Marxist beliefs about the inevitability of bourgeois and then proletarian revolution.  The ruthlessness with which the mutants contemplate killing those who stand in their way, including fellow mutants, also recalls revolutionary thinking.

So, is Re-Birth entertaining?  Wyndham's style is alright--Re-Birth has nothing of the sensationalistic or exploitative pulp adventure about it, but reads like a sober and mature mainstream novel--but to me the book feels quite flat.  It moves slowly and quietly, and does not generate any tension or urgency.  Wyndham does little to bring the characters to life--they are just names, so when they get tortured or commit suicide or whatever, it doesn't pull the old heart strings.  Oddly, in the last 30 pages of the novel he suddenly gives us a description of David's love interest, and constructs interesting relationships between various characters, including a love triangle and a brother versus brother blood feud.  Why didn't this interesting stuff appear earlier in the book?  It's like Wyndham realized he had left out the human drama and tried to cram it all in at the last minute.

There is little excitement or passion, no thrills or chills, and except for the New Zealand reveal, nothing particularly surprising happens.  Because we've encountered so many post-apocalyptic stories, denunciations of bigotry, and tales of oppressed super beings before, the material is not intrinsically interesting (to be fair, perhaps back in the '50s this material didn't feel quite so played out), leaving the novel bland, even dull.  Looking at the wikipedia page on Wyndham, I see that SF writer and critic Brian Aldiss criticized Wyndham's work for being "cosy," so I guess I'm not the only one to detect a shortage of tension in Wyndham's writing.

I'm going to have to give this one the dreaded "acceptable" rating.  I can't point to anything actually obnoxiously bad in it, but Re-Birth is a thin gruel that offers little to excite or intrigue the reader.  (This thing has been reprinted approximately a billion times in a dozen languages, so I should probably say there was little to excite or intrigue this reader; I'm afraid I'm really swimming against the tide on this one.)

Disappointing.
Posted by MPorcius at 2:35 PM