The air was magnificently clear so that the project buildings and the surrounding hills all seemed to be drawn with knifelike precision, and in the valley the "Black Planet" so dwarfed the men and machines moving about its base that it gave the appearance of a lonely monolith.  If it should remain there, that's all it would ever be--a monument to man's imagination, a derisive reminder of his failure.

David Duncan wrote the screenplay to George Pal's Time Machine, the Raquel Welch/Donald Pleasance epic Fantastic Voyage, and the Willis O'Brien caper The Black Scorpion.  He also penned thriller/mystery novels like The Bramble Bush and The Madrone Tree.  isfdb lists three SF novels under his name, and today's subject, Dark Dominion, was the first, published in 1954.  Joachim Boaz recently shipped to me, along with like 99 other SF books, a paperback edition put out by Ballantine, who also published the hardcover edition.  If isfdb is to be believed, the book appeared in hard cover, paperback, and in a condensed serialized form over four issues of Collier's all in the same year.  (Over its long life Collier's published lots of genre fiction, like Sax Rohmer's Fu Manchu stories and work by Zane Grey and Ray Bradbury.)  Dark Dominion would go on to be translated into Swedish, Italian, Japanese and Spanish.

Our narrator for the novel's 206 pages is Philip Ambert, a scientist who is in charge of America's top secret space station project, Project Magellan!  The government has taken over 900 square miles of Big Sur, famed haunt of bohemian creative types, and built a scientific and construction complex there, and a comfortable town for ten thousand people.  These ten thousand people--scientists, engineers, soldiers, and their families--are not permitted to leave, and somehow the government has been fooling the outside world into thinking all these people are at an undisclosed location overseas.  Ambert has been in charge of this project for five years, and as our story begins the massive space station, designed to carry a supply of nuclear weapons with which to maintain order throughout the world, is only two months away from completion!  (There's a similar space station which watches over the Earth with nuclear bombs in Robert Heinlein's Space Cadet, but that is a station run by the UN or some sort of world government; the station here in Duncan's book is explicitly an all-American deal which, it is said, will allow the US to dominate the world.) 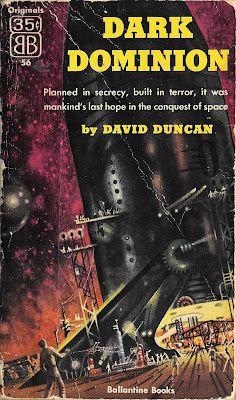 Much of Dark Dominion reads like a soap opera.  Slim-waisted Gail Tanager, who operates a "calculating machine" (her fingers "dance over the keys" as though she is "playing a musical instrument") is in love with the man who will command the station once it is in orbit keeping the peace, hunky naval officer Aaron Matthews.  These two can barely keep their hands off each other (we get scenes in which they almost succumb to their physical desires but step back from the brink) and are heartbroken that they will be parted while Matthews is on his long tour of duty out in space, watching for misbehaving commies to nuke--Gail sees the station, officially called Vittoria but known to everyone as "The Black Planet" (shouldn't it be "Black Moon" if it is going to orbit the Earth?) as a sort of rival.  These doomed lovebirds have other problems, like vain and selfish scientist Warren Osborn, a leader in the field of rockets and guided missiles who has the hots for Gail himself (we get a dramatic scene in which Matthews, in a crowded restaurant, punches Osborn.)  Osborn presents other problems for Ambert, as, his main task at Big Sur completed, he wants to bend the unbendable rules and leave the project early to take up a prestigious job back in New York.

There is also the philosophical/political stuff we might expect in a story about a military space station.  Many people on the project, including Gail and Osborn, are skeptical that the station should be under the control of the military and used as a means of achieving hegemony over the world--shouldn't scientists be in charge of it and use it to study the universe?  (Osborn's arguments in this vein are shown to be those of a two-faced hypocritical opportunist--before the start of the project he was an advocate for just such a project, even writing best-selling books urging America to conquer space so it could crush its enemies; presumably he made these arguments not out of patriotism but so he could sell his expertise.)  There's also talk of free will and the constant striving of life and of Man to do more, to reach further.  (It is probably just me, but the themes and even some individual phrases of Dark Dominion kept reminding me of Horace's third ode, from his first book of odes.) 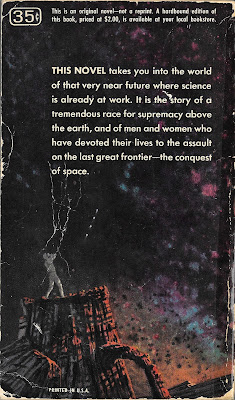 We also get some serious science talk.  One of the boffins, Tom Hernandez, is bombarding uranium with positrons and creates a new superdense element (it weighs three and a half million pounds per cubic foot) that they call Magellanium.  We witness many experiments conducted on the Magellanium and learn all about its many strange properties.  The design of the space station is described, how it will support its crew and what they will see when they get up into space and so forth.  There's a subplot about exploring a system of caves full of bats, fossils, and geologic formations, including a phosphorescent subterranean pool where Ambert's wife Susan swims naked.

In the second half of the novel it becomes apparent that foreign intelligence has located the project and everybody scrambles to finish and launch Vittoria early, before the enemy can bomb it.  Due to a series of unfortunate coincidences (like the fact that Ambert has been sneaking off to explore that cave without telling his security detail--oops!), Ambert is accused of treason and tossed in jail!  Soon after he is cleared, Osborn's treachery--revenge for his wounded pride--and an enemy air attack destroy the station's fuel supplies.  Ambert, Osborn and Hernandez figure out how to launch the station into space using the Magellanium, and it lifts off with Matthews at the helm just as a second enemy attack is blowing up everything at the project site.  But Matthews--that sly devil--has contrived to leave the military personnel behind and take off instead with Gail and a bunch of women and children--including Susan and the Ambert kids!  The Magellanium is an inexhaustible source of propulsion, and Matthews and his harem are not going to orbit the Earth to ensure America's domination of the globe, but explore and colonize the universe!  (Treason and betrayal on a political as well as a personal level are recurring themes in the novel.)  Ambert, left behind, hides in his cave, waiting for the bombing of Big Sur to end and writing the memoir we have been reading.

Dark Dominion, in a way that is difficult for me to define, feels more like a mainstream thriller (I guess what they call a "technothriller") than an actual SF novel.  This isn't a criticism so much as an observation; in fact the book is not bad.  Duncan's writing is smooth and readable, the science stuff is more or less interesting, and while I thought Gail's romance with Matthews was kind of silly, the Osborn stuff was kind of entertaining.  The characters are pretty believable and Duncan deals with the various moral issues in a mature and ambiguous way--neither the military men nor the eggheads are portrayed as unquestionably good or evil.  One of the novel's virtues is that I was unsure what would happen--because every character and even apparently the author (the title of the book comes from a George Meredith poem that is reproduced as an epigraph to the novel, and its choice implies that the station is satanic) was skeptical of the space station and its mission, I had no confidence that it would succeed, but did not know to what extent or in what way it would fail.  I was kept wondering if Osborn's vanity would threaten or even ruin the project, or if he would rally round at the end and do the right thing by the team, and I was curious to see how the author would make use of the cave and the Magellanium in the resolution of the plot.

In my last blog post I lamented that Joachim Boaz and I agreed about Damon Knight's Three Novels, because two guys agreeing is boring.  Luckily, this time around we've got some fireworks!  Back in 2012 Joachim wrote about Dark Dominion and denounced its "poor 1950s sci-fi melodrama," and its "downright preposterous science" and suggested the plot is predictable.  Ouch!  Check out Joachim's critical panning and then maybe you'll want to get a copy of Dark Dominion of your own at ebay in an effort to sort out our differences or take sides in this literary controversy!

At the end of Dark Dominion, Ballantine Books 56, are several pages of fun ads for Ballantine's many publications.  There's a full-page advertisement for the "Science-Fiction Preview Club," and then a long list of not just major SF works like Fahrenheit 451, More Than Human, and Childhood's End, but also Western novels like Law Man ("twenty-four hours in a sheriff's life") and Silver Rock ("A granite-hard story of the West today") and The Canyon ("A story of a young Cheyenne in the days before the white man"), and mainstream literature like New Poems by American Poets (featuring W. H. Auden, Marianne Moore and William Carlos Williams), The Best American Short Stories 1953 (featuring Tennessee Williams and R. V. Cassill) and Charles Jackson's short stories.  Immerse yourself in this fascinating artifact of the paperback publishing world of 60 years ago by clicking the images below.  (I don't know why the list starts at number 22; maybe a page is missing from this book?) 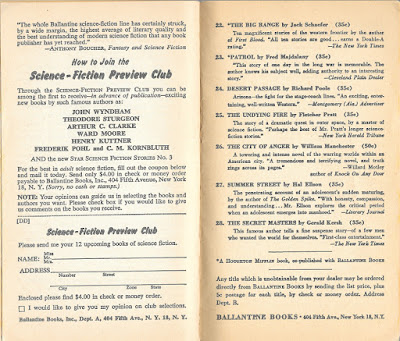 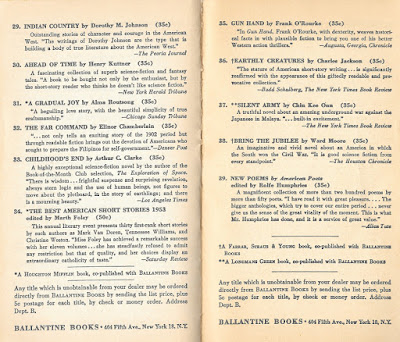 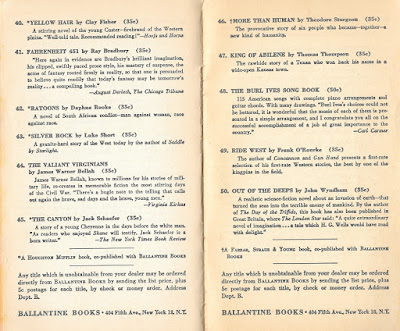 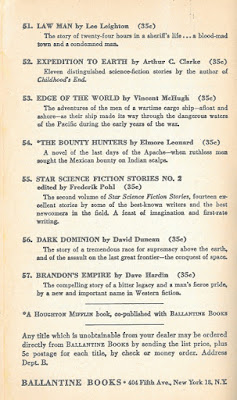