"Wish Upon a Star" by Judith Merril 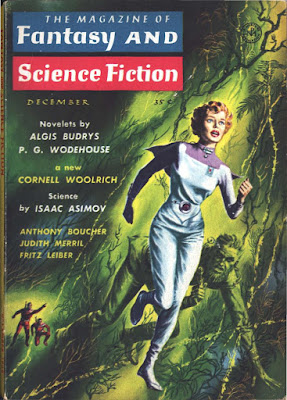 Judith Merril has powerful friends and it is dangerous to cross her.  Case in point: Damon Knight famously stopped writing SF reviews when F&SF refused to print his hostile review of Merril's novel The Tomorrow People, which, like Knight, I thought was pretty damned lame.  When Joachim Boaz announced that the third subject of his series of reviews of generation ship stories would be Merril's "Wish Upon a Star," I wondered what risk I might be running if I participated.  If I thought Merril's story terrible, and fessed up, would the monstrous regimen of internet feminists descend on my insignificant and typo-ridden twitter and google accounts, limiting my ability to tweet photos of the Christmas tree I cut down for my wife or the Warhammer 40,000 models my brother sent me?  I reflected that a coward dies a thousand times and all that and decided to risk reading and writing about "Wish Upon a Star,"--hey, maybe it would be good and my anxiety about crossing the powers that be would turn out to be unfounded.

You can read the magazine version of "Wish Upon a Star" here, in a scan at the internet archive of the 1958 issue of F&SF in which it first appeared.  Joachim Boaz loves to inspire and engage in conversation about vintage SF, so if you read it don't hesitate to drop by his website and take part in the discussion.

Joachim's review of Chad Oliver's 1957 generation ship story "Wind Blows Free," the first subject of his series, is here (my 2018 take is here.)  His review of the second, "Spacebred Generations" by Clifford Simak, is here, and my post on that story is here.

Toshiko (nickname "Sheik") is a thirteen-year-old boy on a space ship sent from Earth twenty or so years ago to find a planet suitable for colonization.  At the beginning of the story Sheik, who we see is very clever, a master at cultivating the plants that make up a large part of the space travellers' diet, wishes he was a girl, because all the officers on the ship and holders of intellectual jobs are female, while males are subordinate--Sheik, for example, works in the garden, but cannot attend the classes or read the books that the girls his age do, and he will never control the garden, he will always have a woman over him, almost certainly a woman with less hands-on knowledge of plants than he has.  It also seems like the men do most of the child rearing.  Over the course of the story (13 pages of text in F&SF) we learn how and why the ship's little society is run the way it is.  When it left Earth the women on the vessel numbered twenty and the men four (a more even sex distribution has prevailed in Sheik's own generation) to enhance production of the next generation, and women were put in charge because it was felt they were more patient and able to "manage the psychological problems of an ingrown group."  The adults on the ship have been hypno-indoctrinated to accept the ship's topsy turvy gender roles and a collectivist life style in which there are no two-parent families but instead communes in which kids are raised collectively.  Sheik is warned not to question the social order, for such talk could lead to trouble.

While perhaps she expects us to believe that this regime is necessary to keep the ship operating smoothly over a period of decades, Merril doesn't paint this tiny matriarchal society in very positive colors.  It is implied that the one woman on the ship who wasn't hypno-indoctrinated couldn't stand the collectivist life style and committed suicide.  People of Sheik's generation, who were born on the ship, have access to books all about life on Earth, and Sheik longs not only for such planetary phenomena as shadows (most lighting within the ship is very diffuse so shadows are a rarity confined to the garden) but for the possibility of a monogamous sexual relationship--one element of "Wish Upon a Star"'s plot is the blossoming of love between Sheik and a girl, Sarah.  When evidence appears that the ship is approaching an Earth-like planet suitable for colonization, some of the men fear the women in charge of the ship will refuse to land because they don't want to surrender their authority.  But these fears appear to be unfounded; in the last paragraphs of the story it looks like the ship is going to land soon, and the gender roles, family organization and individualistic culture we are all familiar with here in the English-speaking world are going to reassert themselves.  Sheik no longer wishes he was a girl, and instead looks forward to a happy life of freedom and monogamy with Sarah on the planet. 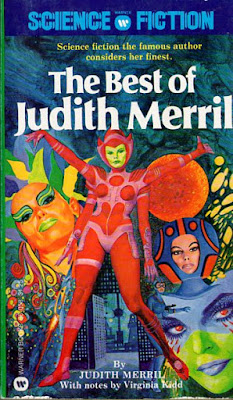 This story is successful--entertaining and interesting enough--but no big deal.  I have to admit I was expecting a more hardcore feminist or leftist story which trumpeted the benign rule of women and/or argued that gender roles are socially constructed and could easily be changed for the better by an enlightened elite.  Instead the story portrays rule by women (on this ship at least) as unnatural and unhealthy and the measures taken to maintain it as intrusive and tyrannical.  Maybe we should consider the possibility that "Wish Upon a Star" is a switcheroo or role reversal story.  You probably know about those EC comics in which a fisherman himself gets hooked and killed or a guy who is mean to spiders finds himself trapped in the web of a kaiju-sized spider, and those Twilight Zone episodes about a U-boat commander being punished in Hell by being placed on an Allied freighter about to be torpedoed or a Nazi being a prisoner in a death camp.  Could "Wish Upon a Star" be a somewhat more subtle version of those types of stories?  Could Merril have written it hoping that male readers, seeing how living in a matriarchal world in which men aren't allowed to be scientists or members of the ruling class crushed a young man's spirit, would consider that their own real world, in which it was difficult for women to become scientists or senators or generals, might be crushing the spirits of young women?

The understated indication that the ship's crew is very multiethnic--along with names like Sarah and Johnson we get names like Toshiko, Abdur, and Harendra--may be noteworthy.

"Wish Upon a Star" has appeared in several Merril collections, including The Best of Judith Merril, the contents of which the author apparently selected herself.
Posted by MPorcius at 3:40 PM