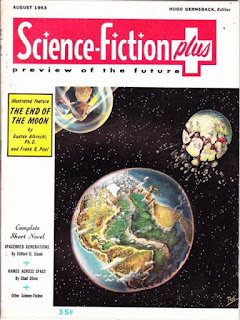 Internet vintage SF hero and supporter of the white elephant known as MPorcius Fiction Log, Joachim Boaz of Science Fiction and Other Suspect Ruminations, is doing a series of reviews of short stories about that beloved science fiction theme, the generation ship.  His first review in the series was of my candidate for the title of anthropologist Chad Oliver's best SF story, 1957's "The Wind Blows Free," which I blogged about in February of 2018.  Joachim announced that the second story he would be dealing with in the series would be Clifford Simak's "Target Generation," originally published under the title "Spacebred Generations" in 1953 in Science Fiction Plus, a magazine edited by Hugo Gernsback, the cismale for whom the Hugo award was named.  A scanned version of that issue of Science Fiction Plus is readily available to one and all at the internet archive, and I read "Spacebred Generations" there last week and am now ready to reveal my assessment to the world.  I encourage you to click on the link to the scan of the magazine yourself before reading my spoiler-rich description and dissection below, read the story and then join the conversation at Joachim's blog--he loves inspiring and participating in discussion of vintage SF!

I have strong disagreements with Simak's political and economic attitudes, and have panned quite a few of his productions, but I still think he is an able writer and I have enjoyed a number of his stories and novels (check out my blog posts on "The Fence", "Dusty Zebra", "To Walk a City's Streets" and A Heritage of Stars) and so I am looking forward to reading "Spacebred Generations."  Gernsback prefaces the story with a long and extravagant blurb ("Here at last is a different science-fiction story") that makes it sound totally awesome.  Let's hope Gernsback's not trying to pull the wool over our glazzies!

Jon Hoff and his wife Mary live on a huge Ship which is run on strict authoritarian lines to ensure that the vessel's supplies don't run out--for example, they are forbidden to have a child until Jon's elderly friend, Joshua, dies.  People aboard the Ship don't even really know what "ship" means, or what stars are, though they know the word "star" and through the observation blisters can see the stars circling their home--the "Folk" believe that the Ship is sitting still and the stars are endlessly rotating around them.  Only a small proportion of the Folk perform any productive work (Joshua, who runs a hydroponics garden, is one of the few who has a job) and so people like Jon and Mary spend all their time just killing time, playing chess or poker or pointlessly gossiping.

Reading is forbidden among the Folk, but Jon was secretly taught how to read by his now-deceased father, who was taught to read by his father before him.  Hidden in an unused level of the giant Ship is the dictionary handed down to him by his father, and with it is a sealed letter, written by a long-forgotten ancestor, only to be opened and read in the event of an emergency.  One day, the Ship suddenly lurches, the stars cease circling the Ship and the surface that was once the floor is now a wall, sending furniture throughout the ship crashing.  Jon decides this seems like an emergency and that the time has come to read that sealed letter!

There are traditions that these generation ship stories tend to follow, traditions seen in Robert Heinlein's 1941 "Universe" and seen again in Brian Aldiss's 1958 Non-Stop AKA Starship and Gene Wolfe's 1990s The Book of the Long Sun: the inhabitants of the ship do not understand the true nature of the ship and the universe, but over the course of the story that true nature is revealed, which results in a paradigm shift marked by a revolutionary war; Simak faithfully hews to these traditions.

The letter guides Jon to a secret room where there is a machine that puts knowledge into your head--by hooking himself up to the machine Jon learns the truth about space and Earth and the stars and the history and mission of the Ship.  The Ship has ceased rotating because it is close to the planet it was sent, a thousand years and dozens of generations ago, to colonize.  Jon has to take control of the ship and guide it into orbit around the planet to be colonized; in the process he will be overturning the static culture and bogus religion that has grown up on the Ship over the centuries, but luckily hidden along with the knowledge machine is a firearm so Jon has the means to work his revolution (remember what Chairman Mao said!)  Tragically, the leader of the religion and defender of the status quo that must be destroyed is Jon's best friend Joe!  Joe becomes one of those eggs that one must break in order to make the omelette!

In the end, when Jon has landed the Ship on an Earth-like planet against the will of the masses of the Folk, Jon realizes that everything that has happened for the last thousand years--including the fake religion and his ancestors' maintenance of a tradition of reading samizdat style and his own revolution--was planned out by the people who built the Ship back on Earth.

This is a good story, and I enjoyed it and recommend it, but Gernsback was exaggerating when he talked abut how "different" it was: it is a standard SF story that does standard stuff.  Simak romanticizes science--the search for knowledge--and the written word, even including multiple footnotes about hydroponics and advanced sleep-learning techniques and computers and research into the oral and written transmission of history that refer to real life experiments and theories.  As in so many SF stories, in "Spacebred Generations" religion is a scam or a mistake that holds back progress.  And like in so many SF stories there is an elite with special knowledge and skills that uses those advantages to push the common people around--for their own good, of course!

If we want to give the benefit of the doubt to Gernsback and Simak (and I do--I like those guys!), we can say that Simak's story is perhaps a little different because Simak goes into the philosophy of when laws are good and should be followed and when they are bad and should be broken, and because Simak doesn't shy away from depicting the costs individuals and communities pay when making a change, even a change for the better.  The religion that Jon explodes really did comfort people, however bogus it may have been, and Jon really does suffer psychologically from having to gun down his unarmed best friend Joe.

A solid traditional SF story--thumbs up!
Posted by MPorcius at 1:46 AM