Let's cast our net back into A Sea of Space and see what we can drag wriggling to the surface!  Today Chad Oliver (!), Ray Russell, William F. Temple and Kris Neville are our guides into "the vast space wilderness."

I'll always think of Chad Oliver as the guy who writes contrived utopian stories about spacefaring anthropologists who decide to abandon Earth to live among Stone Age people who are at one with nature, stories I think are ridiculous and boring.  In his intro to this story, however, editor William F. Nolan tells us "The Wind Blows Free" is about a "life ship" (what I think we usually call a "generation ship") and is one of Oliver's best.  I like generation ship stories, and confident that this isn't about an anthropologist who goes native among primitives, I am willing to tackle "The Wind Blows Free"'s 26 pages.

Sam is born on a generation ship of narrow catwalks, tiny apartments and stifling rules.  The rules may well be necessary to keep the cramped self-sufficient society of the ship (which it is said may well be the last hope of humanity, Earth having been ruined 400 years ago in a cataclysmic war) going, but Sam is an individualist and chafes under them.  Bigger and stronger than the other boys, he bullies them and has no luck making friends.  Sam is fascinated by the sex and violence in the stolen books he reads, but it is drummed into him that guns are bad and when he tries to get into a girl's pants he is confined to the family apartment for an entire year--in the closed environment of the ship population must be rigidly controlled.  Because of his troublemaking, the powers that be do not trust him and as an adult he is stuck at a maintenance job instead of graduating to the "Crew" along with his peer group.  One day comes the final straw, and Sam throws the rules totally out the window and starts exploring the forbidden areas of the ship. 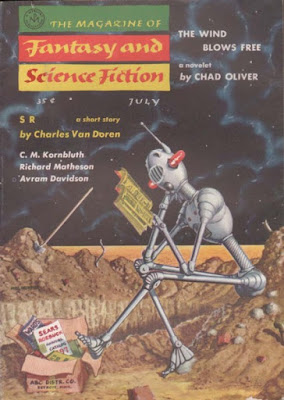 When the Crew catches up to him, Sam kills a man in a fight.  Knowing that he now faces execution or a lobotomy, Sam takes the drastic final step of stepping out of one of the airlocks in the forbidden outer decks of the ship.  He is amazed to find that the ship is a vine and rust-encrusted relic on a green and beautiful world!  The ship must have landed decades or centuries ago, but the Crew, after a lifetime of regimentation, risk-aversion and "mankind ruined the Earth" guilt-trips, has been too scared to disembark, and kept the fact that they have reached their destination a secret!  Sam advances into the jungle and soon meets other men as big and brawny and adventurous as he is; a happy life lies ahead of him.

Oliver yet again gives us a "guy leaves modern society to thrive as a primitive" narrative, but this story is actually a good one.  Oliver brings the ship to life,  doing a good job describing its physical and social architecture and effectively and efficiently setting a tone, and the psychological stuff about Sam is also good.  I'm maybe a little disappointed that the ship wasn't actually in space, but the tradition of generation ship stories is that the passengers are ignorant of their circumstances (generally, they don't realize they are on a space ship) and Oliver manages to adhere to this tradition and at the same time advance his own agenda, so it is forgivable.  Oliver also subtly pays homage to Robert Heinlein's classic generation ship story "Universe," which was fun. 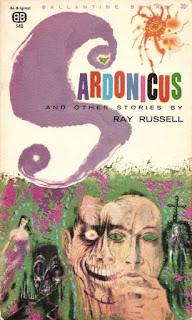 I have read only one Ray Russell story before and I thought it a waste of time.  If you are wondering who Russell is, Nolan tells us in the intro here that Russell was an executive editor at Playboy and "brought quality science fiction to its pages."  Maybe this story will be worth my time?

Not really.  "I Am Returning" is a gimmick story, the tale of the fall of Satan explained or reimagined as the story of a winged alien with antenna, the loser of a civil war, crashlanding his ship on Earth in the Mesozoic era.  Too proud to admit defeat, Satan burrows to the Earth's core, and from there uses his telepathic powers to influence the evolution of the human race, pushing us to develop high technology and to construct a space navy with which to continue the civil war.  As the five-page story ends it is the close of the 21st Century and Lucifer is leading his Earth-built fleet out into space to fight Round Two of the War in Heaven.

Because it is brief I will give "I Am Returning" a grudging acceptable rating.  It first appeared, I believe, in Russell's collection Sardonicus and Other Stories.

Last year the MPorcius staff examined a pile of Ace Doubles, including 76380, which presented Temple's Battle on Venus and The Three Suns of Amara.  I guess I was sort of lukewarm about them.  Nolan in his intro to this story here briefly describes Nolan's adventurous life (serving in the Eighth Army during the long Mediterranean campaigns of World War II and then in peacetime rooming with Arthur C. Clarke) and commends "The Undiscovered Country" itself as a "tense adventure." 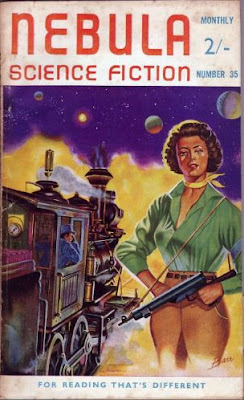 "The Undiscovered Country" turns out to be the kind of story I was expecting (hoping) from a collection billed as being about "voyages in space."  Astronauts have discovered that living on the surface of Pluto are people whose metabolisms move at a rate one fortieth of our Earth metabolisms.  Unfortunately, everybody on the first two Earth expeditions to Pluto died because Pluto's acidic atmosphere can burn right through a conventional spaceship and cause catastrophic failure.  The third expedition, of which our narrator is a member, crews a ship specially built to withstand the Plutonian atmosphere, but can only do so for a short time!

This third Pluto research team snatches a beautiful young Plutonian woman (did I mention that these Plutonians are nudists?) and puts her on the Earth ship in a special tank full of Pluto air.  The hope is to study her, perhaps even keep her alive and learn to communicate with her.  But the Plutonian girl does not appreciate being kidnapped and put in a tiny cell, and uses her previously unsuspected telekinetic powers to sabotage the ship!  Who will live?  Who will die?  Will the ship get to Earth, or will the alien beauty seize control of the vessel and take it back to Pluto?

A good adventure story; I actually think it is too short, that there are lots of ideas in the story that are not explored as far as they might be.  How often do I say that?  Temple tosses in Shakespeare references and historical analogies along with all the science blah blah blah, so reading it really makes you feel like a smart guy!  "The Undiscovered Country" was first published in Nebula.

A few years ago I read several Kris Neville stories, as chronicled here and here.  Taken together, I found the stories pretty thought-provoking, and a few of them were actually touching or exciting.  So I have hopes for "Worship Night!"

Like Robert Bloch's "The Old College Try" this is a story about colonialism that reminds me of Somerset Maugham, but whereas Bloch's story was a humorous horror story Neville's story is sad and realistic. 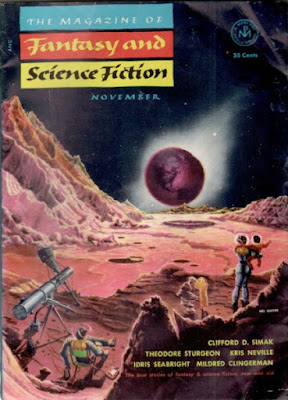 George, a college professor, and his wife Wilma are Earthlings who have lived on planet Cerl for twenty years.  Today is moving day; they are relocating from a big city (presumably built to human specifications, as the natives seem like primitives) to a house in the country, apparently to retire.  George is planning to write a book on Cerl and its people, and his wife urges him to do so, because interaction with humanity is radically changing Cerl society and later historians will lack George's familiarity with the traditional ways of the people of Cerl.

Neville makes clear that George and Wilma identify more with the natives than with their own kind--for example, the native employees at their apartment building assemble on the roof to bid them farewell as they board the aircar to their new place, but none of George's human colleagues of twenty years come to see them off--George suggests that their fellow Earthers feel he and Wilma have "gone native."  But, as humans, a vast gulf separates them from the Cerl people.  At their new place they are treated in a standoffish and surly manner by the locals, and they recall how it took them long years back in the city to make friends with the natives there.  (The reader has to wonder to what extent the natives who worked at their apartment building were really their "friends" and not merely obsequious service workers catering to their customers, hoping for tips and the like.)  No longer young, George and Wilma may die before they can establish any relationships in their new environs, and George wonders if he shouldn't have taken a job offer he had of a position back on Earth instead of buying a house on this alien world.  Having turned their backs on their own people, and unable to fully gain acceptance among the people of this planet, George and Wilma may have doomed themselves to an old age of loneliness and alienation.

Not bad; the style is good, Neville efficiently painting images and conveying the emotions of these lost souls.  "Worship Night" was first published in F&SF.

With one exception, a good crop of stories.  Our voyage into space has been fruitful!

More anthologized SF in our next episode!
Posted by MPorcius at 1:23 PM