The seventh edition of Judith Merril's The Year's Best S-F, printed in 1963 by Dell, includes lots of quite short pieces by people whose writing I'm not very familiar with. This week I read five such stories; all of which first appeared in 1961. 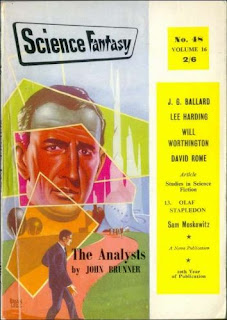 This one first appeared in the British magazine Science Fantasy.  British-born Australian Rome has over 20 short story credits at isfdb, but only one listed novel, a 1970 release called Squat (other sources suggest Squat first appeared in 1964.)  Squat is billed as a novel about "sexual adventure on other planets," and the cover art is pretty striking.

"Parky"'s plot is a little slight, but Rome has a good style and includes charming little details that really elevate the material, so that I rather enjoyed the story.

Our first person narrator for this seven-page story is the owner of a traveling circus. One of his employees is a mind reader, Ephraim Parkinson, AKA "Parky." Parky isn't much of a showman, and his performances are unprofitable. So, the narrator is not exactly put out when an odd character appears and wants to hire Parky away. Once the deal is done it is revealed that Parky's new employer is from another world, one ravaged by war. Parky is the only true mind reader in the universe, and his abilities are needed to facilitate critical peace talks on this other planet or galaxy or whatever it is.

An example of one of the little touches that I liked: the alien is disguised as a human, and his umbrella is merely a prop-- when it rains he doesn't think to open it.

Good! I will have to figure out if I have easy access to any more stories by Rome online or at local libraries. 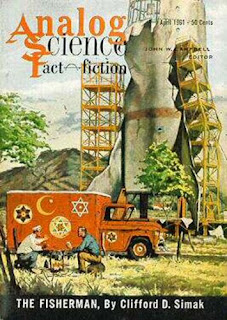 Jesse Franklin Bone has quite a few credits at isfdb, and nine stories (including this one) available for free at gutenberg.org.  I believe this story, which appeared in Analog, is the first Bone story I have ever read.

"A Prize for Edie" is more of an idea than a story; there isn't much character or plot. As such, at four and a half pages it is too long.

The year: 2001.  A mysterious American researcher has discovered a cure for cancer! The Nobel Committee wants to award its prize to this benefactor of mankind, but C. Edie turns out to be not a man, not a woman, but a computer!  The entire story is a conversation among the Committee members in which they express embarrassment over having to invite a machine to a banquet and hang a medal on a machine and eat dinner with a machine, etc.

Have you seen that 1980 Popeye movie?  I saw it this weekend....well blow me down, is it terrible!*   And yet half the people who worked on the movie (e. g., Robert Altman, Robin Williams, Henry Nilsson) are people we are supposed to revere as geniuses.  Well, I guess genius takes a day off sometimes.

One of the geniuses of whom I speak is Jules Feiffer, who wrote the screenplay for Popeye.  Feiffer has a comic strip in The Year's Best S-F 7 in which he expresses his belief that "urban renewal" and post-war architecture suck.  His gimmick: when alien archaeologists dig up the ruins of New York they will suspect that the older, more ornate, buildings, like brownstones, were built by a later more sophisticated culture than the in fact newer, sterile, glass box skyscrapers.  I sympathize with his point of view, but this joke is just OK, and I don't really like Feiffer's drawing style; it feels weak, wispy, vague, though this strip is more solid and weighty than most of Feiffer's characteristically attenuated work.  I guess I'm giving a narrowly passing grade to the genius for this production.

(I actually quite like Carnal Knowledge, so don't think I'm some kind of Feiffer-hater.)

I'm going to pull a tarbandu here and reproduce the comic strip below.  If you are Jules Feiffer's lawyer, please take into account my effort to promote Carnal Knowledge to my vast readership before filing that lawsuit. 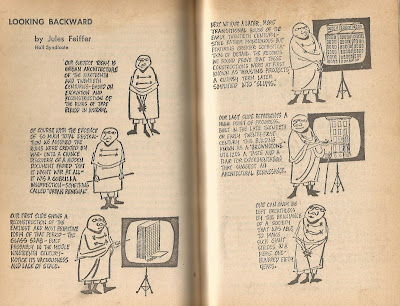 "The Tunnel Ahead" by Alice Glaser 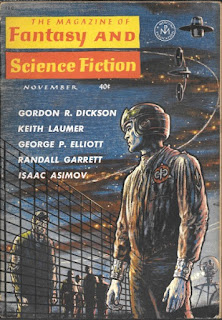 This is Alice Glaser's sole credit at isfdb.  "The Tunnel Ahead" appeared in The Magazine of Fantasy and Science Fiction.

This is an overpopulation story, set in the 22nd century.  Tom and his family are riding their tiny self-driving car home to Manhattan after spending time at the beach.  Glaser fills the story's nine pages to the brim with details of life in the overcrowded world; Tom looks out the window and Glaser describes the landscape of Manhattan, New Jersey and Long Island, the buildings and elevated highways and so on, and Tom reflects on his life and she tells of how people have reacted to slow, overcrowded lives without privacy and without productive work.  The story's punchline is that to get back to Manhattan you have to drive through a tunnel, and at random times the tunnel seals up, capturing the hundreds of cars within and exterminating their occupants.  This is a population-control policy that has been put to a vote repeatedly and endorsed by the electorate.  Presumably Glaser is attacking the American people, whom she believes to be more willing to murder people at random than to voluntarily or by legislation limit births.  (Tom has four kids and a fifth on the way.)  Perhaps most interesting about the story is the fact that Tom enjoys the life and death gambling aspect of driving through the tunnel; in a world in which computers and machines do all the work, it is the only excitement available to people.

This is a better than average overpopulation story, and a good science fiction story, combining as it does technological, social and psychological speculations with interesting images and even interesting characters.  It is too bad Glaser does not seem to have done any more work in the field. 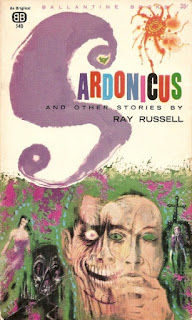 "The Long Night" by Ray Russell

This story appeared in Russell's collection Sardonicus and Other Stories.  Russell had a career working in men's magazines, and this story also appeared in Rogue that year.

This is a gimmicky joke story, just two pages.  Due to a series of unlikely coincidences involving sorcery, astronomy and vampirism, a deposed dictator suffers an eternal torment in a desolate place of exile; he cannot eat, cannot sleep, and cannot die.

I'm finding it hard to believe this is one of the best SF stories of 1961.

It's a nice reminder of the cruel world we live in that the stories I liked out of this batch of five, the David Rome story and the Alice Glaser story, are by people who did no more work in the SF field or whose work is not easy to get a hold of.

************
*1) Boring.
2) Long.   Every scene is very long and very slow, including action scenes, which need some velocity to be effective, and slapstick joke scenes, which require surprise to be effective.  Each joke takes too long to tell, and is repeated again and again--how many times do I have to see an anemic gag like a guy failing to pick up his hat, or demanding some weird tax?
3) Confusing. I could barely understand half the dialogue, and the highly choreographed scenes, like the meal at the Oyls' place early in the picture, are very busy and cluttered, and have no weight, no meaning or feeling, so there is no payoff for bothering to figure them out.  Character motivations are also a little confusing; why does Olive Oil change her opinions about Popeye and Bluto/Brutus? Similarly, I lost track of how we and the characters were supposed to feel about Pappy/The Commodore.  Did I doze through the explanations for these things?
4) Bad songs.  Too many of the songs are just a word or phrase repeated again and again.  Ugh.
5) Photography.  I'll grant that the water and sky are beautiful, but often the camera work puts the viewer far away from what was going on, putting distance between the viewer and the story and characters, making things more confusing and less emotionally resonant.
Posted by MPorcius at 11:07 PM