No Brother, No Friend by Richard C. Meredith

On the one hand there was a sense of sincerity, of total and complete honesty exuded by the old female Krith, yet, on the other hand, over the years the Kriths had told so many lies, so many lies that had seemed to be totally convincing, I found it hard to credit truth to anything a Krith said without hard objective proof to back it up.

My mother, for reasons I cannot fathom, has become a partisan of Thriftbooks.com, and for my birthday got me a gift card usable at their website.  I'd prefer a gift card usable at amazon, because the people at Thriftbooks.com ruin the appearance of the books they sell by affixing to them large stickers which are impossible to remove.  It is similarly impossible to tell this to my mother, who doesn't let one get a word in, and already thinks I am a snob ("Why do you wear those fancy clothes?  Why don't you wear something comfortable like the rest of us, like jeans and a T-shirt?") an ingrate ("We are very disappointed that you aren't using that education we paid so much money for") and a failure ("We thought you were going to be a professor, and now you have that dead end job....")  My whining to her about stickers on the books she bought me is not going to have a positive effect on our relationship.  So I guess that makes me a steady Thriftbooks.com customer. 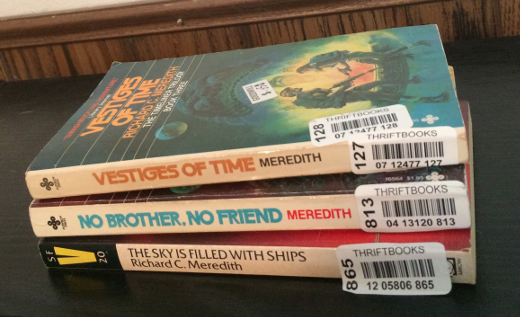 Anyway, I liked the first volume of Richard C. Meredith's Timeliner Trilogy, At The Narrow Passage, enough that I used my birthday present to buy the rest, as well as Meredith's The Sky is Filled with Ships.  To my disappointment We All Died at Breakaway Station is quite expensive online; I'll have to hope to stumble on a cheap one in real life.

This week I read No Brother, No Friend, the 1979 paperback edition put out by Playboy.  Originally, the novel appeared in 1976 with a very odd, modern art collage cover that reminded me a little of Max Ernst.  The text of the Playboy edition, with a more conventional sex, violence, and aliens cover, is apparently revised in some way.

I was pretty disappointed as I started No Brother, No Friend.  It felt long and slow, with nothing much happening.  Our narrator from At The Narrow Passage, Eric Mathers, is hiding out with a girlfriend on one of the multitudes of alternate Earths, and after just a few pages they get captured by the Krith.  The Krith are one of two advanced nonhuman races competing for dominance of the multiverse, in part by manipulating the more numerous but less sophisticated humans; in the past Mathers has worked in their employ as a mercenary, but in the course of the earlier novel he became disillusioned with them.

The portion of the narrative covering Mathers's captivity includes lots of flashbacks to scenes from At The Narrow Passage and surreal dream sequences when Mathers gets drugged.  The style is irritating, tedious and overwritten, with unnecessarily wordy sentences (a Krith says "I am rather certain that your murder of Kar-hinter will not go unavenged" instead of just "I am certain you will be punished for murdering Kar-hinter" or "I am certain your murder of kar-hnter will be avenged") and odd and distracting metaphors--check out this sentence on page 17:


This one was tall, a full seven feet, built like a wrestler, but with no fat, and he carried an energy pistol exactly like Pall's--big, black, and ugly as patricide and incest.

Maybe this apparent non-sequitur about patricide and incest is supposed to foreshadow the relationship between humanity and the Krith which is revealed in the final third of the novel? 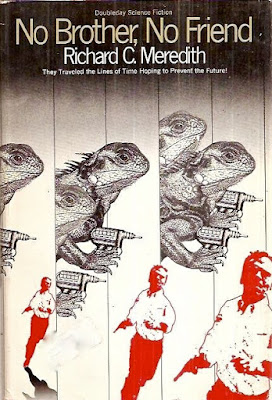 Fortunately around page 60 Mathers escapes to a timeline with a kind of Norse Viking flavor, and the style and pacing of the novel make a turn for the better. In this timeline North America is split up into smallish competing English ("Anglian"), German ("Imperial"), French ("Frankish") and Native ("Skralang") political units, and Mathers falls in with the English, who are allied with the American Indians.

As you may remember, At The Narrow Passage began in a dimension where the Krith were aiding the British, and featured Mathers participating in a British commando raid in France, the object of which was to capture a German aristocrat.  In the Norse world which is the setting for the middle part of No Brother, No Friend the Krith are working against the English, and Mathers participates in an English-American commando raid in Georgia, the object of which is to capture a Krith secret headquarters.  The German aristocrat is back, this time as a leader of the raid and a comrade of Mathers's.  It is nice to see this guy doesn't hold a grudge, even though Mathers not only tried to kidnap him but has been sleeping with his wife.

This middle part of the novel that focuses on the attack is an improvement over the slow and clumsy beginning.  The military and espionage aspects are entertaining, and a new character is introduced who is somewhat interesting, an embittered female spy who acts as a love (or maybe we should say "lust") interest for our narrator.  (She is a lot more interesting than the girlfriend I mentioned.)  The pace is faster, things actually happen, and the writing seems tighter.  I wonder if the first third of the novel got more revision, or less revision, than the rest of the book; this could perhaps account for the differences in style.

The English force falls into a Krith trap, and most of the characters don't live to see the final third of the book.  Mathers survives, of course, and after some shenanigans revolving around him capturing Kriths and Kriths capturing him, back and forth across a variety of dimensions, he ends up in the Krith home dimension.  Here he finds himself before the Krith ruling tribunal, the handful of rare female Krith, who are repulsively obese and wrinkled from age, but also gifted with tremendous psychic powers.  These female rulers explain the crisis facing the universe, hint at the multiverse-shaking importance of Mathers himself, and explain the bizarre origin of the Krith race--they are the descendants of genetically-engineered human beings, created and then abandoned by callous high-tech humans from a particularly advanced timeline.  (Of course, any or all of this could be a lie!)

When I talked about At The Narrow Passage I compared elements of the novel to the work of Isaac Asimov and Robert Heinlein.  Today I am going to compare elements of No Brother, No Friend to the work of A. E. van Vogt and Alfred Bester.  A few times in these first two Timeliner books a shadowy figure appears out of nowhere to aid Mathers.  In the last few chapters of No Brother, No Friend we learn that this figure is Mathers himself, the Mathers of the future, who has attained great psionic power and travelled back in time to help his younger self.  Van Vogt, of course, is known for having characters who develop super mental powers.  (At one point Meredith actually uses the word "supermind," which I thought might be significant.  While the first edition of No Brother, No Friend was published a year before DAW published Van Vogt's Supermind, Supermind is a fix-up of stories that appeared long before, and, of course, the revised edition of No Brother, No Friend appeared two years after Supermind.)  One of the memorable elements of Bester's well-known 1956 novel The Stars My Destination (AKA Tiger! Tiger!) is how the protagonist's future self travels back through time to periodically appear before him in a dramatic and mysterious fashion.

At the end of No Brother, No Friend, Mathers reunites with the (boring) girlfriend from the start of the book, and with the help of shadowy future Mathers they escape the Krith to a presumably safe timeline.  Of course, they hoped they were safe in the timeline that started the book.

The first quarter or so of No Brother, No Friend is weak, but the remainder has some of the strengths that led me to enjoy At The Narrow Passage--the military stuff, and the uncertainty surrounding  the true nature of the universe and which factions deserved the reader's sympathy.  So, a mild recommendation.  I'm definitely curious about what goes on in the third Timeliner volume, Vestiges of Time.

The back pages of No Brother, No Friend advertise other paperbacks produced by Playboy, including a horror novel, The Siblng by Adam Hall, that Robert Bloch says will haunt your dreams, and a series of adventures by Graham Diamond which are apparently about a sexy princess who fights "the creatures of the forest" in a grim far future. 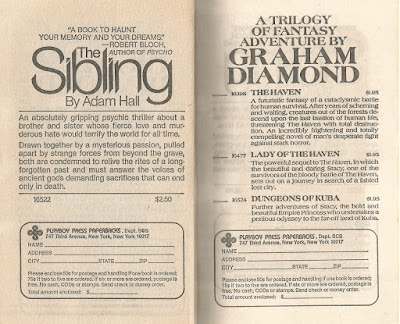