Who Goes Here? by Bob Shaw

Repeated assurances that he had been some kind of Anti-Christ in his former existence were beginning to have a bludgeoning effect on him. He wished Toogood would drop the subject and let him forget that he had nothing to remember.

Just this week I was looking at the website put up by the people at SF Gateway, where you can (and should!) purchase electronic texts of classic SF and fantasy.  There was a little doohickey which you could push to see their "All Time Top Ten," a list which, I found when I pushed the thingamajig, included such important and MPorcius-approved works as Gene Wolfe's Shadow of the Torturer,  Joe Haldeman's Forever War, and Harry Harrison's Deathworld.  Number Ten on the list was Bob Shaw's Who Goes Here?, which last month I purchased while travelling cross country in our recently repaired Toyota Corolla.  I decided I better read it fast before I was in the embarrassing position of being the last kid on my block to enjoy this popular favorite. 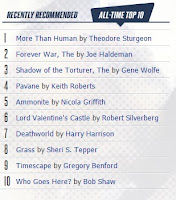 My copy of Who Goes Here? was printed by Ace in 1978; the novel has a copyright of 1977.  I love the space adventure cover: a guy in a forest carrying a long and complicated-looking rifle meets huge chitinous worms!  Friend or foe?  I gotta know!

I was pretty surprised and disappointed when I realized that Who Goes Here? was one big joke.  Or maybe I should say a collection of many jokes--there seem to be multiple gags and puns on each of the novel's 214 pages.  (The print is large, so in fact the book is not particularly long.)

It is the future, the year 2386!  A treatment is available for people suffering psychological problems that erases a portion of their memories, relieving them of feelings of guilt.  In return for this treatment, recipients are enlisted in the Space Legion for an unspecified, open-ended period of service which, in practice, lasts until they are killed.  As the novel opens we meet such a recruit, a man with the unusual name of "Warren Peace."  For some reason, his entire memory has been erased--he can't recall a single component of his past!  A recurring joke is his fellow recruits remarking that, if his entire memory has been erased, he must have been a monster whose entire life was steeped in villainy.

Private Peace participates in some military campaigns on alien planets, then his ingenuity with electronics enables him to escape while on leave.  He is accused of being a homosexual child molester and flees into a women's lavatory where a hidden time machine transports him back in time, to a period not long before he joined the Space Legion.  He makes his way back to Earth and intercepts his younger self, learning the truth about his past, his bizarre name, and the history of the Space Legion.

Who Goes Here? brought to mind Harry Harrison: much of the novel feels like an homage to Bill the Galactic Hero and Deathworld.  One section seemed like an homage to Hollywood cartoons--Warren Peace is chased through a city by huge golden nude men called Oscars, and flees into a factory owned by the Acme Raincoat Company.

Some of the jokes, especially the satire of the military, feel like jokes you have heard before; e.g., the officers are all stupid or corrupt, the soldiers are issued equipment that doesn't operate properly, the Earth is the hypocritical capitalist imperialist instigator of the wars, etc.  Other jokes are extrapolations or responses to SF ideas, like the hypnosis used on the soldiers and the Legion's method of space travel.  Some of the gags are obvious or childish, like the officers punishing soldiers by making them twist their own nipples, and the recruit who doesn't know that "Terra" is a synonym for "Earth" and is perpetually confused by references to a place he's never heard of being what he is fighting for. 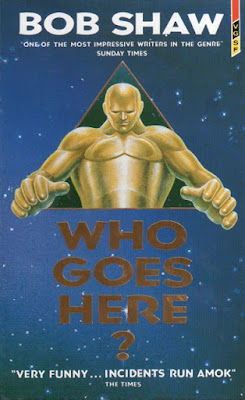 I probably would not have read Who Goes Here? if I had known it was an absurdist farce.  How much comedy do I need in my life?  Everybody on TV and in real life thinks he's some kind of comedian, everybody tries to be sarcastic and cynical and "ironic," everybody's idea of debating is to give his opponent some kind of derisive nickname. (I'm not exempting myself from this denunciation of our culture--I know I've filled this blog with dumb jokes, and those who have to suffer my company in real life know I have nothing to say and so hold up my end of the conversation with juvenile puns and supercilious comments.)  So, when I read fiction, I hope to find some genuine emotion or new ideas, and I avoid SF authors who have a reputation for writing broad farces and extravagant satires. Thus, Who Goes Here?, which is quite unlike the two Shaw novels I enjoyed recently (Orbitsville and Night Walk) was a bit of a letdown.

While a disappointment to me, I have to give Who Goes Here? a positive review; it is a good specimen of what it is trying to be.  Shaw is a good writer; he has a good style and he also is good at structuring a book, fitting all the pieces together smoothly. There aren't any boring or gratuitous sections, and he doesn't bog you down with unnecessary details, the book is just rapid fire jokes and a streamlined adventure plot, and I did actually laugh at some of the jokes.  Some elements of the novel show a high level of cleverness (a movie theater in which a children's film and a porno are projected simultaneously, and viewers are issued age-specific special spectacles to decipher the image) and creativity (a long list of strange monsters.)  There's even a traditional sensawunda ending in which it is hinted that our main character, with new found powers, is going to play a role in a radical change to galactic society that will bring peace and prosperity.  I can see why Who Goes Here? would be popular, and why a sequel would be published in 1993.

If you are looking for a silly jokey science fiction book, you should check Who Goes Here? out; it is certainly one of the better ones. 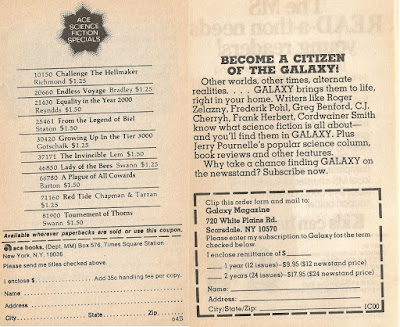 There are six pages of ads at the end of my copy of Who Goes Here?  I find the ad for Galaxy particularly interesting, because it gives you an idea which writers the people running Galaxy in 1978 (editor: John J. Pierce) thought would be a draw: Zelazny, Pohl, Benford, Cherryh, Herbert, and Cordwainer Smith, about whom I was recently gushing. 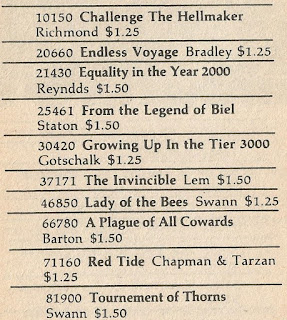 Also interesting, to me, is the ad for the Ace Science Fiction Specials, because I do not recognize any of the titles.  If you have read any of these, feel free in the comments to enlighten me as to how "special" they really are, and don't hesitate to warn me if any are outlandish farces.
Posted by MPorcius at 12:23 AM