The Future is Now part one: Young, "Anmar," Meredith, and Corwin 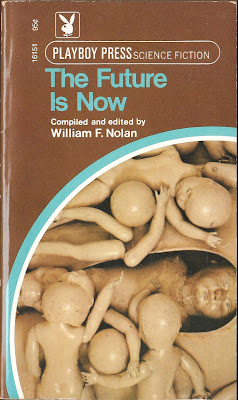 Our last three blog posts were about SF stories which first appeared (in America, at least) in our most pretentious skin rag, Playboy.  I read them in The Playboy Book of Science Fiction and Fantasy, published in 1966 by Playboy Press.  In the comments to the first installment of this three part series, SF fans George, marzaat and I talked a little about Playboy Press's SF line; when I revealed that I own 1970's The Future is Now, edited by William F. Nolan, marzaat expressed dissatisfaction with the volume.  This piqued my interest, and I decided to read the book myself.  Marzaat actually has a review of The Future is Now, but I am going to hold off on reading it until I have read the book's twelve stories and recorded my own thoughts about them over three blog posts.  In the final post, I'll talk about to what extent marzaat and I agree or disagree about the stories.

The Future is Now is not an anthology of stories from Playboy, which is what I thought it was when I bought it.  Rather, it is a collection of all new stories edited by Nolan and published by Sherbourne Press in hardcover in 1970.  The paperback Playboy Press edition I have was put out in 1971 and has a strange and unattractive cover that reminds me of that famous recalled Beatles record sleeve and perhaps is suggesting the stories therein are about overpopulation.  In his intro Nolan talks a little about the history of all-new SF anthologies, and the decline of the SF magazines, suggesting that the future of short form SF lies in books such as The Future is Now and not in magazines.

"The Ogress" by Robert F. Young

I recognize Young's name, but for some reason I've never read anything by him.  The intro to the story lists Young's influences and the various blue collar jobs he's held over his life.

"The Ogress" is one of those SF stories which explains the scientific facts behind an ancient legend.  (Just recently we read Ray Russell's story about the truth behind the story of the Fall of the Rebel Angels, and last year we got a scientific explanation from Edmond Hamilton for Norse mythology.)  You see, Grendel was real, a "superbeing" created by the collective mental energy of the superstitious local peasantry.  (Yahweh and Zeus, we are told, were also real for a time, until their creators became more sophisticated and ceased to believe in them.)  Unsophisticated people across the galaxy occasionally create such gods and monsters, giant-sized raiders who murder people and destroy property, and to deal with them the institution known as Galactic Guidance sends out expert hunters, the Beowulfs, who are armed with powerful firearms called Dammerungs.  The plot of "The Ogress" follows the hunt of one such superbeing, a female monster, by one such Beowulf.  Interspersed with the account of the hunt for the ogress are flashbacks to earlier hunts.

This is a decent adventure story.

"Jenny Among the Zeebs" by "Frank Anmar"

I don't recognize Anmar's name, but I have read things by him, because this is a story by Nolan using a pseudonym.  Tricksy!  The title makes me worry it is going to be a dumb parody story.  I don't want to endure another piece of junk like "Gorf! Gorf! Gorf!"

Well, it is not quite a parody, but it is a dumb joke story that pokes fun at rock music and modern art and has the kind of attitude about sex that nowadays would be considered evidence of "rape culture."  The plot is like that of an off-color sitcom with wacky schemes that fail and mistaken identity hi-jinks. 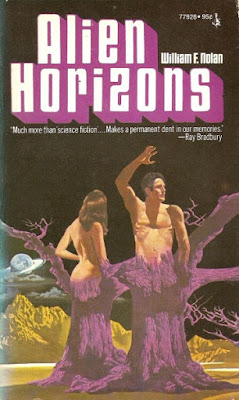 Our narrator, Hoff, is the Earthling PR man for the Red Dogs, a Martian rock group.  (Martians, called "zeebs," can interbreed with Earth humans, but are physically different from us; most importantly for this story, they have four buttocks instead of two.  These are the kinds of jokes Nolan offers us.)  Hoff uses lots of slang, which is a little annoying.

Hoff has launched a PR stunt--one of the four Red Dogs will marry the Earth girl who writes the best application essay.  While this stunt is underway, an artist, a pretty Earth girl, serendipitously shows up and provides Hoff an opportunity for another stunt.  This artist, Jenny, specializes in making plaster casts of people's asses, and she wants to make casts of the Red Dogs' asses; Hoff has the idea of using the casts to produce chairs to sell to the Red Dogs' fans.  The Red Dogs are shy, and only agree to let Jenny make their casts in a darkened bedroom, one at a time.

The main plot of this unfunny and nonsensical story revolves around the fact that in the darkened room one or more people had sex with Jenny, a virgin before she met Hoff and the band, and is now pregnant, and Hoff has to figure out how to deal with this potentially troublesome situation.  It doesn't make any sense that Jenny doesn't know who had sex with her, because she called the bandmembers into the dark room one at a time, and Nolan further cheats us readers by leading us to believe that only the Red Dogs got casts of their asses made, and then later revealing that Hoff and the band's manager also had casts made.  Why would Jenny want casts of the asses of the band's PR guy and their manager?

"Jenny Among the Zeebs" would be republished in two collections of stories by Nolan, 1974's Alien Horizons and 2005's Wild Galaxy.  I see that these collections also include "Gorf! Gorf! Gorf!" under its alias "The Day the Gorf Took Over."  Tricksy!

I got interested in Richard C. Meredith when Joachim Boaz wrote about his novel We All Died at Breakway Station but I couldn't lay hands on that novel and so instead read the first two of Meredith's three Timeliner books, At the Narrow Passage and No Brother, No Friend.  For some reason I never got to the third one, but tarbandu read all three.  Like Nolan, Meredith has an association with Playboy, Playboy Press having put out an edition of the Timeliner books.  Nolan here tells us interesting little tidbits about Meredith's academic, business and writing careers.

Nolan lists Astounding among Meredith's influences, and "Earthcoming" does have an Astounding feel to it.  There is lots of hard SF talk about orbits and astronomical distances and the chemistry of space drives and so forth, and the story integrates the point of view of a hostile alien seeking to infiltrate the Earth, like what A. E. van Vogt does in the classic "Black Destroyer" (1939) and "Asylum" (1942), both Astounding cover stories.  (I read the original magazine version of "Asylum" today to refresh my memory of it, and was amazed to find a hotel named "Constantine's" figures prominently in it, while Meredith's "Earthcoming" features a planet called "Constantine!"  Coincidence?  Well, the evil aliens in "Asylum" are the "dreegh" and the good aliens the "lennel," while the evil aliens in "Earthcoming" are the "druul" and the good aliens the "luntinasel."  Both stories include cargo ships, van Vogt's captained by a Hanardy and Meredith's captained by a Haledon.  Lots of coincidences, or sign that this is an homage to our favorite Canadian?)

Earth, allied with some friendly aliens, is at war with evil parasitic aliens, the druul.  Meredith's story takes place on a cargo ship bringing valuable fuel from beyond the solar system to Earth for our war fleet.  Unfortunately for us, one of the crew members of the cargo vessel has had his body invaded and taken over by one of the druul, and, if this druul can get to Earth, it can release a hundred spores which will in turn take over a hundred more humans!  In less than a year all of Earth could be under the control of the druul and the human race kaput!  "Earthcoming" is written in the third-person, but our main character is the alien, and we learn all of his inner thoughts and various doubts as he struggles to accomplish his mission and deal with aspects of the personality of the man whose body and mind he has hijacked.  Most of the text, it feels like, is devoted to the technical issues of steering the ship, but Meredith also describes in gory detail the many injuries suffered by the characters.  The story ends when the druul, in the battered body of the human, crash lands on Earth.  As he has touched ground in an uninhabited arctic wasteland and his host body is incapacitated, I think we are supposed to understand that his spores can reach no hosts and thus Earth is safe.

This story is actually pretty good.

Corwin is a famous and important broadcaster and Hollywood screenwriter of whom I had never heard; it seems he did a lot of work with government entities and the United Nations creating radio programs designed to "build world unity" and that kind of thing.  In the early 1980s he published a best-selling book attacking American culture.

"Belles Lettres, 2272" is a lame joke story.  I feel that Corwin is one of those men who was a giant in his day but will be quickly forgotten, in part because much of his work is in an obsolete medium, so it is perhaps appropriate that much of the humor of this story derives from the idea that people in the future won't remember much about the major figures or artistic productions of our time.  The form of the story is that of a letter written from one computer to another which includes extensive quotes from a third computer (a poem by said computer) and a fourth computer (an analysis of the poem.)  The story includes lots of pictographs or logograms that, I guess, we are to believe are commonly used in the written communication of the 23rd century: 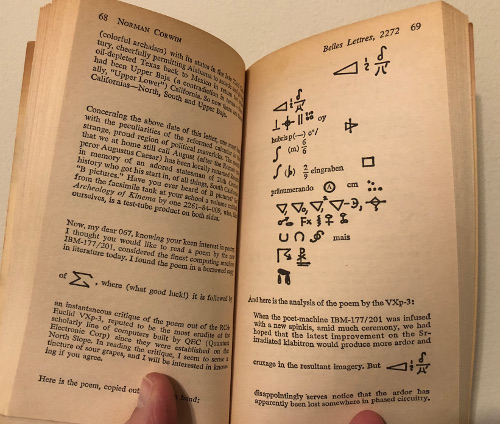 The punchline of the story is the letter writer's complaint about obscurantism.

Only four pages, but still a waste of time.

Well, we've got two duds so far, but also two decent traditional SF adventures full of sinister creatures, high technology and bloodshed.  We'll continue our look at The Future is Now in our next episode!
Posted by MPorcius at 12:01 AM