A Yank at Valhalla by Edmond Hamilton

Loki shrugged.  "There can be no great victory without great danger, outlander.  I had a vision of leading the Aesir to undreamed-of heights of power and wisdom, though by a road beset with vast perils.  I was willing to risk those perils, to be great or to die.  But dull Odin blocked my path." 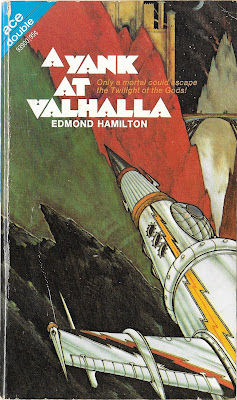 Ace Double 93900 was offered to the public in 1973, and included material that was first printed in SF magazines in the 1940s and 1950s.  Let's take a look at MPorcius fave Edmond Hamilton's contribution, 1941's A Yank at Valhalla, whose title, I guess, is a play on that of the 1938 film A Yank at Oxford and/or Mark Twain's A Connecticut Yankee at King Arthur's Court.  1941 also saw the release of the war movie A Yank in the R.A.F.  Those Yanks are always sticking their noses in someplace!  A Yank at Valhalla was published entire in a single issue of Startling Stories, and in 1950 a book version appeared in the UK under the title The Monsters of Juntonheim.  The story was reprinted in 1953 in Fantastic Story Magazine, billed as a "Book-Length Science Fiction Classic."

Keith Masters, the novel's narrator, is a scientist working with an international team in the Arctic in some unspecified near future.  He feels a strange urge to trawl an unremarkable patch of ocean, and, like might happen in a Lovecraftian story, an ancient artifact with Scandinavian-style runes on it is recovered; the runes indicate the item is a key, the key to the prison of Loki, Fenris, and the Midgard serpent!  Our man Keith starts wearing the key around his neck on a string. All the time he has the key on his person he feels powerful competing inclinations, apparently the work of opposing psychic entities--one of the forces encourages him to throw the artifact back in the ocean, while the other urges him to cherish it.

Keith's team has a "rocket plane" and our narrator, who is an expert pilot as well as physicist and swordsman, takes off alone in the machine to scout out a route for the expedition's dog sleds.  Out of a clear blue sky a tremendous storm erupts, forcing Keith to land in a strange hidden world that, because of radiation that warps light waves, is essentially invisible to outsiders.  Here Keith finds a civilization whose attributes all match that of Norse mythology, from the fortified city of Asgard, connected to the mainland of Midgard by the rainbow bridge Bifrost, to its blonde inhabitants, among them temperamental Thor and beautiful Freya.

A number of Hamilton's stories have as their basis weird theories about radiation and evolution (check out "The Man Who Evolved," "The Accursed Galaxy," and "Devolution," three 1930s stories selected by science-obsessive Isaac Asimov for his Before the Golden Age anthology) and the foundation of A Yank in Valhalla is the same kind of theory.  After introductions are made, Odin himself explains to Keith the history of his people, the Aesir, and the scientific factors behind that history.

Human civilization, the one-eyed king of the Aesir relates, began not on Earth's surface but underground, thanks to radiation from subterranean rocks that created life and accelerated evolution far beyond the pace on the surface by fostering a very high number of mutations.  Odin's people had an advanced technological civilization down there while your ancestors and mine on the surface were still "wandering, half-animal savages"!  Hey, Odin, check your Aesir privilege! 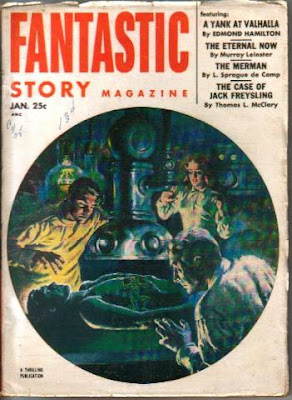 Stung by Odin's contempt for us surface people, you might ask, if the Aesir are so damned advanced, why are Freya and Thor riding horses and fighting with swords and hammers instead of riding segways and fighting from a safe distance with cruise missiles and drones like civilized people?  Well, it's not because Hamilton felt like writing a sword-and-planet story instead of a space opera this time out, of that I can assure you.  It is because the Aesir learned that messing with science can have terrible consequences!  A great Aesir scientist decided to tinker with strengthening all that radiation in hopes of making the Aesir immortal!  Unfortunately, he overdid it, unleashing way too much radiation, and the Aesir had to flee to the surface, where they founded Asgard. With the Earth's crust damping the radiation, the scientist's aim was more or less achieved: the radiation kills all germs and constantly regenerates human cells, so nobody in Asgard ages or gets sick.  The downside is that almost everybody is sterile and few Aesir have been born in the last two thousand years.

I wondered if, as in that famous story by another Ohio-born SF icon, A Boy and His Dog, the virile outsider, our man Keith in this case, might be called upon to impregnate the local population, in this case a legion of blonde super model types! When it was revealed that the novel's Freya (whose slender body Hamilton keeps telling us about) is not the famous Freya of myth but her 20-year old granddaughter and Keith started making the moves on her, it seemed that Keith was getting off to a good start!

As many readers will have already guessed, on page 35 of this 128-page novel we learn conclusively that that reckless scientist was Loki and that as Odin puts it:


"It was Loki's power that brought you [our pal Keith!] and the rune key here.  Yes, from the gloomy prison where his body lies helpless, Loki's mind reached forth through his deep craft of scientific powers.  He caused you to fish that rune key from the sea, and raised the storm that blew you hither."

And so, just as Keith and Freya's interracial romance is blossoming, a commando squad of Jotuns (the barbaric black-haired surface people with whom Loki is allied) pulls an Otto Skorzeny on the Aesir and captures the blonde bombshell and the rune key!  The Jotuns also steal Keith's rocket plane and defeat Frey's ship in a naval battle, so the only way to get to Loki's force field prison before the Jotuns can free him is to crawl and trudge through a series of caves, a journey Keith and Frey (this guy is Freya's grand-uncle or something) immediately embark upon.  Luckily Freya was friendly with the Alflings, the isolationist dwarves who inhabit the caves and have kept their distance from the Aesir-Jotun war for two thousand years.  These nativist gnomes exact a border tax on all who enter their tunnels, but they need only exact it once on each visitor, because it is a sentence of death!  Because Frey and Keith are on a mission to rescue Freya, whom even these weirdos liked, they usher our heroes through to the subterranean prison of Loki and his fiendish pets.

Loki's psychic powers prove too much for our heroes, and Frey and Keith join Freya in a cell of their own while Loki is liberated from his.  Keith is granted an audience with Loki.  Hamilton portrays Loki as a kind of mad scientist who feels he could have lead the Aesir to great power and knowledge if it hadn't been for Odin's conservatism; Loki and Odin are contestants in the sort of debate we see in politics and economics throughout history and in our own individual lives, the debate between risk-taking adventurism and prudent caution, between visions of an ever-evolving progressive society and an ambitious and dangerous life and those of a safe and stable society and a calm and comfortable life.  An adventurer and scientist himself, Keith is not wholly immune to Loki's appeals when Loki tells him "we two are more akin than any others in this land" and asks Keith to become his right-hand man and his only friend.  (Loki has a gorgeous princess of his own, black-haired Hel, but she he dismisses as "a wicked wildcat who can never learn my science."  Sounds sexy, though!)  Of course our man stays true to Odin, Thor, Freya and the rest, who were so welcoming to him.

The captives escape in Keith's rocket plane, and, back in Asgard, Keith and Thor go on a dangerous mission to get material needed to reactivate one of Odin's ancient high-tech weapons.  Then comes the titanic battle between the armies of Odin and the Aesir and Loki and the Jotuns; Keith participates in the cataclysmic struggle as both a fighter pilot and a swordsman.  In the end the whole secret world is destroyed in a cataclysmic explosion, with only Keith and Freya escaping with their lives in Keith's rocket plane. 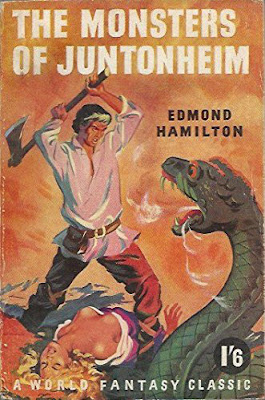 A Yank in Valhalla follows the Edgar Rice Burroughs format of a smart brave guy going to another world, being embraced by its establishment and championing that elite in a war with barbarians and/or radicals.  It also reminded me of one of Michael Moorcock's John Daker books, I guess 1970's The Eternal Champion, in which (if my 30-year old memory of reading it serves) the Eternal Champion has to choose sides in a genocidal war between the elfin Eldren and the human Mabden; aircraft, radiation and ancient super weapons figure in that novel, as they do in A Yank in Valhalla.  Is there any possibility that Moorcock, who has effusively praised the work of Hamilton's wife, Leigh Brackett, and admitted to her influence on him (check out his essay, "Queen of the Martian Mysteries"), was influenced by A Yank in Valhalla in writing that novel?

I don't know enough about Norse mythology to be impressed or offended by Hamilton's use of it, so I have to put that aside.  Judged without any special Norse knowledge, A Yank in Valhalla is a quick-paced and fun adventure story in an interesting setting, with good battle scenes and, in Loki, a good villain.  Definitely recommended to fans of this sort of material.
Posted by MPorcius at 11:24 PM