Son of the Tree by Jack Vance

"I order you!" exclaimed Elfane.  This was fantastic, insane--contrary to the axioms of her existence.

Elfane dismissed the paradox from her mind.  She turned to Manaolo. "Kill him here then.  His corpse, at least, will provoke no speculation."

Manaolo grinned regretfully.  "I'm afraid the clobberclaw is aiming a gun at us.  He will refuse to let me kill him."

Elfane tightened her lips.  "This is ridiculous." 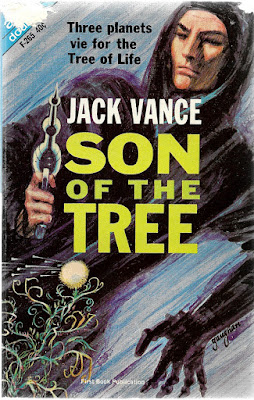 April, famously the cruelest of months, has been Ace Double Month here at MPorcius Fiction Log, and here is our final Ace Double (for the time being, at least), Son of the Tree by Jack Vance, half of my battered copy of 1964's F-265.  The other side of F-265 is The Houses of Iszm, and both novels are adorned with a Jack Gaughan cover highlighting energy pistols and a small charming interior illo, also by Gaughan. Son of the Tree first appeared in 1951 in Thrilling Wonder Stories, where it was lead story, and has been reprinted numerous times.  In the period before I started this blog I read lots of Vance, but I never got to Son of the Tree, so I am looking forward to this.  isfdb says Son of the Tree is part of the Nopalgarth Series, along with Houses of Iszm and Nopalgarth; I know I read Houses of Iszm but suspect that, like Son of the Tree, I never read Nopalgarth (AKA Brains of Earth.)

Joe Smith is travelling across the galaxy on passenger starships.  At each planetfall he works for a while to accumulate enough money to take the next leg of the trip, hypnotized and shipped practically dead as cargo in the hold with scores of other such lower ranked passengers.  Thusly he has journeyed so far from his home planet of Earth that the people he meets think Earth is a mere myth.

Whoa!  This sounds a lot like the premise of E. C. Tubb's Dumarest of Terra series!  Is it possible Tubb was influenced by Son of the Tree?  I feel like a detective!

As the 111-page novel (novella?) begins, Joe arrives on planet Kyril, where two million aristocratic priests (called "Druids") lord it over five billion impoverished serfs (the "Laity.")  At the center of the planet's capitol city and its culture is a tree bigger than a skyscraper that the people worship--they think that when industrious workers die they become one of the three-foot leaves on the tree (slackers become "rootlets" mired in the "slime.")  One of the strategies the Druids employ to maintain control of the Laity is to keep the planet at a low technological level, so Joe, who has a technical background, easily finds a job as a chauffeur among the elite because he is able to improve on the shoddily cobbled-together aircars used by the Druids. 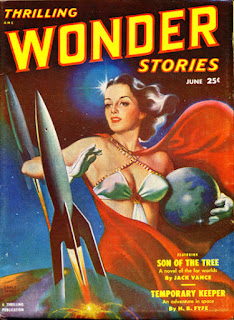 Like a lot of Vance books, Son of the Tree takes place in a future in which mankind has spread throughout the universe, and enough isolation, mutation and evolution has taken place that new races or subspecies of humans have developed. One of the first people Joe meets on Kyril is Hableyat, a Mang, one of the yellow-skinned people of planet Mangste.  Kyril is involved in a sort of Cold War with Mangste, a modern industrial world, and the Druids assume all Mangs on Kyril are spies. Working in the household of an important Druid, and being friendly with Hableyat, Joe quickly gets embroiled in life-threatening intrigue between different ruthless factions of Druids and Mangs.  Complicating matters is the fact that Joe falls in love with one of the callous aristocratic Druids, the Priestess Elfane, even though she is willing to kill the Earthman to pursue her goals and is involved in some kind of relationship with the equally ruthless Eccleasiarch Manaolo.

Joe, Hableyat, Elfane and Manaolo all take passage (not in the hold, but awake) on a starship headed for the planet Ballenkarch.  The people of Ballenkarch are politically and economically primitive, but rapidly developing and a source of raw materials and manpower, and both Kyril and Mangste hope to manipulate the planet to aid their side in the cold war (perhaps Vance is referring here to the role in the real-life Cold War played by places like Africa and the Middle East.)  Elfane and Manaolo have with them a shoot from their divine Tree (the "Son" of the title), and hope to plant it on Ballenkarch and convince the natives to worship it and join Kyril in a kind of religious union.  Hableyat's faction of Mangs and another, perhaps more influential, faction of Mangs disagree on how to respond to this Druid scheme, and both parties are willing to go to any length to enact their policy.  Joe is right in the middle of this multi-sided conflict among cold-blooded killers, not really caring about the Kyril-Mangste struggle but instead hoping he can convince the alluring Elfane to be his lover and the clever Hableyat to be his friend and that the three of them can leave all this murderous intrigue behind and go together to an easy life on the peaceful Earth.

As the Druid-Mang-Ballenkarch plot progresses Vance fills in the blanks of Joe's past and we slowly learn why Joe is crossing the galaxy, leading us readers to wonder if perhaps Joe in his own way is as fanatical as Elfane and as manipulative as Hableyat. On Ballenkarch the plot threads reach their violent conclusions, Joe learns the true natures of the elites of the three planets, and the main characters make decisions about how they want to live the rest of their lives.

Son of the Tree is a great thriller set in a vivid alien environment, full of Vance's signature witty dialogue.  Vance's style is often compared to that of the great P. G. Wodehouse, and the comparison is very appropriate: Son of the Tree, like so much of Vance's work, is a pleasure to read, almost regardless of the plot.  Not to criticize the plot of Son of the Tree; the story moves smoothly, all the twists and revelations are perfectly paced to maintain reader interest and all the characters' motivations and interactions with each other are interesting and entertaining.  A fun book that gets my enthusiastic endorsement.  I suggest you overcome your love of Jack Gaughan, however, and get a 21st-century edition of the novel that uses the Vance Integral text--my 1964 copy is full of typos.
Posted by MPorcius at 11:47 AM