Dwellers of the Deep by Barry N. Malzberg (plus The Day of the Burning)

"You don't say?" Stuart says.  "That's very interesting.  That's one I never heard of before.  Must be very tough for you, hey, Izzie? Aliens!  Seizing your mind!  Imagine that."

"He's bearing up very well," Susan says.  "But he needs help and I thought the Solarians could give it to him." 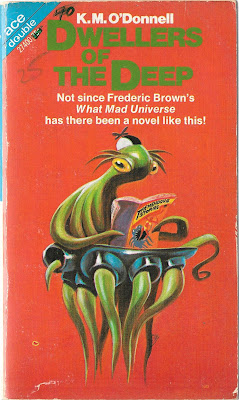 Do I love Barry Malzberg?  Of course I do. But that love does not blind me to those of his idiosyncrasies which might fairly be considered faults.  One such fault?  Our man Barry, resident of the great state of New Jersey lo these many years, former employee of the New York City government, has produced a prodigious volume of salable writing, but one strategy that has made his tremendous output possible has been the recycling of plots and themes.  For example, here at MPorcius Fiction Log we have read numerous stories by Malzberg that feature hypnotherapy that allows the patient to experience socially unacceptable sexual liaisons and acts of violence.  Another plot Malzberg has reused has been the one about an astronaut who goes crazy and kills his comrades or bombs the Earth or both.  And those aren't the only plots Malzberg has used more than once.

In the 1990s there were some rumblings among temporarily ascendant dissident factions of the New York City government that there might be some reforms made to CUNY.  CUNY professors and administrators, including those in my office, sprang into action to prevent any such reforms, and I did some work on a research project which consisted of calling up and interviewing people who had dropped out of CUNY without earning a degree.  No matter what these people said (many told me that CUNY had been just like high school, with nobody taking classes seriously), in our report they played the role of grateful alums asserting that the CUNY experience had wrought a vast improvement in their lives, even though they had not graduated from CUNY, and thus no reforms were necessary.  Of course, their names didn't appear in the report and there were no recordings of the interviews, so our report was about as verifiable as an urban legend related via a friend of a friend, or as my little anecdote here.

Dwellers of the Deep takes place in the summer of 1951.  Our hero, 23-year-old Izzinius Fox, like an alternate reality MPorcius, a few months ago quit his city job conducting fraudulent interviews of "dispossessed or evicted welfare recipients...."  Why did he quit?  To collect unemployment compensation ("it would last at least twenty-six and possibly fifty-two weeks" and "cover his rent and food nicely") and devote himself full-time to collecting science-fiction magazines!

Malzberg seems to have chosen 1951 as the setting for his novel because this was a time of ferment in the science-fiction community. In this novel the leading SF magazine, Tremendous Stories, is being challenged by Thoughtful Stories and Thrilling Stories, periodicals which have more "prestige" than Tremendous and have stolen most of Tremendous' famous contributors.  The SF world is also embroiled in a dispute about the theories of SF writer Cupboard, who has recently published non-fiction articles with titles like "A New Engineering of the Mind."  You probably already realize this is all a parody of the once dominant Astounding facing competition from Galaxy and F&SF and of L. Ron Hubbard's Dianetics articles.

Fox fears he may be going insane, and well he might: periodically his consciousness is transported as if by magic to a space ship where aliens who claim to be minor civil servants of a galactic union demand he hand over a copy of the aforementioned article, "A New Engineering of the Mind."  If he does so, he is told, the aliens will bring peace and prosperity to Earth via membership in the Galactic Federation, but Fox does not trust them and refuses to cooperate, causing the aliens to threaten to resort to coercive measures.  These "Interceptions," as Fox calls them, last a maximum of ten minutes, but when he is returned to his body on Earth he finds no time has passed.  In fact, one Interception takes place while Fox, a virgin, is in the arms of Susan Forsythe, a bespectacled and large-breasted SF fan who is always trying to get Fox to join her fan group, the Solarians, and she doesn't even notice his disappearance and return!  Shaken by this Interception, Fox puts his makeout session with Susan on hold so he can describe to her his incredible problem.

With the single-mindedness we sometimes see in women trying to change men, Susan doesn't dismiss Fox's experiences as delusions, but instead uses them as a lever to get him to come to tonight's meeting of the Solarians!  She thinks "Izzie" should tell the Solarians his story, that maybe they can provide him useful advice!  The Solarian meeting, however, collapses in rancorous internecine warfare before Fox can relate to them his incredible tale.  (Presumably the passionate disputes among SF fans in Dwellers of the Deep are a satire of the famous strife in New York City SF fan circles in the 1930s, when Marxist SF fans like Donald Wollheim broke with Sam Moskowitz's Greater New York Science Fiction Club to form the Futurians, whose members included Communist Party member Fred Pohl and Trotskyist Judith Merrill.)

After the Solarian fiasco, Susan takes Fox to see the leader of the splinter group which has broken off from the Solarians, a Miles Graffanatis.   In the story's climax, Fox learns, or has the delusion that, Graffanatis, along with Susan, is a collaborator with the aliens. Graffanatis, a four-hundred pound chain smoker, tells Fox that the aliens have stolen the Cupboard article from Fox's apartment, making both the aliens' efforts to convince him to voluntarily hand over the article, and his resistance, pointless.  This sort of undermines the whole plot, and I can't deny that the novel peters out limply here in the last dozen pages or so.  The real climax of Dwellers of the Deep is the wild meeting of the Solarians, or the section that follows the meeting, Malzberg's satire of Dianetics and Astounding editor John W. Campbell, Jr.'s support of Dianetics. Cupboard's "A New Engineering of the Mind" argues that all of society's problems are the result of obsessions with sex, and calls for extreme measures to suppress the sex drive. I am guessing this is a jocular reference to the views expressed by top SF writers like Robert Heinlein and especially Theodore Sturgeon, who felt that society's problems were caused by sex taboos and repression of sexual desire.

Despite its somewhat weak ending, Dwellers of the Deep is a fun book, full of fun little jokes and funny characters, most of whom I haven't mentioned (let's mention some of them: Susan and Izzie's insane landlord; Fox's overbearing mother; a fantasy version of Fox's deceased father who is obsessed with the roller derby; and Stuart Wiseman, a bookseller who always tries to overcharge Fox.)  Fox himself is a fun character, a decent enough and smart enough chap but a weak-willed loser from a line of losers who is manipulated by women and businessmen and government bureaucrats, a protagonist more interesting, more believable and more deeply realized than a lot of those we find in Malzberg's body of work.  Of course, any story set in beautiful New York City, where people live in little apartments and ride the subway, tugs at my exile's heart.  Fans of classic SF will perhaps enjoy trying to spot Malzberg expressing his own opinions, roman a clef style, about Golden Age SF; for example, when Fox says "Damon Tyson's" "Parking Ticket" is "lousy," is this SF critic and historian Malzberg hinting that he thinks Damon Knight's famous "To Serve Man" is overrated?  Besides Hubbard, Campbell, and Knight, Malzberg makes veiled references to Isaac Asimov and MPorcius faves A. E. van Vogt and the Kuttners, and no doubt others I didn't grok. 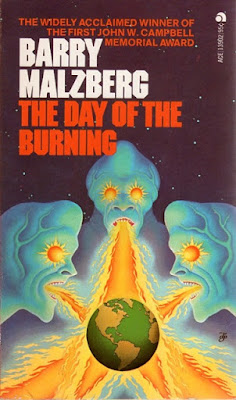 In 1974's The Day of the Burning Barry Malzberg uses a gimmick we have all seen on a hundred TV shows - George Mercer has a "friend" whom only he can see or hear, a sort of demon called Lucas. Lucas hangs around George, invisible to everyone else, yakking away and distracting George while George tries to complete his work at the office or complete the sex act with Delores, a fellow office worker. Of course, everyone suspects George is insane because he is always talking to himself.

In The Day of the Burning Malzberg endeavors to subvert SF conventions, and, apparently, commonly held notions about government. George is obviously mentally ill - Lucas is a delusion and the idea of Galactic Overlords some sort of fantasy. The test these Galactic Overlords set for George is not any kind of quest or adventure or duel, but rather that he complete one of his office tasks. Malzberg slips into the novel some sarcastic complaints about his editors and readers - we are told that the Galactic Overlords (the novel is ostensibly a report written by George to these Overlords) dislike first person narratives, non-linear chronology and use of the present tense, the very literary techniques Malzberg customarily employs, and prefer the straightforward plotting and action scenes that almost never appear in Malzberg's work.

The narrative is sprinkled with passages related to a subplot about failed space missions to Mars and Venus (the futility of the space program is a recurring theme in Malzberg's writing) and widespread riots and terrorism in U.S. cities. A general theme of the book is the inability of the government and its bureaucracy to accomplish much of anything, be it quell terrorism, send astronauts to other planets, or administer welfare benefits efficiently (George works in the New York City welfare department). The government's incompetence is matched by George's own lack of ability to accomplish anything in his career or his social and erotic life.

I appreciate what Malzberg is trying to do in The Day of the Burning, and he is certainly effective in generating an atmosphere of hopelessness, but the book is a little long and some sections seem to drag and bored me. I guess I can recommend it to Malzberg fans.

I read the 1974 paperback from Ace with the full color ads for Kent cigarettes bound in the center and ten pages of ads for more famous SF writers than Malzberg at the end. This edition seemed to have lots of typos.
Posted by MPorcius at 1:38 AM