He was filled with remarkable emotions.  Marian was again out of a predicament in which the folly of other men had involved her.  He and he alone had proved capable of action to get her out.  He was succeeding. 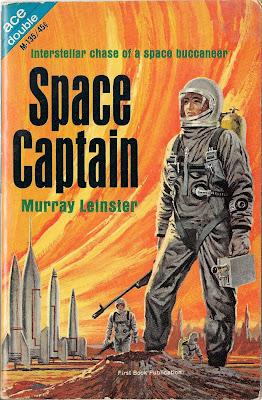 It's time to read some Ace Doubles! Way back in early 2016 I read Philip E. High's The Mad Metropolis in its Ace Double 1966 incarnation.  Let's flip M-135 over and start this series of examinations of Ace Doubles with Murray Leinster's Space Captain. We've got a fun astronaut-with-camera-and-rifle cover by Gray Morrow, and on the first page of the text a beautiful drawing (maybe by Jack Gaughan?) of a back lit astronaut in free fall which I absolutely love; unfortunately some sort of printing error mars my copy's reproduction of this illustration.

Alright, on to the text itself.  It is several centuries in the future, and mankind has colonized much of the galaxy.  Space pirates are making trade impossible in the Pleiads star cluster, but the owners of the starship Yarrow hire Captain Trent to skipper the Yarrow on a trading mission to the Pleiads--he and the owners can make some serious mullah if he can pull off this risky operation, and because the Yarrow has been equipped with a secret weapon that can hopefully turn the tables on the rapacious pirates, the owners think Trent has a good chance of success.

The secret weapon may not be all it is cracked up to be, but Trent uses various ruses and improvised weapons and he and his crew, over the course of two naval battles and a climactic commando raid, defeat the pirates and bring peace to the Pleiads.  Trent finds time in this 105-page tale to fall in love with Marian, the daughter of a planetary president. 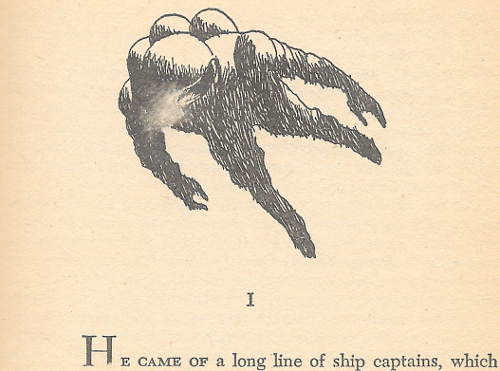 Leinster seems to have conceived of this story after reading some books about maritime history--the Trent family has been in the captain business for a thousand years or so, and everything that happens in the novel is compared to merchant shipping in the 18th-century or naval warfare during the World Wars:


The report of a reading on the drive detector was equivalent to a bellowed "Sail ho!" from a sailing brig's crosstrees.  Trent's painstaking use of signal-analysis instruments was equal to his ancestor's going aloft to use his telescope on a minute speck at the horizon.

Trent's several-times-great grandfather would have kept his crew chipping paint or tightening or slacking off stays to adjust to differences of humidity from day to day.

It was possible for him to maneuver in a fashion peculiarly like a submarine--one of those fabulous weapons of the last wars on Earth--submerging to get out of sight....

A book about a starship on a dangerous voyage getting involved in battles, inspired by real life tales of the high seas, is a great idea, and particularly appealing to me: over the course of my life I've read numerous books about Drake, Cook, Bligh, and Nelson, and about WWII naval and aerial warfare, as well as a stack of those Patrick O'Brian novels, and, during the life of this blog, two different novels (The Cruel Sea by Nicholas Monsarrat and H.M.S. Ulysses by Alstair MacLean) about Royal Navy officers serving in the Second World War.  So it is very disappointing to find this book's solid idea and serviceable plot undermined by its very poor style.

I've read four novels by Leinster in the past, and I wasn't really expecting Space Captain to be well written, but I was astonished at how badly written it was--it is like some of the student papers I've had to read in my career on the fringes of academia. Sentences are short but vague instead of direct, and important information is withheld for no narrative reason.  Other pieces of information are provided to us again and again, as if Leinster thinks we might have forgotten what he told us just one page ago. The same words and phrases are used again and again, and the same metaphors crop up repeatedly.  I wondered if an amateur had ghost-written this thing, or if Leinster had had to lengthen an earlier draft (Space Captain first appeared in 1965 as a serial entitled Killer Ship spread across two issues of Amazing, and a note on the publication page of my copy of this Ace edition informs us that the Amazing version was shorter) and did so by just peppering the text with superfluous verbiage.  I also considered the possibility that Leinster, almost 70 when Killer Ship appeared in Amazing, was getting a little senile when he wrote it. 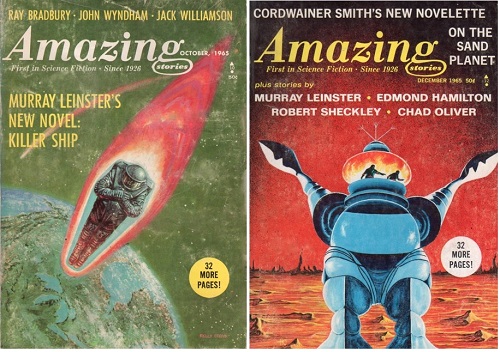 The characters in Space Captain are totally lifeless; they have no personality, their motives barely register, and the stuff they do sometimes makes little sense. Everybody in the novel, excepting Trent, acts like an imbecile.  The crew members of the Yarrow aren't even given names, and the romance between Trent (whose first name we never learn) and Marion is so perfunctory that I don't even know why it was included.  The novel has no human feeling, and the pacing is totally flat; Space Captain reads like a bland newspaper story about colorless people you've never heard of and will never hear about again.

Another Ace Double in our next episode!  (Let's hope something better!)
Posted by MPorcius at 6:20 PM