"Emotionally, spiritually, morally, intellectually you remained immature, with only one aim: pleasure--crude, immediate pleasure.  There's nothing in you of timeless serenity, the spirit of contemplation.  No wonder you're bored.  The boon of immortality is wasted on you.  Let me have it." 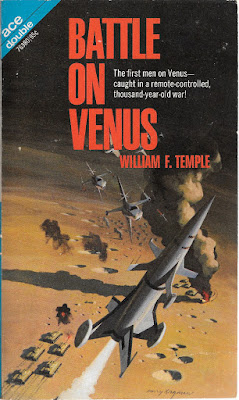 Let's continue our look at Ace Doubles with 76380 from 1973, starting with William F. Temple's Battle on Venus.  Battle on Venus actually was featured in two Ace Doubles, first in F-195 in 1963 (paired with Robert Silverberg's The Silent Invaders) and then ten years later in the book I own, which includes two Temple novels, the other being The Three Suns of Amara, first published in 1962.  (If Battle on Venus isn't terrible, in our next episode we'll talk about The Three Suns of Amara--no pressure though, BoV!)

Captain Jonah Freiburg, a middle-aged veteran of many risky space flights who is "losing his nerve," is the commander of the first Earth expedition to Venus.  Along for the ride with the astronauts is George Starkey, a young and optimistic "professional explorer."  When their ship breaks through the cloud layer that surrounds Venus it is immediately fired upon by anti-aircraft guns, and when the ship makes an emergency landing the crew is subjected to an artillery barrage and then surrounded by tanks!  The Earthers become the center of a battle between unmanned drone armored columns, and while the side protecting them wins, they suffer fatalities and their space ship is damaged.

Starkey takes the ship's helicopter and goes to look for Venusian natives, and, though his chopper gets shot down, he does meet some.  Luckily, the Venusians he meets aren't lizardmen or insectmen or blobpeople or anything like that--the first he meets is Mara, a beautiful and intelligent young woman, apparently the sole survivor of her village, and she and Starkey begin a love affair.  Soon the lovebirds meet Senilde, an immortal genius who has been the dictator of Venus for thousands of years.  He exterminated almost all Venusians centuries ago (those dense clouds are the residue of his genocidal poison gas campaign) and the worldwide war between armies of robot AFVs and aircraft is a game he cooked up for his own amusement.  Battle on Venus turns out to be like one of those Star Trek episodes in which the crew of the Enterprise meet a mischievous and amoral immortal (that's like half of them, right?)  Then the wisest man from Mara's village, Leep, a mystic who has psychic powers, shows up and matches wits with Senilde, hoping to attain the secret of immortality for himself.

Starkey, Mara, and Freiburg manage to get back to Earth to live happily ever after, but the fate of Senilde and Leep is unknown--as the Earth ship leaves, Venus is engulfed in an inferno of nuclear explosions as Senilde makes a last ditch attempt to stop the Earthlings (and the last of Venus' hot chicks!) from escaping.

Battle on Venus feels short and quick (it is like 105 pages of text), and is a pleasant entertainment.  I appreciated that Temple tried to give each of the named characters a believable personality and motivation, and addressed psychological and philosophical issues, however shallowly, in the context of what is essentially a light adventure. Also, we are always hearing how "old" SF either has no women characters or features females who are merely damsels in distress, but Mara is smart and independent and solves problems and makes bold decisions.  A minor novel in the scheme of things, but enjoyable.  The Three Suns of Amara, here we come!

There are three pages of ads bound in the middle of Ace Double 76380; let's look at the titles the Ace people were pushing on the page headed, "The World's Best Award-Winning Science Fiction Comes from Ace." 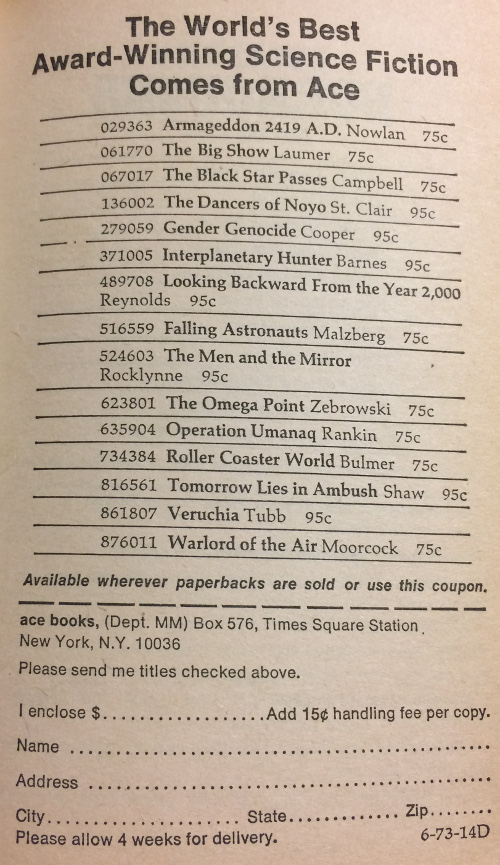 Ace's Armageddon 2419 A. D. is a sort of fix-up or consolidation of two stories by Philip Francis Nowlan from late 1920s issues of Amazing Stories which constitute the first appearances of Buck Rogers.  I have often considered reading this (or the originals, available for free online) but have yet to do so.  The Ace edition advertised has a pretty cool cover, depicting a dirigible-like aircraft attacking a ground target with a lightning-like weapon, but the cover on the earlier Ace edition (F-188) featuring jetpack-equipped infantry (including a woman!) is even better. 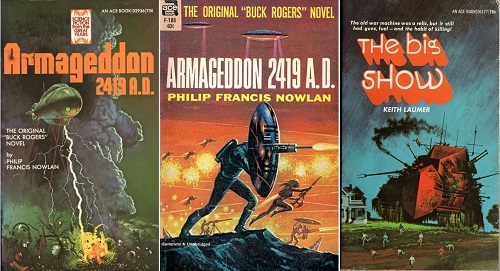 The Big Show by Keith Laumer is a book I owned at some point, and I love the cover, but I can't find it on my shelves now; maybe I sold it when I left New York.  Laumer is one of those writers I want to like, and the profile of him in Charles Platt's Dream Makers: Volume II makes him seem like a strange and fascinating figure, but most of the stuff I have read by him was just OK.

The Black Star Passes by John W. Campbell, Jr, a collection of stories originally published in Amazing in the early '30s, is in the same series of space operas about three scientists as Invaders From the Infinite, which I read in 2011 and thought boring, as I told the customers of Amazon.com.

I read Gender Genocide by Edmund Cooper back in 2015, and still own the edition advertised here.  (The cover on this one is kind of embarrassing.)

I read Barry N. Malzberg's The Falling Astronauts in this edition in 2011 and wrote about it on Amazon.  I love the cover.  I got mine, which suffered significant water damage before it came into my custody, at a church thrift store on Route 69 outside of Osceola, Iowa.

I own the advertised edition of George Zebrowski's The Omega Point, and read it and wrote about it back in 2015.  Terrific wraparound cover. 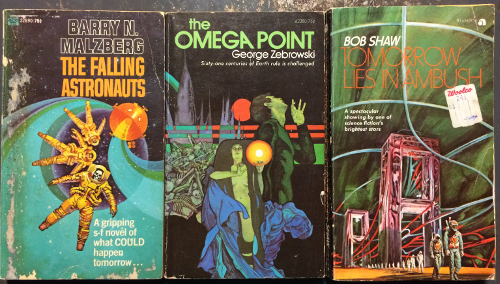 I own a pretty worn-out copy of the Ace edition of Bob Shaw's Tomorrow Lies in Ambush with a Woolco price sticker on the cover.  All you history-of-North-American-retail nerds (and I know you are out there) already know what I just learned five seconds ago on wikipedia, that Woolco was founded in Columbus, Ohio, the current location of MPorcius Fiction Log's HQ, in 1962 and went out of business in the US in 1983.  I like Shaw and am eating broccoli this week in hopes of living long enough to fit reading this collection of thirteen short stories into my schedule.

Veruchia by E. C. Tubb is the eighth installment in the 33-volume saga of Dumarest of Terra, the wandering space gladiator, and I read it in 2014 in a digital edition.  The cover on the edition advertised here in Ace Double 76380 is a nice "arty" one.

Warlord of the Air is one of Michael Moorcock's Oswald Bastable novels.  In my teens I was crazy about Elric and the whole Eternal Champion idea, and I amassed and read a huge collection of Moorcock novels, including Warlord of the Air.  One of Moorcock's recurring themes is the presentation of (at times metaphorical or alternate reality) Britain and/or USA as the villain, and another is the guy who goes native or turns against the people he was supporting in the first part of the story because they are imperialistic or whatever.  Both of these themes turn up in Warlord of the Air, and I believe all the Bastable novels; Bastable is an English adventurer who finds himself in an alternate reality in which China goes to war against the West and Bastable comes to sympathize with the Chinese.  More memorable (to me at least) was the second Bastable book, in which Africans build a tank the size of a battleship and conquer the world, the final scene being a battle between the African megatank and (I believe, memory may be failing me) an iteration of the U. S. Capitol building that bristles with heavy guns.  For whatever reason I never got to the third Bastable novel, in which, I am guessing, Bastable comes to sympathize with communist Russia.  (Moorcock fans better-read than I should feel free to set me straight in the comments.) 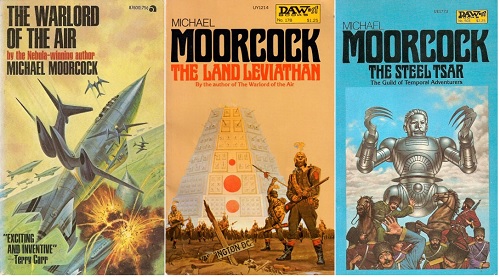 I am unenthusiastic about Ross Rocklynne, Ken Bulmer, and Mack Reynolds, having read some of their work and had very mixed feelings.  Ace's The Men and the Mirror is a collection of stories; I read the title story and wrote about it earlier this year.  Ken Bulmer writes violent adventure stories, but is not as skilled a storyteller as E. C. Tubb nor as unusual and interesting as Andrew J. Offutt; I wrote about Diamond Contessa in 2015 and Cycle of Nemesis in 2014.  Mack Reynolds, who under dubious conditions was for a while heralded as the most popular SF writer in the world, seems to write mostly about utopias and socialism in stories and novels that are short on character development or plot and long on trivia and philosophical speeches.  Do all three of these guys deserve another chance from me?  Of course they do, and, if I was going to live forever like a Venusian dictator, they would definitely get it.  Seeing as the grim reaper awaits me as it awaits us all, well, we'll see what happens.  Rocklynne is represented in my small collection of Ace Doubles, so maybe he will crop up in MPorcius Fiction Log's current series of posts on Ace Doubles.

I don't have enough direct experience of the work of Margaret St. Clair, Arthur K. Barnes, and John Rankine (a pseudonym of Douglas R. Mason) to have any opinion about them.  I find in the realm of 20th-century SF that there are always new frontiers to explore, and maybe someday I will be able to scribble something on these blank spaces on the map.
Posted by MPorcius at 9:12 AM