The Three Suns of Amara by William F. Temple

...Sherret reflected further that there was something disturbing about a Jackie's laugh....there was more irony than cruelty in it.  The laugher knew you were a fool, but knew that he was too.  He was laughing at the nature of things which made sport of him and of you. 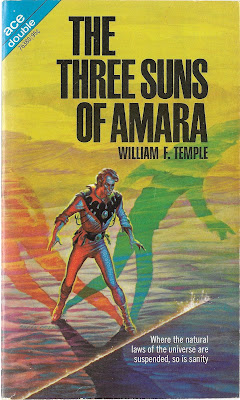 Even though people were getting killed all over the place by poison gas and shell splinters, William F. Temple's 1963 novel Battle on Venus, the half of  Ace Double 76380 which we read in our last episode, has a kind of light-hearted tone and includes little jokes here and there. Temple's bio on the first page of the book is also supposed to be funny.  I didn't think the jokes in Battle on Venus were counterproductively overdoing it (I often think comic relief undermines fiction, but Temple avoided this pitfall) but I was on my guard when I read the other half of Ace Double 76380, 1962's The Three Suns of Amara--this novel actually starts with a jocular, puzzling, "CAST OF CHARACTERS."

Whereas lots of SF is about scientists and engineers who seek knowledge and use their understanding of the laws of the universe to solve problems and accomplish great things, The Three Suns of Amara suggests the universe is a chaotic mystery that we'll never figure out.  Again and again the novel's hero and readers are confronted by complex systems which are totally inexplicable and bizarre phenomena that are absolutely incredible, among them astronomical phenomena, human neuroses and forms of government and society.

Star ship Endeavor is on Amara, a planet whose eccentric orbit around three equidistant suns astrophysicists cannot explain.  Crewman Alexander Sherret decides to leave the ship when Captain Maxton learns that Goffism is sweeping the Earth and decides to run his own vessel on Goffist lines.  Goffism, the brainchild of a "psychosociologist" whom Sherret considers "a nut," prescribes that political units be run as dictatorships, with each individual member of the unit being given a turn at wielding absolute power.  Sherret assumes such a system will lead to disaster and wants no part of it.  There is another human ship on Amara, Captain Bagshaw's Pegasus, 300 miles away at Na-Abiza, and Sherret sets out for it, on foot, a journey directly compared to that of Odysseus.  (Over the course of the novel Temple refers to Homer, to painter Diego Velasquez's Rokeby Venus, and, repeatedly, to Shakespeare.)

On the road, Sherret interacts with the many strange life forms native to Amara.  First up are specimens of the people Earthers have dubbed Paddies and Jackies; these figures set the tone of Sherret's odyssey.  Paddies are short and hairy, and their name is derived from a stereotype of Irish people which I am not quite familiar with, apparently a tendency of Irish people to speak cryptically or nonsensically.  (Maybe this is a reference to the paradoxes of Oscar Wilde, who isnamechecked later in the book?)


He greeted Sherret surlily, "Don't kill me, human, because if you do I shall kill you."

This kind of remark had earned the creature its sobriquet.

Jackies are tall and skinny, and "Jackie" is short for "jackass"--the Jackies are constantly laughing, maniacally, and like the Paddies speak in riddles.  The Paddy and Jackie provide Sherret incomprehensible advice, and then the Earthman proceeds onto his perilous journey, their warnings only making sense later, in context.

After he is subdued by Melas trees, which can only reproduce by reaching into a person's mind, Sherret is rescued by a member of the race known as the Petrans; like the Melas, Petrans have a psychic and parasitic nature.  A Petran can only survive as long as a member of a different race believes in it, and this Petran, Rosala, strives to keep Sherret from leaving, lest she fade away to nothing.  Among her means of convincing him to stay are her efforts to practice therapy on him--she is an artist and they collaboratively paint allegorical pictures of his neuroses as a means of expunging them.  (Remember how there was a lot of psychology in Battle on Venus, from Captain Freiburg's insecurities to Senilde's failure to achieve psychological adulthood?  Three Suns of Amara is also full of psychology.)  Then there's the fact that Rosala's appearance is determined by Sherret's preferences; he can tailor her looks to his exact specifications, so she looks like his dream girl.

Sherret falls in love, but his relationship with Rosala is tempestuous, claustrophobic, and plagued by jealousies, and he eventually leaves her to continue on his journey. He encounters more people from dysfunctional societies with psychological problems and more dangerous monsters who owe their existence largely to Sherret's own personality, as well as menacing and inexplicable natural phenomena, but finally makes it to Pegasus at the village of Na-Abiza.  He finds that Captain Bagshaw and his crew have fallen into decadence, having entered into an unstable and unsustainable exploitative relationship with yet another group of psychologically unbalanced natives, the inhabitants Na-Abiza.  The crew of the Pegasus is doomed, and they offer Sherret no way off Amara and no safe harbor.

Sherret heads back towards Rosala's place, and meets her on the way.  She has broken the laws of her people and abdicated many of her psychic powers, proving her sincere love for Sherret.  The lovers set out to reform the Petrans in hopes of founding the first healthy community on Amara.

Three Suns of Amara is more like a series of fantasy allegories of unhealthy individuals and societies than a "real" science fiction story in which the author speculates about the effects of novel conditions or extrapolates from real-life trends. Again and again Sherret confronts bewildering phenomena that are visually striking (like the oft-described light effects of the three suns and the glowing, slowly growing crack in the world, both of which Kelly Freas illustrates in his charming cover illustration) or make some metaphorical point, but when the Earthman asks an Amaran about them, he receives no explanation.  Instead of coming up with believable explanations for, say, Petran biology, Temple just has Rosala tell the Earthman that such things are secrets she cannot divulge.  The novel's point seems to have nothing to do with science, or to integrate a skepticism of science; perhaps Temple is trying to tell us that the universe is incomprehensible, but if we try to do the right thing and embrace love and friendship, maybe we can get by.  In making his point Temple presents the reader with lots of incredible stuff he refuses to explain, but I think the most outwardly ridiculous elements--Goffism, the Paddies and the Jackies--come at the beginning, and I don't think Temple ever slips across the line into absurdity or farce.

The Three Suns of Amara is more ambitious than Battle on Venus, but I don't think it is more entertaining.  It has a dream-like, unreal quality, which means it has little emotional impact, and since Temple tries to cram numerous topics into the small space afforded him (the novel takes up just 102 ages of text), he can only address them in a shallow way.

The Three Suns of Amara is acceptable, but not particularly remarkable or memorable. I certainly don't regret reading it and Battle on Venus, but they have not inspired me to actively seek out more of Temple's work.

Another Ace Double adventure coming up next time at MPorcius Fiction Log!
Posted by MPorcius at 8:07 PM

Email ThisBlogThis!Share to TwitterShare to FacebookShare to Pinterest
Labels: Temple