Gather in the Hall of the Planets by Barry N. Malzberg

"Something's happened, William; I can't enjoy a convention anymore. You see, I was visited by these three aliens who said that they were going to plant one of them in human disguise at this convention and if I couldn't detect his identity by the time it was over then they would destroy the planet.  So of course I'm a little distracted."

"That's interesting," Culp says.  "Of course the idea's been a little over-used." 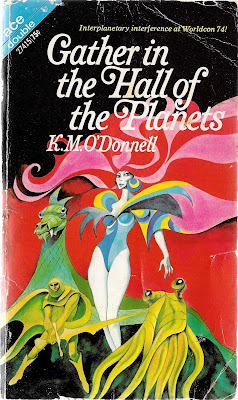 Our last episode discussed a Barry Malzberg novel about the SF community of New York City, 1970's Dwellers of the Deep.  That worked out pretty well, so I figured I might as well tackle 1971's Gather in the Hall of the Planets, another "meta" NYC-centric novel which paints an unflattering picture of rabid SF fans. Gather in the Hall of the Planets first appeared in Ace Double 27415.  The book is dedicated to Donald Wollheim, famed SF editor, who, Malzberg revealed in 2004, apparently provided the plot for the novel!

(In some ways, Kvass seems to be based on Malzberg's own life and career, and to express Malzberg's own frustrations.  I think Malzberg, however, has had a successful marriage and family life.)

One night, drunk and mired in the middle of a long stretch of writer's block, Kvass is visited by tentacled aliens.  They tell him that he has been selected to represent Earth for the purposes of taking a test.  At the upcoming 1974 world science fiction convention in New York City, one of Kvass's close associates will have been seized by the aliens and replaced with an alien in disguise.  If Kvass can spot the alien (he has to ritualistically say "unmask!" to indicate his discovery) Earth has passed the test.  If Kvass fingers the wrong person, the aliens will blow up the Earth.  This is the kind of thing education activists decry as a high stakes test! 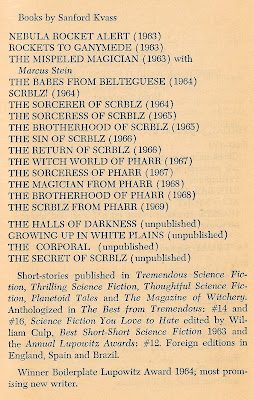 Most of the novel consists of funny scenes of Kvass staring into peoples' eyes or trying to have sex with them as a means of discerning whether they are human or alien, descriptions of wacky convention hi-jinks, and Malzberg's satirical takes on famous figures and events of SF history.  As in Dwellers of the Deep, we get caricatures of A. E. van Vogt and Sam Moskowitz, and thinly veiled retellings of the role of Dianetics in van Vogt's career and of the split between Moskowitz's SF fan group and leftist SF fans like Wollheim and Frederick Pohl. Stuart Wiseman, the shady seller of overpriced magazines, also reappears.  It was a little disappointing seeing Malzberg trot out such similar gags instead of amusing us with more caricatures of different SF figures and events.

In Malzberg's defense, there is an extended reference to John W. Campbell, Jr.'s "Who Goes There?", as well as a pair of editors, William Culp and Michael Foote, who are said to have been married to the same woman (at different times, we are assured) who, put on a panel together, without using the phrase, seem to be debating the "New Wave"; one argues that SF has to expand its horizons and focus on "what's closest to our hearts and minds," while the other insists SF is about science and follows particular conventions, and writing that does not follow those conventions ceases to be SF.

There is also a good chapter about the angst and disillusionment felt by writers of popular fiction (at least in Malzberg's conception; I hope at least some genre writers are happy with their careers): guilt at being paid for such a silly occupation; disbelief that anybody could possibly care about one's output; and late in his career, sadness that one has been unable, in the medium of popular fiction, to say anything he really wanted to say.  At various points in the novel Malzberg suggests that being a writer of popular fiction is like being a prostitute, and that writing is no less absurd than looking for a probably hallucinatory alien doppelganger.

In the final scene of the novel, after it is clear that Kvass's career is kaput and that the aliens (if they are in fact real) have lied to him, Kvass snatches up a mirror and says "unmask!", declaring that he himself is the alien.  Even though this revelation was foreshadowed, I am not sure it makes any sense in relation to the novel's plot (if the aliens are real), but I suppose it is a spoof of those classic SF stories by people like van Vogt, Alfred Bester and Robert Heinlein in which a guy, in the climax, is revealed to be multiple characters or his own ancestor or some such thing, due to time travel or some similar gimmick.  Also, it expresses the idea that Kvass is alienated not only from the world and his community (other people at the convention keep telling him that his published work is poor, or not as good as it used to be, or that they simply have never read it or even heard of Kvass) but from himself, that he is not the man he used to be and not the man he wanted to be.

Another fun read aimed directly at those familiar with the history of SF and its prominent figures, distinguished from Dwellers of the Deep by its focus on the plight of professional writers and editors who, like Malzberg himself, think perhaps they (and SF as a whole) could have achieved something more.