It's back to Ace Double 27415 and In the Pocket and Other S-F Stories, "A Grab-Bag of Science-Fiction Surprises" by Barry Malzberg published under his transparent pen name of K. M. O'Donnell.

"As Between Generations," in this same collection, was a four-page story about the sad reality of relationships between parents and children; "The New Rappacini" (all you English majors and Vincent Price fans know where Malzberg got the title) is a five-page tale about the sad truth of marriage!  How many of the things that spouses do that ostensibly are an expression of love, or reflective of love, are in fact done in the pursuit of selfishness, or mere playacting to obscure that selfishness from others and from the self? 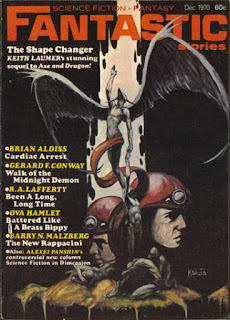 Glover comes home one day to find his wife has died in a freak accident, falling down some stairs.  He buys a "kit" with which he can bring her back to life.  As he follows the kit's instructions, he considers many hard truths about their marriage.  Will his wife appreciate being brought back to life? Maybe she prefers death to spending time with him!  Is he bringing her back to life because he loves her, or just because he is horny?  Could he be bringing her back to life simply to perpetuate the facade that he loves her, in an effort to prove to the world, to his wife and to himself that he is capable of love and not just a selfish jerk?  The kit provides the material needed to "improve" his wife, make her smarter, make her breasts larger, make her vagina tighter... if he makes these alterations, will it expose his selfishness?

Very good.  "The New Rappacini" first appeared in an issue of Fantastic full of work by famous names like Keith Laumer, Brian Aldiss  R. A. Lafferty, and Jeff Jones.  Run out and pick this one up!

Have I told you that one of my favorite Woody Woodpecker cartoons is about a character named "The Bat?"

"Bat" is a first-person narrative from a drug addict living in New York City.  As he tells it, for three years the Earth has been in contact with a diverse array of extra terrestrials, but, unlike in most SF stories in which contact with aliens leads to revolutionary change or heroic drama, like dreadful wars or humanity's elevation to a higher plane of consciousnesses, these aliens just come as tourists, barely interacting with us natives!  Like all New Yorkers, our dope fiend of a narrator finds tourists, including these aliens, very annoying!  "...after you've talked to them five minutes you know everything you could possibly want to know about them and despite the fact that they come from distant segments of the universe, they all sound pretty much the same."

As the story progresses, we learn that the arrival of the aliens has not wrought tremendous changes to human life, only exacerbated one of our worst tendencies.  Being visited by superior who ignore us has led to a sort of psychological malaise, and more and more people are turning to drugs.

The plot of the story is a standard Malzbergian one: the aliens chose the narrator at random to take a test to see if the Earth should be allowed to persist or should be destroyed.  As is so often the case with Malzberg, we readers can't be sure how much of all this extraterrestrial business is real, and how much is the protagonist's hallucinations.

Good.  I think "Bat" has only ever appeared here in In the Pocket and Other S-F Stories, and in that Italian translation, making it an essential purchase for Malzberg fans, fans of SF that "subverts the expectations of the genre," and fans of SF stories about New York City drug addicts. 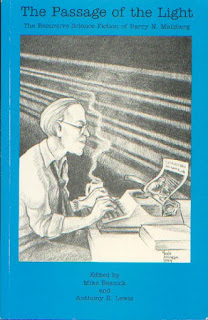 This is another of those "meta" SF stories about a guy in the SF biz, like "July 24, 1970," and it shows up in 1994's The Passage of the Light as well as here.  If you have a lot of money laying around and want to encourage the reprinting of old SF and strange experimental niche SF you should consider ordering The Passage of the Light from the good people at NESFA Press, which can be done for like 20 bucks.

A married-with-child 45-year-old SF writer named Constantine abandons SF to write a sex novel about a college professor who has sex with a female student who is trying to persuade him to change her grade.  (When I, your humble blogger, was considering grad school back in the '90s a guy told me I should definitely become a college professor because it opened up all kinds of possibilities to have sex with young women.  I've never been sure to what extent he was kidding.)  His wife and child present obstacles, perhaps insurmountable, to this shift in his career.

A funny but also tragic look at the life of the professional writer and family life in general. 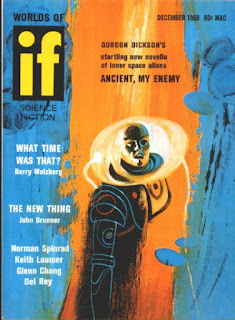 When I was quite young the first Choose Your Own Adventure books came out, and my brother and I spent a lot of time reading such titles as The Cave of Time and The Mystery of Chimney Rock.  When I was a little older came the Fighting Fantasy Gamebooks spearheaded by Games Workshop founders Ian Livingstone and Steve Jackson; my brother and I were so obsessed with these that when I went to London by myself in the '90s "buy British editions of Fighting Fantasy Gamebooks" was right there on the must-do list with "see the Elgin marbles," "see Burne-Jones' The Golden Stairs and Rossetti's Prosperine" and "visit Imperial War Museum."  The very pinnacle, of course, of this whole gamebook phenomena was Steve Jackson's genius four-book Sorcery! series with its disturbing and gorgeous illustrations by John Blanche which I never tire of admiring.

I bring up the gamebook phenomena because in "What Time Was That?" Malzberg employs the rarely seen second-person perspective, putting you the reader into the story!  Max Robin is an uneducated goofball living on the dole who sits in the public library poring over technical articles he doesn't understand, trying to figure out how to make a time machine!  (All of this brought to mind Karl Marx.)  When Max has finally built a time machine, the narrator (who has told us that making a working time machine is obviously impossible) goes to visit Max, bringing the reader along.  Max grabs the reader and forces "you" into the device to test it!  When Max throws the switch the reader disappears.  Then there is some business I didn't understand about how maybe the reader is Max and scores of Maxes come out of the machine and start a melee.

OK.  "What Time Was That?" first appeared in If; on the cover Barry's name appears above Norman Spinrad's and Keith Laumer's!  Malzberg sometimes complains that his work was not recognized by the public, but nobody can blame editors for that--as far as I can tell they went out of their way to put Malzberg's work before the eyes of the SF-reading public.

Though I am not indiscriminately against the 1960s (I love The Kinks and The Who, for example), the incessant self-indulgent romanticizing about the decade of Haight-Ashbury and Woodstock and all that by some people who lived through it can get on my nerves.  So I was a little wary about this story.

"A Soulsong to the Sad, Silly, Soaring Sixties" is, I think, about a guy who goes insane and has hallucinations of participating in or being present at various iconic episodes of violence during the 1960s, events like the JFK murder and the police riot at the Democratic Party Convention in Chicago.  Malzberg tries to give us a sense of the hallucinations in paragraphs that feel like a lot of opaque phrases jumbled together.  Half of the story's seven pages consist of these tedious and mysterious passages, and half the insane person's diary and letters to various people explaining his condition in vague terms. 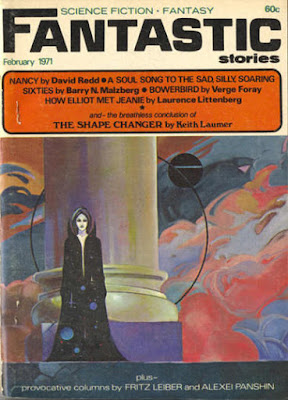 This is the kind of story that perhaps would move someone who already has deep emotional commitments to the events hinted at, but which, because it is so vague and unclear, has no effect on a person like myself born in 1971 who has no more emotional attachment to JFK, Malcolm X or Abbie Hoffman than to Franz Ferdinand, Peter Bartholomew or Publius Clodius Pulcher, and just sees them all as colorful characters from the past who were at the center of some turmoil that, at the time perhaps felt apocalyptic, but which ordinary people in 2017 can be forgiven for knowing little if anything about.

I'm calling this one a failure.  A story like "The New Rappacini" works because most people have been involved in some kind of sexual relationship, and a story like "A Question of Slant" works because it teaches those of us who are not professional writers of genre fiction some interesting things about being such a writer.  Only somebody already all wrapped up emotionally in 1960s unrest can really grok "A Soulsong to the Sad, Silly, Soaring Sixties," and Malzberg does nothing to teach the reader who didn't live through the '60s anything about the period.

"A Soulsong to the Sad, Silly, Soaring Sixties" appeared in an issue of Fantastic with a cover I am totally loving by Steve Harper. 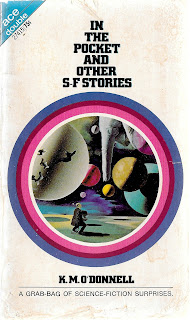 Here we have another story which, I think, only ever appeared here in In the Pocket and Other S-F Stories.  "Addendum" is a time travel story, and feels like a combination of Moore and Kuttner's brilliant Vintage Season and Ray Bradbury's famous "Sound of Thunder," with a Malzbergian twist.

"Addendum" is the text of a report about a disastrous time travel mission.  It seems that in the future, people will go back in time to observe tragedies for fun (this is what happens in Vintage Season.)  And it seems that somebody went insane (it would hardly be a Malzberg story if nobody went insane, amirite?) and escaped the expedition's invisible vehicle and did something to change history (this is what happens in "Sound of Thunder.")  The Malzbergian twist is that a clue indicates that the expedition went back in time to observe the JFK assassination.

Alright, another Ace Double, and another collection of Malzberg stories, behind us! In the Pocket and Other S-F Stories is a very good collection, a must for Malzberg fans, and a good collection for people curious about Malzberg who have yet to experience his unique body of work because so many of the stories are characteristic in their themes and ideas, and because so many are (in my opinion) more entertaining than his average.
Posted by MPorcius at 7:52 PM