Flipping through the science fiction anthologies I own, I found Chad Oliver's name popping up.  I'd never read anything by Oliver, so out of curiosity this weekend I read three of his stories from anthologies I purchased this year. 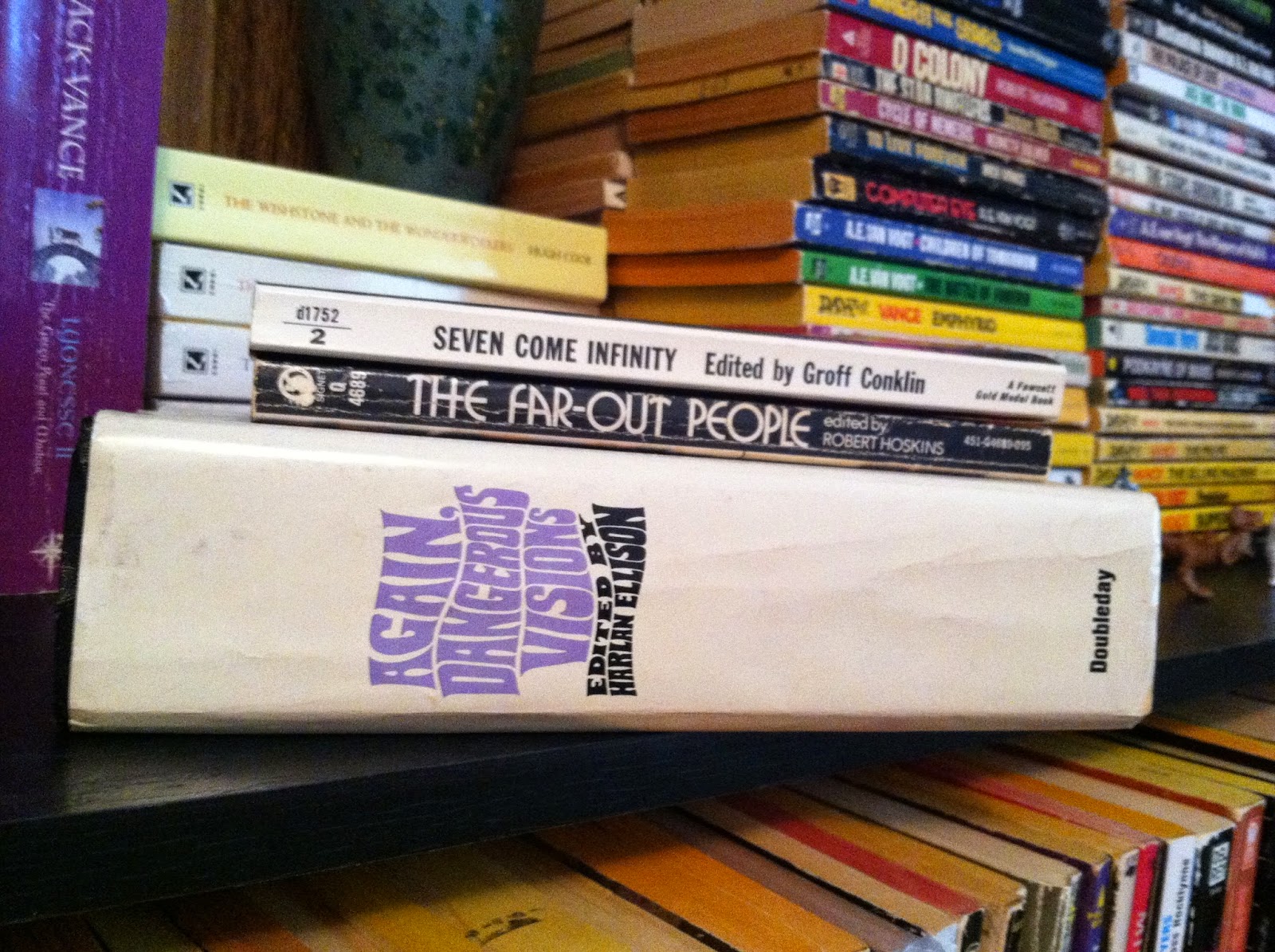 I read "Rite of Passage" in the 1966 collection Seven Come Infinity, edited by Groff Conklin.  The story first appeared in Astounding.

Martin Ashley is a veteran anthropologist in the year 2067.  The galaxy is full of planets with indigenous human civilizations, and Ashley is on the crew of a survey ship, travelling around, investigating them.  When a plague strikes the survey ship, killing fifty-one out of the fifty-four member crew, Ashley and the two other survivors are marooned on a planet where the people live in huts and live off the produce of small farms and by hunting with bows. 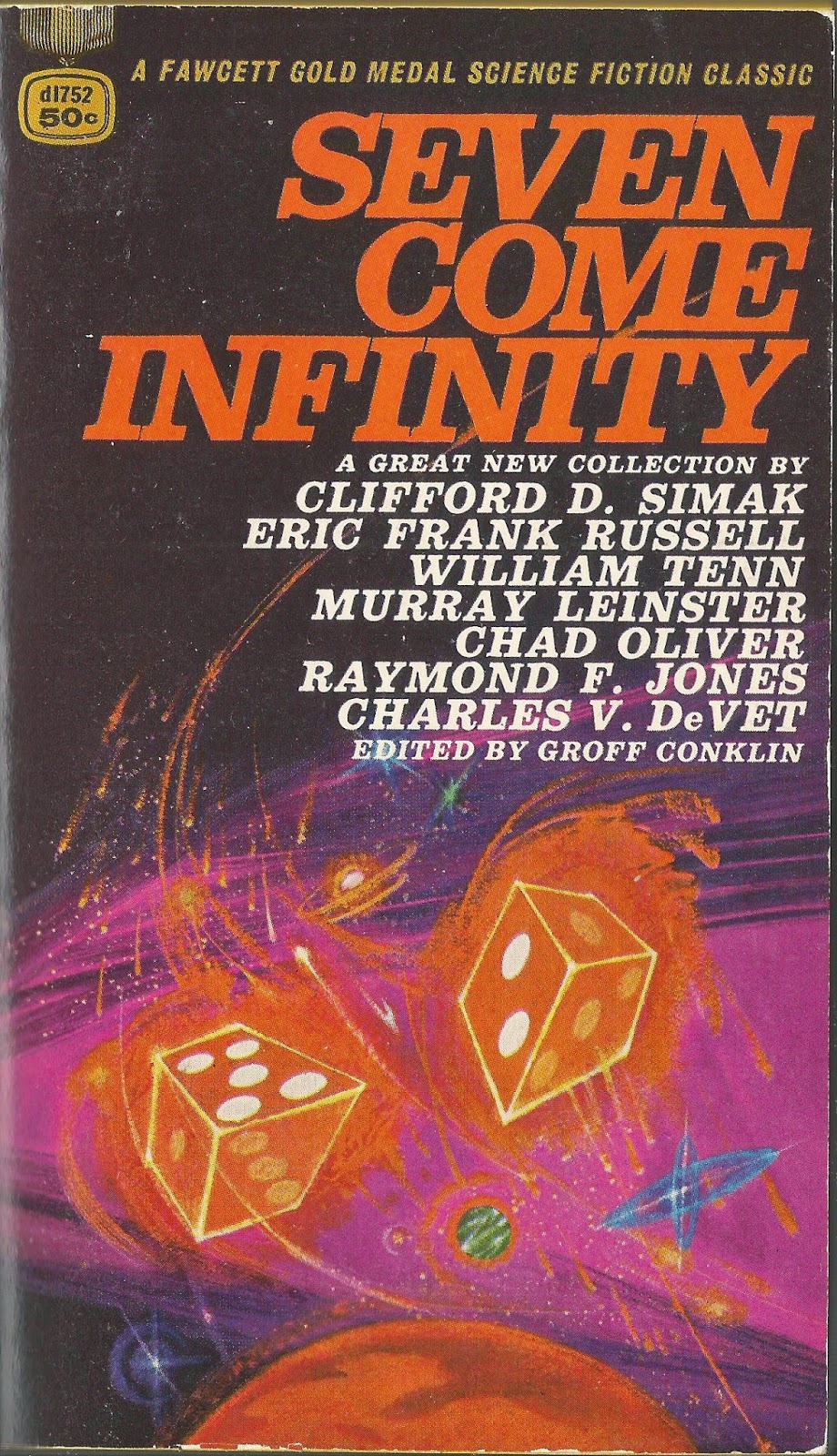 These natives, the Nern, seem primitive, but Ashley eventually figures out that they are in fact the most advanced society in the galaxy.  They could have a complex modern society, and once did, but they have decided to live the simple life instead, abandoning books, computers, electricity, the wheel, and all that jazz. Oliver, to my mind, with the Nern tries to have his cake and eat it, too.  The Nern crops are easy to cultivate, needing no fertilizer, insecticide, or weeding.  The Nern, by using psychosomatic techniques and herbs, have all the benefits of modern medicine without X-ray machines, pharmaceutical companies, scalpels or syringes.  They don't need any kind of police apparatus or defense establishment because they can just use hypnotism to make people behave.  (This story reminded me of Sturgeon's "Skills of Xanadu," which also depicts a utopian story that felt too perfect.)

The three Earthmen fall ill from the plague they brought from the ship, and one dies when he rejects the Nern psychosomatic treatment.  Ashley lives and decides to join the Nern.  The third Earthling returns to Earth, but the Nern have implanted in his brain a hypnotic suggestion that will somehow spread to the rest of the Earth population and make sure we all behave in the future.

I am not the audience for this story; for one thing, I never like utopian stories.  "Rite of Passage" depicts a utopia that to me sounds like an absolute drag.  I love books, oil paintings, skyscrapers, photographs, cathedrals, imported food, the whole experience of modern urban life, and I've never found that whole Rousseau noble savage bit at all attractive.  Oliver makes a feeble attempt to convince you that living in a hut and eating the same food every day with no books to read is awesome: "...when you ate a [Nern] meal you knew where it came from... who could be pressed for time, when it was all the same day, repeating itself forever?...the Nern had substituted philosophy and songs and dance for books...."

Besides finding the whole point of the story unconvincing, I think the story is too long (49 pages), and there is a lot of people just jawing away, blah blah blah, very little emotion or action or excitement.  The style is alright, so it wasn't a painful read, but it wasn't a profitable one, either.  Thumbs down, but more bemused than bitter. 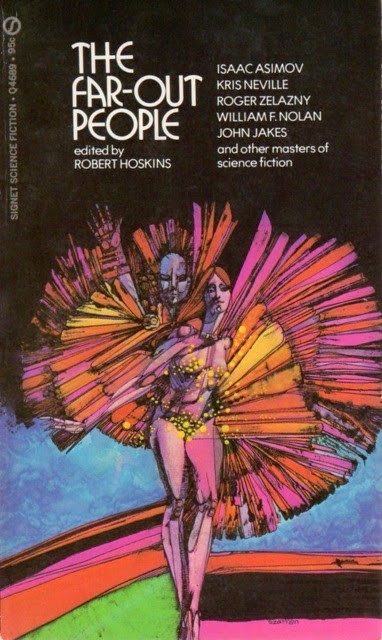 I read "North Wind" in the 1971 anthology edited by Robert Hoskins, The Far-Out People.  It was first published in The Magazine of Fantasy and Science Fiction.

Like "Rite of Passage" this story takes place in a universe in which many planets have indigenous human life, and as in "Rite of Passage" one character is a survey anthropologist.  But our main character is a United Nations official named Mevor.  Mevor's job is to assess all these human-inhabited planets that get discovered, based on the reports of the anthropologists, and then, working with the "Colonial Development Committee," help decide how much of each planet to seize for colonization by Earthlings.  Mevor is unpopular among the cognoscenti (his subordinates and The New York Times among them) because they think he is stealing the natives' land.

One of Mevor's anthropologists, Simpson, falsifies information about a planet in hopes of getting the planet ruled off limits to colonization; Simpson has become friendly with the natives, and wants to protect them from modern civilization.  But Mevor is smart; he figures out Simpson is lying and goes to the planet himself.  The point of the story turns out to be that Simpson is less moral than Mevor, because the anthropologist is choosing sides and playing favorites, while Mevor treats everybody, Earthman and ET alike, equally.  Mevor is also wiser than Simpson; lying and making biased assessments would be bad for the natives in the long run, because it would destroy the credibility of the UN and weaken the ability of the UN to limit the abuse the colonists inflict on the natives.  Mevor is a hero for taking a job which earns him public opprobrium and for trying to give everybody a fair shake.

"North Wind" is a better story than "Rite of Passage" because it is more concise and because it has at its center a character.  I wouldn't call it a good story, though.  Besides being a little boring, it would have been improved by Oliver including more characters and scenes to indicate that Mevor was moderating the colonists, and perhaps that colonization was necessary. No characters voicing the Earthling colonists' point of view appear "on screen," and Mevor just says or implies that he is protecting the natives from the colonists, and that colonization is inevitable; these things are not clearly demonstrated.  Of course, scenes like that might have made the entire story seem nonsensical--if Mevor is strenuously defending the natives, why don't his own staff and the reporters at the Times know it?--and I guess the fact that Mevor has the interests of the natives at heart is supposed to be a surprise to the reader.

An acceptable story, but I'm not enthusiastic about it.

"King of the Hill" appears in Harlan Ellison's anthology Again Dangerous Visions, sequel to what is probably the most famous SF anthology of all time, Dangerous Visions.  In his introduction to the story, Ellison says the "impossibly high quality level of his stories" renders Oliver "almost a legendary name."  Then Ellison goes on to brag about various fights and dangerous rescues he has been involved in; burning cars, giant Puerto Rican drunks, Greenwich Village street gangs, Ellison has braved them all.

The story: It is the second half of the 21st century.  Overpopulation has ruined the Earth; the seas and air are polluted, food shortages have resulted in pets being outlawed, etc.  Oliver lays it on pretty thick: mankind is "a monster" who has "raped a world until he could not live with it," the Earth is "so strangled by countless tons of human meat that land per capita was measured in square feet," that kind of thing.

Our main character is nonagenarian Sam Gregg, the richest man in the world.  He has a sexy and vapid young wife who believes in astrology and seances.  Under a force field dome he owns the last nature trail in the world.  He also owns the sole space station.  Sam loves animals, and so strives to save them (humans are beyond saving.)  Sam puts robots and animal sperm and ova (genetically modified for life out in Saturn's orbit) and some kind of air generating apparatus in a spaceship and sends it to Titan.  There, under a force field dome, raccoon and dogs are midwifed by the robots.  Thanks to space radiation, in a few dozen generations, after the human race is extinct, intelligent raccoon people are building a civilization on Titan. 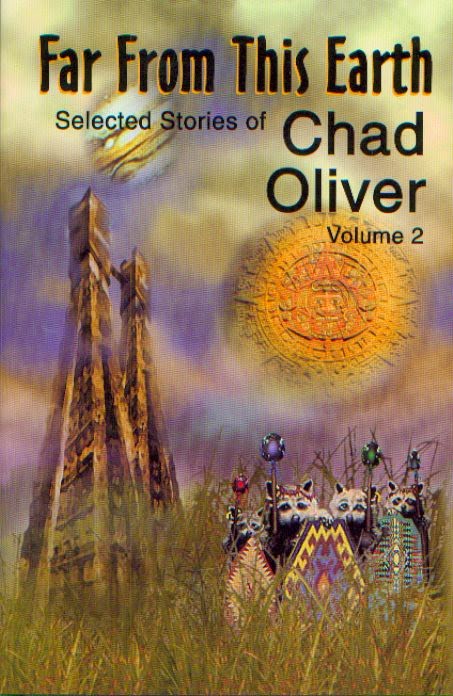 (Presumably these are the raccoon people who appear on the cover of the 2003 collection of Oliver stories, Far From this Earth.)

This is one of those snarky stories that directly addresses the reader sarcastically ("Don't like the ending?  A trifle stark?") and is full of lame colloquial jokes ("Ain't science wunnerful?")  It is also one of those stories that is more like a fable than a modern piece of fiction.  And it is one of those misanthropic sledgehammer polemic stories. These are all kinds of stories I don't find particularly congenial.  Still, "King of the Hill" is so wacky, so over the top, that it is amusing in a "so bad it is good" way, and it can also be seen as a sort of time capsule of 1972.  "King of the Hill" is also perhaps a good representative story of what Ellison was going for with the Dangerous Visions anthologies, stories that are supposed to shock the reader, address important topics, and/or use different literary techniques.  The story doesn't feel long, either-- the sentences are short and punchy, and the story is the right length.  So this one gets a passing grade, even if I appreciate it in a way different from that which Oliver intended.

There is (or was) a market for utopian stories and anti-pollution polemics, and stories demonstrating anthropological theories, but I'm not keen on such stories, so don't expect to see further discussion of Chad Oliver on this here blog any time soon.
Posted by MPorcius at 12:41 PM