As anybody reading this probably knows already, James Tiptree, Jr. is a pseudonym used by Alice Sheldon.  For ten years (1967-77) Sheldon published critically acclaimed science fiction stories under the Tiptree pen name, successfully hiding her true identity.  Tiptree is one of the famous SF authors I have never read, but that gap in my experience is closed today!

Charles Platt's profile of Sheldon in his 1983 book Dream Makers II makes her seem like a fascinating character who lead a privileged and heroic life: participation in safaris and scientific expeditions in Africa and India as a child, a successful career as a painter, work in the Pentagon analyzing aerial photographs in support of the U.S. Army Air Force in the Pacific War, work for the CIA during the early Cold War, then a stint as a behavioral psychologist.  In the profile she expresses the conventional lefty elite contempt for Dwight D. Eisenhower and Ronald Reagan, but, being born long before our current identity politics era, she isn't afraid to paint a picture of Africa as a place full of cannibals and witch doctors who saw her, a little blonde girl, as some kind of goddess, or to say stuff like "much as I loathe Roman Catholicism as an authoritarian religion, Islam is worse."

Let's hope Sheldon's stories are as interesting and exciting as her own character and life were.  As part of my project of reading every story in David Gerrold and Stephen Goldin's 1972 anthology Generation, I am reading the Tiptree stories included therein, "Through a Lass Darkly" and "Amberjack."  Also published in '72, the year of your humble blogger's first birthday, was Harlan Ellison's famous Again, Dangerous Visions, and I will be reading the Tiptree story included in that volume, "The Milk of Paradise," as well.  (Note that the Generation stories were purchased by Gerrold and Goldin in 1969, even though Generation wasn't published until 3 years later.) 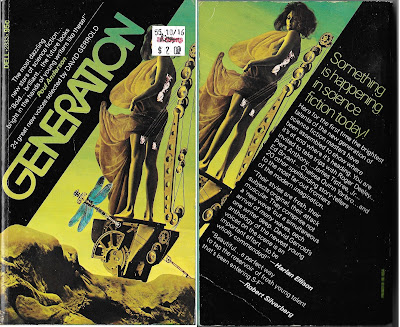 "Through a Lass Darkly"

In his intro in Generation to this story Gerrold praises Tiptree to the skies: "...if I had to pick one writer today as being the most all-around skilled architect of the short story as well as one of the freshest and most original craftsmen, I'd pick Tiptree.  No shit."

Amusingly enough, one of the two characters in "Through a Lass Darkly" is a man who writes an advice column under a female byline.  (In real life, libertarian journalist Nick Gillespie did this at Teen Machine magazine, ghostwriting an advice column for Alyssa Milano.)

The advice columnist is sitting in his office, banging away at the ol' typewriter, when a pretty girl teleports in.  She is from the year 2269, and speaks in a futuristic version of English which the columnist and we readers have to interperet as best we can. Deciphering her argot we learn that, in the 23rd century, sexual and social relations will be very different than they are today, with group marriages, and, apparently, government control over how many children a woman can give birth to.  When the girl learns that the columnist is a bachelor she is disgusted at his "perversion." (Interestingly, in the future there will still be a strong distinction between small town and big city values.)

In the same way that people in 1969 knew little about what went on in 1669, the girl from the future knows nothing of the typical concerns of a 1960s person, and when the columnist asks if there is nuclear war or race hatred in the 23rd century, she doesn't know what he is talking about.  Of course, her ignorance doesn't keep her from having an arrogant confidence that her society is far better and far more free than those of the past!

An entertaining and engaging story.

This one is just three pages.  As with "Through a Lass Darkly" there is a level of intentional obscurity here, with long convoluted sentences and challenging metaphors and the use of onomatopoeia.  I think I have an idea of what is going on, though. While "Through a Lass Darkly" was light-hearted and a little jokey, "Amberjack" is heavy.

A young couple is reluctant to really commit to each other, to admit that they love each other, because of bad relationships with their parents and siblings, who were nagging, neglectful, etc; neither of them has ever had a good role model of a healthy love relationship.  One hot night they are sleeping on the fire escape of their apartment, and the woman admits she is pregnant; neither of them expects to find marriage or parenthood a happy situation.  Somehow a fight breaks out, and the woman falls from the fire escape to her death.  Then the woman's sister appears, telling the man she has been looking for them and suggesting she will help the man escape prosecution for the death of his girlfriend, her own sister--it seems like she wants the man for herself.

The three characters' names may be significant.  The man is called "Amberjack" throughout the story, but we are told that he was called "Daniel" when he first met his girlfriend, "'Rue."  Daniel brings to mind the lion's den, while an amberjack is a type of fish (which I did not know until today); the use of two names suggests some kind of uneasiness about identity, or a desire to be a different person than he was when he was with 'Rue.  'Rue's name always has that apostrophe, perhaps hinting that her bad upbringing has left her a truncated or incomplete human being?  "'Rue" makes one think of the phrase "you will rue the day," and also kangaroos, I guess.  The sister (who looks almost identical to 'Rue) is named Pompey, like the general who, during the crises during the last years of the Roman Republic, was allied with Julius Caesar but then sided with Cato and the Republicans against Caesar.  (Of course, the ancient Pompey suffered defeat and a depressing death, while this Pompey seems to have succeeded in her aims.)

This is one of those stories which forces you to decide how much time and energy you want to spend trying to figure it out.  Every line seems to contain a clue or a red herring.  I'm leaving this story with the feeling I often get after reading a Gene Wolfe story, that I enjoyed it, but that I probably missed something. 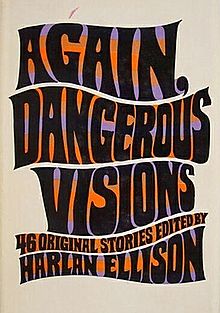 "The Milk of Paradise"

Like "Amberjack" this is an economical story in which every word counts and which has me straining my poor brain in an effort to puzzle out what is really happening.

The universe is inhabited by two races, the Humans and the moronic, inferior Crots.  But our protagonist Timor claims to have been raised by a third race, a race so beautiful and sophisticated that they make Humans look like Crots!  Timor was "rescued" from the planet of this super race when he was ten; he believes that a disease unwittingly brought by his Human rescuers wiped out the super race.

Timor has just finished training as a space scout and is the "newboy" at the space station.  Human society in the setting Tiptree presents us is very sexually permissive, and very casual about sex, and both women and men make advances on Timor. Timor is receptive to these advances, but his memories of the super race leave him unaroused by his fellow Humans--to him, Humans, even his own body, are disgusting! Timor even wears a grey outfit to cover his hideous "pink" skin--the beings of the super race have grey skin.

Timor's first assignment is to accompany an experienced scout, a black man, on a space mission.  Foreshadowing what is to come, the black scout, Santiago, jestingly calls Timor a Crot, and, because his skin is dark, Timor is able to experience some kind of sexual feeling for Santiago.  Santiago wants to explore the planet of the super race, and uses drugs and other invasive techniques to get the data out of Timor's brain. When the two scouts get to the planet, which Timor recalls as a sort of paradise of shimmering towers, Santiago laughs to find the natives to be grotesque little monsters ("grey rotten lumps") with colossal genitals who live in wretched mud huts.  "SUBCROTS!" he guffaws.  But Timor jumps into the mud with them, starts having sex with them.

It seems like Timor had living within him one of these aliens, or its consciousness, or something like that.  Anyway, he is happy to return to his true people, who, it is suggested, are going to "totally recondition" him so he can live as an equal among them.  (As with "Amberjack," I feel like I "got" almost the whole story but was confused by the last few paras; Pompey's arrival is confusing in that earlier story and in "The Milk of Paradise" I am puzzled over Timor's precise relationship with the grey lumps.)

I guess you can say this story is about how beauty is in the eye of the beholder and different cultures have different customs and so forth (a theme also evident in "Through a Lass Darkly.")  Someone like Sheldon, a wealthy Westerner who lived among Africans and Indians as a child, would no doubt be very aware of the vast diversity in values and mores across communities.  The story is also about race, and about identity, and about how such things are potentially fluid and open to interpretation; we learn immediately in this story that the protagonist has two names (just as we did with the protagonists of "Through A Lass Darkly" and "Amberjack") and as the story progresses people call Timor a Human, a Crot, and then (indirectly perhaps) a Subcrot.

These stories are all good--they are certainly better than most of the stories in Generation--and they have many of the attributes I admire in stories, like economy and a focus on human feeling and human relationships.  Significantly, they are all about people who have two names, two identities, like Sheldon, who, masquerading as Tiptree, did herself.  Perhaps we should consider to what extent each of the three characters chooses to take on a second name and identity, and to what extent a second identity is thrust upon them by others, and compare this to what extent Sheldon herself voluntarily chose to write under an obscuring pseudonym and to what extent she felt societal pressure to do so.

It is good to have gained a little familiarity with an important SF author, and it is nice to find that there is something to all that hype.  I will certainly read more of Tiptree's work in the future.
Posted by MPorcius at 10:18 PM