It's been a while since we read anything by E. C. Tubb, the scribe who recorded the many adventures of space gladiator of the far future Earl Dumarest.  Instead of cracking open one of my many unread Dumarest volumes, let's check out three short stories by Tubb which I found in magazines and anthologies from the MPorcius library.

"The Ming Vase" appears in numerous collections of Tubb stories, including two in which it is the title story, as well as the ninth of Judith Merril's famous Year's Best anthologies.  I guess this is one of Tubb's more critically acclaimed productions.  I read it where it first appeared, in my copy of the May 1963 issue of Analog.  (I recently read the Norman Spinrad story from that issue.) 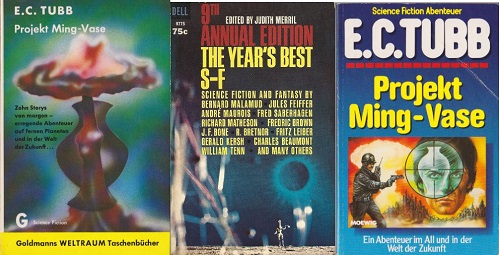 It is the Cold War!  One of America's advantages over the Goddamned commies is our superior psychic program!  Unfortunately, one of our best psykers, Klieger, has gone AWOL from the psychic project's HQ at Cartwright House.  CIA operative Don Gregson (wait, is he supposed to be operating domestically?) is on the case, following Klieger's trail across the USA as he does things like steal valuable Chinese vases from tony antique stores.  But how can Don catch a man who can predict the future?  And why did Klieger, after obediently residing in the fortress of Cartwright House for a decade, suddenly make a break for it?

This is a solid story with themes we've seen a bunch of times before (in our struggle with the Reds are we coming to resemble them?  Is the future determined or can it be altered by our actions?) and a decent "think-outside-the-box" ending.  In his interview with Charles Platt in 1980's Dream Makers Tubb tells the world he is a fan of Robert Heinlein's pre-Stranger in a Strange Land work (he hated Stranger, saying RAH had "done himself a tremendous disservice" in producing that and later books), so I was sort of primed to see similarities in "The Ming Vase" to Henlein's Cold War psyker story "Project Nightmare" (1953) and to "--We Also Walk Dogs" (1941), which also has a beautiful Ming ceramic as a major plot element--maybe those earlier stories were an influence on Tubb. 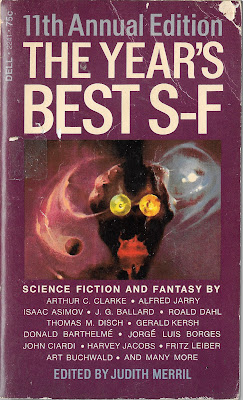 In the interview in Dream Makers Platt portrays Tubb, and Tubb presents himself, as a "hack" who resides in the "skid row of the science-fiction ghetto," the "action and adventure" sub genre, and who is at a distance from, and perhaps even has some contempt for, "serious" or "ambitious" "literature."  So I think it is fun to see Tubb in such venues as Judith Merril's 11th Annual Edition: The Year's Best S-F along with such mainstream literary figures as John Ciardi (the translator of the version of Dante's Comedy which I read in high school and in college) and Jorge Luis Borges, as well as those critically acclaimed New Age pioneers J. G. Ballard, R. A. Lafferty and Thomas Disch.  It is in my copy of 11th Annual Edition: The Year's Best S-F that I read "J is for Jeanne;" the story first appeared in Michael Moorcock's New Worlds.

"J is for Jeanne" is not the kind of action and adventure story that we associate with Tubb and his fellows in their particular part of the SF ghetto.  Instead it is a lame gimmick story.  We are presented with an odd narrative in which, it appears, a woman is relating her recurring nightmare to a series of analysts.  As revealed at the end, and as the reader perhaps has predicted from various clues, Jeanne is not a woman at all but a computer, and the interactions between Jeanne and the engineers we have witnessed are just allegories or fantasies or indications tghat the computer has developed a (insane) personality.

In the interview with Platt, Tubb talks about throwing together brief stories to fill space when he, as editor of a short-lived magazine, needed material and the only stuff getting submitted was "rubbish."  This feels like a story that was thrown together in such a fashion.  Not good. 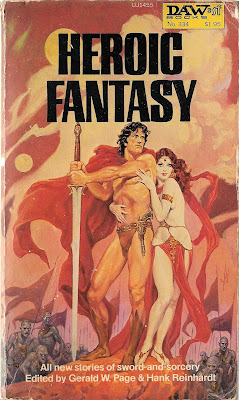 I purchased my heavily foxed and water damaged copy of Heroic Fantasy, edited by Gerald W. Page and Hank Reinhardt and published in 1979, at a flea market in South Carolina last year.  I kind of bought it just so I would have something to show for having dragged my wife and in laws to a hideous parking lot where people who smelled like cigarettes were selling rusty old tools, prehistoric videotapes, and boxes of expired pasta and breakfast cereal.  But now, months later, I am warming up to this volume which I originally thought of as a mere consolation prize.

In the intro to "Blood in the Mist" the editors compare Tubb's ability and volume of output to that of Henry Kuttner, Robert Silverberg and Edmond Hamilton, but, annoyingly, spell Hamilton's name incorrectly.  They also tell us it is the third story by Tubb about the hero Malkar; Page and Reinhardt don't give us the titles of the first two Malakar capers, but I'm guessing they are "Death God's Doom" and "Sword in the Snow," both from 1973.  It seems that in 1999 the Malkar stories were expanded into two novels (Death God's Doom and The Sleeping City), or maybe these novels are additions to the Malkar saga.

"Blood in the Mist" is one of those stories in which a grizzled mercenary (that's Malakar) meets an ancient merchant who seeks immortality and a gorgeous veiled lady in a smoky inn and accompanies them on their perilous journey through a snowy waste where they face treachery and monster attacks and the merchant resorts to calling upon the aid of eldritch demons.  I like these sorts of stories, and Tubb does a good job with the pacing, plotting, tone and the descriptions of the settings, creatures and fights.  Worth the attention of sword and sorcery fans; I'd be happy to read more Malakar stories.

"J is for Jeanne" is just bad, but "The Ming Vase" and "Blood in the Mist" are entertaining stories and good examples of their respective categories.  I also recommend that SF fans read the Tubb profile in Dream Makers; it has some laugh out loud moments and provides a memorably cynical and iconoclastic perspective from within (maybe just barely within) the world of SF publishing.
Posted by MPorcius at 4:26 PM