In our last episode I read James Tiptree, Jr.'s "Milk of Paradise" from my copy of Harlan Ellison's 1972 anthology Again, Dangerous Visions.  I noticed a story in the volume by Ross Rocklynne, a writer I'd not yet read anything by, and decided to give him a whirl.  A quick look through my bookshelves and online yielded three additional stories by Rocklynne to serve as my introduction to his oeuvre.

"Escape Through Space" was published in Amazing Stories; like I did, you can read it for free at the SFFaudio PDF page, which archives a scan of the original magazine's pages, including an illustration and a brief autobiography of Ohio-native Rocklynne.

This is a brief and sciency tale, but it also has political content, exhibiting the old level-headed American attitude that monarchy is stupid and socialism is evil.  Mankind has colonized the solar system, and such is man's hubris that the first pioneers on each planet and moon set themselves up as kings and queens!  As time has gone by, though, these monarchies have been getting overthrown and replaced with republics.  The latest revolution has been on Mars, where the revolutionaries are socialists and have killed all the aristocrats and royals with one exception, the Princess Helen.

American Larry Sharon is a young man of business, the youngest buyer at an import-export firm.  He is sent by his boss to the new Martian republic to negotiate a deal for some "tritonite."  On Mars, where Sharon witnesses signs that the socialists have been committing atrocities, he meets a high level official, who offers him a special job: ferrying the Princess Helen to Earth!  The revolutionaries can't just kill her in cold blood for fear of causing an interplanetary diplomatic outcry, but of course having her hanging around just encourages counter revolutionaries, so she has got to go.

Sharon doesn't trust the commies, especially when they stipulate that he not fly his own ship back to Earth but a clunky old rocket--they say it will be less likely to attract notice from bitter extremists eager to murder the Princess!  Of course, the new Martian government is giving him a slow ship so they can catch up to him and blow him and the Princess away far from any witnesses in the black void between the planets.

But Sharon has an ace up his sleeve.  He steals a march on the pursuing Reds by flying very close to the sun, within the "Boiling Zone" that, in normal circumstances, would destroy a ship.  He pulls this off by hitching a ride on a passing comet, using it as a parasol against the sun's rays!  Sharon gets to Earth with the cash money paid to him by the Martian bolshies, and the icing on the cake is that the gorgeous Princess has fallen in love with him--after a lifetime spent among effete aristos and diabolical commies, how could she fail to fall in love with an honest-to-goodness blue-eyed Irish-American hunk?  Another triumph for democracy! 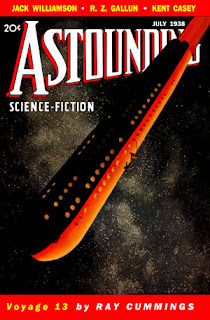 This story was first published in Astounding; I read it in my copy of Isaac Asimov's Before the Golden Age--it is the last story in that anthology. "The Men and the Mirror" is the third of Rocklynne's series of three stories about Lieutenant John Colbie of the Interplanetary Police Force and his pursuit across the solar system of a clever criminal, Edward Deverel.  In each story the 23rd-century gumshoe finds himself in what Asimov calls a "dilemma involving the laws of physics," and Asimov assures us that this tale is the best of them.

Using a disguise, Deverel has escaped the Terran base on Jupiter and Colbie pursues him to a rogue planet that has entered the solar system near the orbit of Neptune (these old stories are full of rogue stars and planets wandering into our precious solar system; we need to build a wall or something.)  On the surface of this interloping heavenly body is a huge circular mirror, like 3,500 miles in circumference, with an albedo approaching 1!  No doubt this was built by a vanished race far in advance of our own, a race of people determined to put our domestic mirror industry out of business!  The Terran Federation of Glaziers is sure to demand protective tariffs after it hears about this!

Deverel, though a pirate and a thief, fucking loves science as much as the next guy, so Colbie knows to search for him near the mysterious mirror, an engineering feat unique in the experience of humankind.  When he catches up to the pirate the two become friends (!) and decide to examine the mirror together.  They accidentally fall onto the frictionless concave surface of the alien mirror, and for 14 (fourteen!) pages slide back and forth within the bowl, trying to figure out how to get out!  Then comes the explanation of how they escaped, with sentences like this: "At the Earth's pole the plane of vibration of a pendulum turns around once every twenty-four hours, in a direction opposite to that at which the Earth rotates." 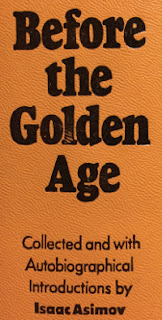 (I love to go to science museums to look at the dinosaurs, but I've never been able to really grok the pendulums they often have at these museums that, I guess, prove that the Earth rotates or something.)

Because they are now friends, Colbie lets Deverel get away, which gives me a chance to fling out one of my favorite public policy cliches: "mercy to the guilty is cruelty to the innocent."

"The Men and the Mirror" is an extreme example of the classic science fiction story which is about science and which shows the protagonist resolving the plot by using his knowledge of science and his ability to do complicated math (even without paper or slide rule, in this case).  I have to say that I am considering this story more a curious artifact than an entertaining--much less compelling--piece of fiction.

Here's another story I read at the SFFaudio PDF page, in a facsimile of its original appearance in the pages of Planet Stories.

Bob Parker and Quentin Zuyler are in the business of delivering asteroids to the estates of wealthy Earthlings for use as colossal lawn ornaments.  They have been hired to bring back a particular asteroid, but when they find it they face a problem: It is already in the hands of a beautiful young woman spacefarer, Starre Lowenthal, a rich girl with a spaceship shaped like a dumbbell. This problem is solved when a rival asteroid hauling firm attacks them, leaving all three of them for dead and seizing the valuable asteroid for themselves. 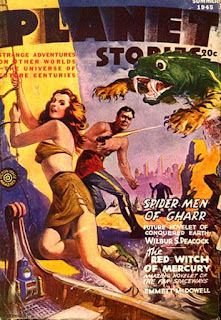 Starre has the presence of mind necessary to save them from death in the utterly cold darkness of space, and then Bob uses his knowledge of science to get their asteroid back.  It is illegal for asteroid hauling ships to mount heavy weapons, but Bob has Quentin attach Starre's ship to their hauler with a chain so the dumbbell-shaped vessel can be propelled and retrieved like a yo-yo.  Our heroes smash the rival firm's ship with the yo-yo and retrieve the asteroid.

An equally contrived bit of scientific shenanigans overcomes the objections of Starre's family to Bob and Starre getting hitched.

Like that of "Escape Through Space," the plot of "Cosmic Yo-Yo" relies on some pretty unlikely coincidences to work, but feels even more contrived and gimmicky. Merely acceptable.

Finally we get to the story from Again, Dangerous Visions.  In his intro, Ellison laments the feud between the "old and new waves," which he thinks is ridiculous. One of the problems caused by this nonsensical dispute is that it has discouraged some older writers from producing new work; Ellison suggests these skittish scribblers look upon Rocklynne as an encouraging example of a writer from SF's formative years who is up to the task of producing valuable new work in the post-New Wave environment.

I found "Ching-Witch" difficult to get into; it feels long and tedious, listless and quite dated, and my eyes kept glazing over as I read it.  It is, I guess, a sort of sarcastic homage or gentle satire of youth culture and those SF stories that contrast a utopia with our crummy and violent Earth society--in his afterword Rocklynne informs us that the story was inspired by a ten-day visit to Haight-Ashbury in 1966. 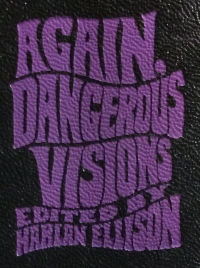 For over a century, the war torn Earth has prevented travel and communication with the human colony on Zephyrus, where everybody is noble and peaceful.  Captain Ratch Chug, a product of genetic engineering (he's 80% human and 20% feline) realizes the wars on Earth are about to blow up the planet, and escapes just in time, to Zephyrus.  He finds himself worshipped by the teenagers there, and teaches them Earth dances and Earth slang.  After a few years the Zephyruans realize Earth has been destroyed and Chug has been lying to them, and they reveal their true nature, which is almost as hateful and violent as that of Earthlings.  Chug has to move to yet another planet to avoid being lynched.

These stories are quite characteristic of the type or sub-genres of SF they represent (the hard SF adventure in which the hero uses his engineering and science knowledge to overcome danger and get the girl; the science puzzle story; and the jocular New Wave story situated within the youth culture), but they are far from the most entertaining or most well-crafted specimens of those sub-genres.  They aren't well-paced or well-plotted and they lack human feeling or engaging characters.

I own the Ace Double which includes Rocklynne's collection The Sun Destroyers, but, even though Ray Bradbury and Harlan Ellison have praised its stories, my experience reading these four pieces today has not inspired much enthusiasm for cracking it open.
Posted by MPorcius at 7:52 PM