The squat beastly leader took his boots and strutted in them.  Allayth hoped those fine equhyde boots raised incredible bunions on the feet of the incredibly ugly creature.  His name was Abdur and should have been Igor.  He appeared to be the result of a bioengineering experiment gone wrong.

Maybe the whole bloody planet is. 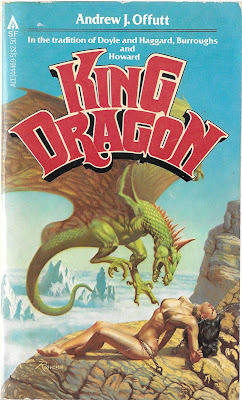 After Saddam Hussein was overthrown, among the treasures uncovered in one of his properties was the original canvas of Rowena Morrill's cover for Andrew J. Offutt's 1980 novel, King Dragon. Embarrassing for Morrill, no doubt, but she has some famous fans who are not quite so reprehensible as the Butcher of Baghdad, including Theodore Sturgeon, who wrote a gushing article about Morrill in 1983 for the September issue of Heavy Metal.  Ted tells us that, while he is a skilled car mechanic and chef, he can't draw at all, so "...I stand awestruck before the likes of Rowena Morrill."  Sturgeon specifically mentions Morrill's covers for the 1980 edition of his novel The Dreaming Jewels and his 1979 collection The Stars Are the Styx, for which she reimagined Sturgeon himself as a body-sculpted incarnation of Charon.

The 1980 Ace paperback of Offutt's King Dragon offers the discerning admirer of hot babes and reptilian beasts not only the apple of Saddam's eye on its cover, but dozens of interior illustrations by Esteban Maroto, the Spanish comic book artist.  (SF and fantasy blogger tarbandu is a big fan of Maroto.)  Most depict some kind of monster or a scantily clad woman (or both!), and while they may share the subject matter of the cover painting, they exhibit much more emotion and movement than Morrill's curiously static and flat illustration.  I like them.

As the text on the front and back covers indicates, King Dragon is a riff on such novels as Arthur Conan Doyle's Lost World, and Edgar Rice Burroughs' At the Earth's Core and The Land That Time Forgot, stories about places in the world where scientists and adventurers can go study and fight with dinosaurs and cavemen.  As a kid I loved nothing more than the idea of fighting dinosaurs, and I still find those Doug McClure movies like At the Earth's Core (1976) and The Land That Time Forgot (1975) irresistibly charming, and my favorite film continues to be King Kong (1933), so I was definitely interested in King Dragon.  Besides, I have been interested in Offutt's curious career for a while. Let's see what King Dragon is all about.

It is the far future!  A grad student, Jimajin Allayth, is trying to decide what to write his dissertation on; is there anything new in the universe to study? Then a transmission is picked up that can make his academic career, a transmission from a distant star system, a transmission a thousand years old!  The transmission indicates that, a thousand years ago, the starship Hajar L'Illah, commanded by leading biochemist al-Bah'ram, travelled to that system laden with stocks of fetuses and DNA from Earth, intent on realizing al-Bah'ram's dream of terraforming the barren planet of Jauhar al-Ajr and turning into a kind of laboratory of evolution.  Allayth and Cicada Lurie, a female grad student, are provided a starship and they (and an arrogant diplomat who dies in a spacesuit accident almost immediately) journey to Jauhar al-Ajr to study the society that has evolved over the last ten centuries on the Hajar L'Illah as it has orbited Jauhar al-Ajr.

The prominence in King Dragon of Arabs and Islam is one of the first things the reader notices about the book; Offutt has an interest in Arabic and Islamic culture evident here and in his other work (he wrote a series of erotic novels set during the Crusades, for example.) Allayth is an Arab, as were all the crew of the Hajar L'Illah and thus all the inhabitants of Jauhar al-Ajr, and we are told that Arab civilization became the world hegemon in the 21st century. There are plenty of SF novels about a world in which socialists or ad agencies or feminists or insurance companies or aliens take over, so a "what if Muslims take over?" novel is a good idea but Offutt, wedded as he is to the idea of writing a novel full of sex, doesn't seriously take on this project (apparently Michel Houellebecq has recently done so.)  The Islam of Offutt's future is tolerant of gender equality and sexually permissive, so Allayth and Lurie act like everybody does in a typical 1970s or '80s SF novel, having premarital sex, discussing their erotic fantasies and the advantages of nudity, citing Freud, and so forth.  The only difference is that people and places have Arabic names instead of European or Asian ones.

Allayth and Lurie find the Saudi biochemist's vessel is still in orbit around Jauhar al-Ajr, but it is critically damaged and deserted, filled with evidence of violence.  After exploring the ship and collecting journals and other documents that record the thousand year history of the terraforming effort, they descend to the man-made rainforests of the planet, to face the man-made dinosaurs, giant bears, pterosaurs, et al.

There are three main plot threads to King Dragon.  We've got Allayth's adventure (Lurie gets killed by a cave bear soon after their arrival on the planet's surface), we've got the history of al-Bah'ram and his terraforming project (related to us partly via journal entries and other primary materials) and we've got the saga of the beautiful Joharah, inhabitant of the stone age village of Kwait.  In order to escape marriage to Raafar, a disfigured man (she had agreed to marry him before a giant alligator tore off half his face and then tried to renege after seeing what an ugly mess he was post-gator), she fled Kwait for the jungle and was promptly captured by ape people, people uglier even than a post-crocodilian Raafar! 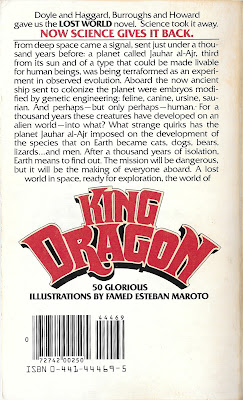 When Allayth is captured by the same band of beast men his story joins Joharah's. They escape the beast men, fight numerous creatures, battle Raafar, and finally learn the truth about al-Bah'ram and King Dragon.  The scientist made himself immortal nearly a millenia ago, but advancing age rendered him insane.  He conceives of himself as Allah's right hand man and embraces an old-fashioned view of Islam which sees women as second-class citizens; nine hundred years ago some of the crew rose up in rebellion against his tyranny, and after crushing the revolt al-Bah'ram moved operations to the planet surface, where "his" people have lived as primitives ever since.  Al-Bah'ram lives in an isolated fortress, never seen by the people and considered divine.  He observes his flock and communicates with them at rare intervals via King Dragon, a genetically engineered and mechanically enhanced pterosaur he controls via a "exoskeletal control-feedback suit."  Over the centuries the mad scientist has striven to lead his people to genetic perfection--he will sometimes issue commands about who should mate with whom, for example.  The people of Jauhar al-Ajr obey King Dragon's telepathic commands unquestioningly, and Allayth, like John Carter before him, is determined to get the people he finds himself among to abandon their bogus religion: Step No. 1 is killing King Dragon!

The plot of King Dragon is actually good, but Offutt's style, that of an ambitious show off, undermines it.  Offutt is long-winded, he goes off on tangents meant to showcase his erudition (e.g., there are lots of etymological digressions) and employs some rococo literary techniques--all this slows down what could be a fast and thrilling narrative. Offutt tries to show Allayth and Joharah and al-Bah'ram's emotions and states of mind, and their evolution as people as they face hardships and grow to meet the challenges that confront them (or, in the case of al-Bah'ram, crack up), which is a great idea, but his writing is repetitive, conveying the same information again and again and using the same words and phrases again and again in what I guess is an effort to be poetic or to reflect the obsessive thoughts of a mind under the influence of stress or senility or psychedelic mushrooms (we have to endure lengthy dream sequences after Allayth eats some shrooms, and this happens to him twice, for a total of eight pages of hallucinations.)

Here is an example of some of the issues I am talking about, page 143, a scene which is actually pretty cool, the flight of King Dragon:

Some of the writing is just bad; these lines, for example, should have been revised before publication:


Reasons were cited for arming the three people aboard the little jumpship Cygnet.  The decision, however, was not to do.

Now comes the part of the blog post in which I tell you that, despite my hundreds of complaints about King Dragon, I still enjoyed it.  The fight scenes are good, and I like the ideas behind the book: an Islamic future, an immortal mad scientist, dinosaurs and other prehistoric and genetically engineered monsters.  I also admire Offutt's ambition, and his effort to present to the reader characters with personality who evolve. However, I wouldn't recommend King Dragon to anyone who isn't already very interested in Offutt's or Maroto's body of work and/or Lost World stories, unless maybe you are writing a dissertation on portrayals of Muslims in speculative fiction.