"Johnny," she whispered.  "Johnny, you shouldn't have come back!"

We all had a good time back in November when, with Edmond Hamilton, we joined space naval officers, scientists and politicians (?) in the fight against aliens who sought to throw Earth into the Sun or blow up a super nebula and kill every person in the galaxy or commit sundry other genocidal astronomical atrocities. Those stories from the 1920s were reprinted by Ace in 1965 in the volume Crashing Suns, under the direction of the great Donald Wolheim.  But Ace wasn't the only publisher to join forces with World Wrecker Hamilton during the Swinging Sixties.  In 1966 Belmont Tower, whom we have to thank for my beloved Novelets of Science Fiction, Frank Belknap Long's It Was the Day of the Robot, and Harlan Ellison's From the Land of Fear, put out a brand new space adventure by Hamilton, Doomstar.  I own the 1979 reprint--let's check it out!

Our story begins in a nightclub in the Manhattan of the distant future where our hero, Johnny Kettrick, is watching alien dancing girls and ignoring his Earthling date!  (His heart isn't on boring old Earth, but out among the stars of the Hyades Cluster!) Unexpectedly, government agents pick Kettrick up and drive him out to Long Island (I hope Hamilton means the Hamptons!) for a meeting with some of the biggest wigs in the galaxy!  Scientists have reason to believe somebody in the Hyades has developed a weapon that can cause a star to emit catastrophically dangerous gamma radiation, radiation powerful enough to sterilize entire solar systems.  Kettrick, though an Earthman, grew up and spent his career in the Cluster until he was exiled from the Hyades two years ago for breaking some silly protectionist trade laws (the government calls that "smuggling.") Seeing as he knows all the ins and outs, all the languages and cultures, of the Cluster, he is the perfect candidate for the job of playing gumshoe out there and getting to the bottom of the eggheads' suspicions about a star poisoning device that, rumor has it, is known as "the Doomstar."

Once Kettrick is back in the Cluster we get the hard-boiled detective stuff we should perhaps expect from Leigh Brackett's husband!  Some of Kettrick's old buddies, including his alien former girlfriend (for whom Kettrick is still carrying a space torch), aren't too happy to see him, and when somebody tries to murder Kettrick by sabotaging a boat he is a passenger on, it looks like they really aren't happy to see him.  Can it be that some of his old friends, the aliens he "went native" with as a youth, are actually part of the Doomstar conspiracy?  Trust no one, Johnny!

Hooking up with some other of his many friends in the Cluster and their old decrepit space ship, Kettrick travels from system to system, trading goods and seeking revenge on the boat saboteur while investigating this whole Doomstar business.  After lots of close calls and tense conversations on several different worlds (featuring eight different alien races), in the end, Kettrick leads a bunch of stone age alien tribesmen in an infantry assault on the ground-based missile battery whose cobalt-tipped munitions will, in mere minutes, turn the local star into a gamma ray death machine.

Doomstar reminded me of the kind of adventures Han Solo or Lando Calrissian might have had before getting involved with that troublesome Skywalker clan: travelling from planet to planet via hyperspace, dodging the authorities and buying and selling goods among disparate intelligent species.  Kettrick even has a big hairy alien sidekick and flies in a temperamental old ship that needs a lot of maintenance, and, like Solo and Calrissian, lays aside his hopes for personal gain to instead fight for the greater good.

The characters in Doomstar all have believable and interesting motivations and relationships, a welcome improvement over the flat characters in the 1920s stories of space war by Hamilton we were talking about earlier.  Unfortunately, this novel lacks the driving energy of those stories from Crashing Suns, the gusto and horror of the combat and torture that made up so much of those tales.   Johnny is not the kind of hero who is master of his fate and drives the book's plot; rather he often seems to be at the mercy of events and of forces beyond his control, and we repeatedly see him manipulated, protected or rescued by other characters (I associate such motifs with those hard-boiled mysteries in which the reader and the main character don't know what is going on until the end of the story.)  Doomstar's narrative feels more episodic than tight, though the individual episodes are all entertaining, if not thrilling.

I often wonder how these old stories would play in our 21st-century world in which everything is political and everybody is liable to be offended.  Laissez faire types might appreciate that our hero is an unabashed businessman out to make a profit (kind of like a Poul Anderson character) and the text's implicit idea that trade brings different cultures together amicably.  The whole book could be seen as a celebration of diversity, with Kettrick friendly with and working closely with numerous alien individuals and polities, and Kettrick even gives a lecture on tolerance to his Earthling date when she says that aliens give her "the creeps."  But on the other side of the social justice ledger we have the fact that most of the female characters in the book are ditzes or selfish, treacherous, femmes fatales.  Doomstar vaguely reminded me of Rudyard Kipling's The Light That Failed, which--as I read it at least--argues that women are nothing but trouble and the best life for a man is to be among other men, having risky adventures far away from "civilization." Some might see Doomstar as guilty of romanticizing "cultural appropriation" and the "exoticization of the other," and the Edward Said definition of "Orientalism."

A decent space adventure, suitable as an entertainment.

The last page of my copy of Doomstar has an ad for three novels, none of them SF. There's an important mystery novel, a minor gothic romance thing, and a minor adventure caper apparently designed to appeal to fans of Burt Reynolds movies.  Even though they only advertise three titles, the good people at Belmont Tower include an order form with space for five titles, plus space for four alternates.  Just try to put yourself in the shoes of a guy who ordered a novel about a "Southern stock car racer cum hillbilly hoodlum" and opens up his mail (after waiting four weeks!) only to find the sole available alternate was the tale of Lady Barbara and her trials in gloomy old Cameron castle! 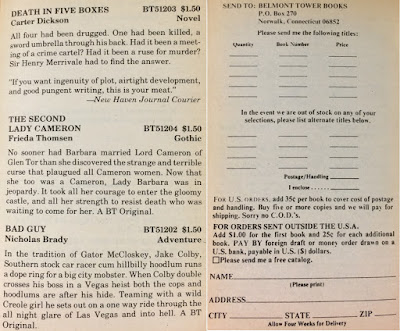