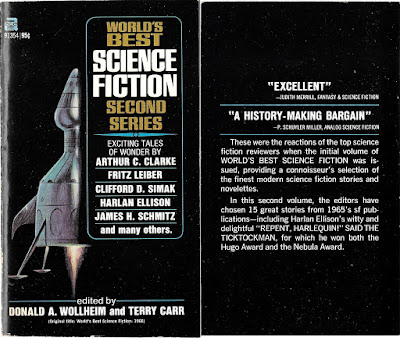 I was lucky enough to find a bunch of exciting SF paperbacks for a dollar each on a recent visit to a central Ohio Half Price Books.  Let's get started on the stack with Donald A. Wollheim and Terry Carr's World's Best Science Fiction: Second Series, the paperback version of World's Best Science Fiction: 1966.  Today, four stories, all from 1965 SF magazines, by some pretty big names in the SF biz. 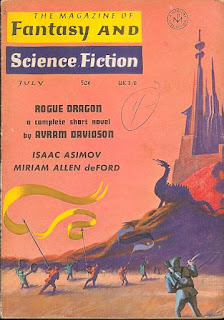 "Becalmed in Hell" by Larry Niven

The narrator and his comrade Eric spent four months flying to Venus, and are now exploring its dense 600 degree atmosphere from within their space ship.  Eric, I should note, is a disembodied human brain whose nerves are connected to cameras and the rockets and so forth so he can control the ship like it's his own body.  But then, trouble.  Eric can't feel the ramjets, so the narrator has to go out into the deadly Venerean atmosphere to conduct repairs.  But is the problem mechanical, or psychological?

This is a good example of the type of hard SF that seriously tries to figure out what an alien planet might be like and how NASA might try to explore it, a story full of science and engineering. Niven also includes lighthearted references to less realistic SF stories about adventures on Venus and movies about disembodied brains.

"Becalmed in Hell" first appeared in F&SF and has been widely anthologized; it actually appears in another book I own, Damon Knight's A Science Fiction Argosy, from which we read "Lewis Padgett's" "The Cure" back in 2015.

I think this may be Vinge's first published story; it appeared originally in Michael Moorcock's New Worlds.  Back in 2015, I praised another early Vinge tale, 1968's "Grimm's Story;" like that story, "Apartness" involves ships, which is fine by me--I can't swim, but I love stories about the sea and one of the things I miss about New York is looking at the ocean and all the ships and boats on the river and in the harbor.  "Apartness" is also a lament about racism and intolerance and man's propensity for war.

It is the post-apocalyptic future!  A nuclear/biological/chemical war has obliterated the Northern Hemisphere; South Africa and South America have somewhat stable, somewhat autocratic, societies with an 18th or 19th century level of technology (muskets, sailing ships--one elite guy has a revolver.)  Australia still has modern technology, but they aren't sharing it, feeling humanity is not ready for it yet.

The narrative follows a South American scientist (he studied in Australia) and his team; they are on board a ship of the South American Empire, on the quixotic mission of searching for Coney Island, which most of the superstitious Latin Americans of the dark future think is a floating island which travels the world (alright! a New York-centric joke!)  The scientists know better, but keep mum--it is not healthy to cross the astrologers who surround the Emperor.  Anyway, the expedition investigates a primitive settlement in Antarctica.  After some tense scenes reminiscent of accounts of Cook's voyages and scenes in which clues are discovered, the scientists learn that these Antarctic villagers are descendants of the few white people who escaped South Africa alive after the blacks won the race war there which followed the cataclysmic war in the North.  In the final scene a South African diplomat expresses the desire to observe the Antarctic tribe and gloat over the fact that South African blacks are now more advanced than the whites who oppressed them generations ago, while the protagonist worries that another apocalyptic war, this one between the African and South American empires, may be inevitable.

This story is well put together, but I've been exposed to so much anti-racism and anti-war material in my life that the story's "meaning" feels a little banal.  People nowadays might accuse the story itself of being racist: the white Australians still have all the knowledge and technology of the 20th century but refuse to share it with the Hispanics and blacks, the Hispanics are ruled by a dictator and a superstitious aristocracy ignorant enough to not know what Coney Island was, and the blacks have an empire which Vinge suggests is animated by vengeful hate. 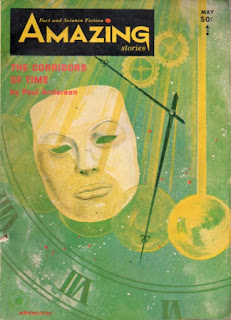 "Over the River and Through the Woods" by Clifford D. Simak

"Pastoral" is the word often used to describe Simak's work, and, sure enough, the first scene of this story features a woman in a farmhouse kitchen canning apples.  Two children come to her door, claiming to be her grandchildren.  As we readers realize at once, and the farmer's wife realizes after looking into their bags, these kids are refugees from the future, when aliens are about to take over the Earth.  The kids have brought anti-cancer drugs, which will presumably extend the life of (great-great-) Grandma, whom future records indicate will die of cancer in 1904, just eight years from the present.  Will all this alter history?  Simak raises the question but leaves the answer up in the air.

Simak often writes these sentimental things suggesting simple farm life is better than urban modern life, and I guess if aliens were killing everybody in the 21st century, the 19th century would look pretty good.  Otherwise, I'm not really on board with his attitude.  It looks like "Over the River and Through the Woods" has come to be seen as representative of Simak's entire body of work.  Ursula K. LeGuin included it in her anthology designed for use on college students, 1993's Norton Book of Science Fiction, and it is the title story of a 1996 collection of Simak stories.  It first saw light of day in Amazing.

Acceptable.  I can recommend it more strongly to people who enjoy scenes in which people are astounded by zippers and confused by talk of airplanes and rockets.  ("They talked of plains....and rockets--as if there were rockets every day and not just on the Fourth.") 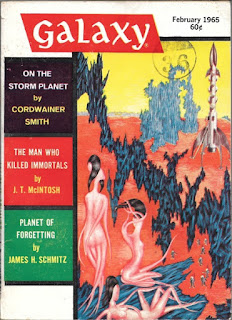 The last time we met James H. Schmitz he was regaling us with stories about female intelligence operatives of the far future. "Planet of Forgetting," first seen in Galaxy, is in the same vein. (Schmitz is one of those writers whom the cognoscenti tell us we should like because he includes strong female characters, and those of us who don't need to spend any more of our brief lives sitting through tendentious preaching are fortunate in that Schmitz's stories--in my experience at least--aren't satires or lectures but straightforward outer space thrillers with a woman slotted into the super spy role.)

Earth intelligence operative Major Wade Colgrave wakes up on an alien planet with amnesia--how did he get here?  As the story's thirty-odd pages unfold we switch back and forth between Colgrave trying to survive on the planet, which is full of weird animals, and flashbacks to the mission that landed him here.  You see, the evil space empire of Rala was preparing to invade the territory of the Lorn Worlds, an ally of Earth, and Colgrave was carrying to Earth the secret dossier on Rala prepared by the Lorneans when his ship was captured by Ralans.  Instead of just imprisoning or murdering him, the Ralans tried to coax him into becoming a double agent, giving him the opportunity to escape in a lifeboat, dossier in hand.  The Ralans catch up to Colgrave and, with the fortuitous aid of the local fauna, he foils their pursuit.

This is an entertaining Flash Gordon/Star Wars type of thing--Colgrave shoots lots of people with his energy pistol, puts on an enemy uniform as a disguise, is menaced by monsters, that kind of stuff.  We've all seen this sort of thing a hundred times, but some of us (including me) still enjoy it if it is done well.  Schmitz also includes fun gadgets in addition to the various types of futuristic guns, like a space suit that can fly in the atmosphere and a sort of man-hunting drone.  The explanation of how Colgrave lost his memory and the implications of this phenomenon are also good.

A solid adventure/espionage story.  (By the way, Colgrave may be a man, but the lead Ralan agent in the story turns out to be a beautiful woman!)

So far World's Best Science Fiction: Second Series is shaping up to be a great collection.  More from its pages in our next episode.

Because I have an abiding hatred of everything from the 21st century, when my wife wants to hang out and watch TV I usually insist we watch TV shows that are 20 years old, at a minimum.  One of the individuals prominent in the middle of the 20th century with whom we have become familiar thanks to my idiosyncratic viewing proclivities is Bennett Cerf, an important publisher who was a regular panelist on What's My Line? (Libertarian types might find Cerf's memoir of his relationship with Ayn Rand interesting.)  Cerf had a reputation as a humor writer, and actually published numerous books of jokes.  My wife and I find his renown as a funny man incomprehensible, as his jokes on What's My Line are universally terrible, and the stories in the one of his joke books which we picked up at an antiques mall are practically anti-jokes, anecdotes lacking any punchline, like something out of Jim's Journal.

Anyway, it was a cause of great surprise and hilarity in the MPorcius household when I opened my copy of World's Best Science Fiction: Second Series to find Cerf's face smiling up at me from an advertisement for the "Famous Writers School" of Westport, Connecticut.  Whether this ad was included in the book by Ace, or was just used as a bookmark by a previous owner, I don't know, but the ad does include some points of interest to all you SF fans.  For one thing, Rod Serling (whom my wife, a better comedian than Cerf, always calls "Rod the Bod") is one of Cerf's partners in crime at the Famous Writers School, and secondly, a SF author I never heard of before, who nonetheless has a long list of publication credits at isfdb, Robert Lory, credits Famous Writers School with getting his career going.

Click the scan below to grok the bright image of Famous Writers School presented to the world by Cerf and his cronies, and then read the Wikipedia article on the school to get a look at the shadowy truth behind the glamour. 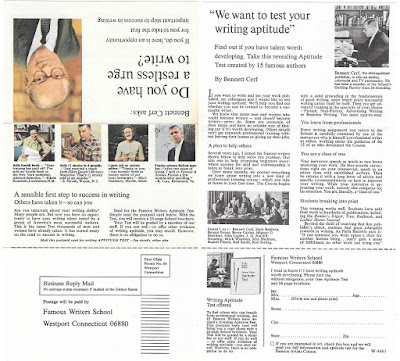