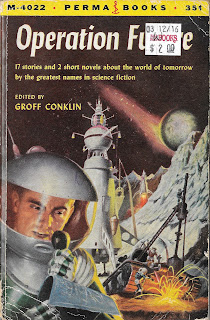 Last week I purchased Operation Future, a 1955 anthology edited by Groff Conklin and put out by Permabooks, with the last pennies remaining on the Half-Price Books gift card I got as a Christmas gift.  Having just read a bunch of deliberately innovative stories from the 1970s, let's check out some stories from the late '40s and early '50s by Theodore Sturgeon, Murray Leinster, Jerome Bixby and Henry Kuttner and C. L. Moore; perhaps these are the sorts of stories that laid the foundations for that 1970s work, or the sort of stories those "Me Decade" writers were rebelling against.

"The Education of Drusilla Strange" by Theodore Sturgeon (1954)

Editor Groff Conklin's introduction to this novella (it's like 36 pages here) made me laugh; in my last blog post we witnessed Barry Malzberg make the case that after ten years or so a SF writer should retire because he is out of ideas.  But Conklin here, comparing "The Education of Drusilla Strange" with Sturgeon's 1940 "Derm Fool," tells us that Sturgeon has "matured in the short space of 14 years, both in writing ability and in richness of conceptual grasp."  I suppose these assessments are not mutually exclusive (a guy could write the same basic story again and again for 15 years and get better at it with practice), but Conklin and Malzberg certainly seem to have contrasting attitudes about whether an enduring career leads to growth or degeneration.

A spaceship drops a beautiful naked woman off on the seashore--she is an alien with psychic powers and sophisticated science and engineering knowledge, exiled to our pathetic and disgusting planet of Earth for the crime of murder!  Not only does she have to live among us ignorant schlubs, but alien torture satellites beam down into her mind the beautiful music and art of her sophisticated homeworld, a painful reminder of all she has lost!

"The Education of Drusilla Strange" is a quite good story that takes the adage "behind every great man is a great woman" and runs with it.  The plot is solid, and full of surprises; Sturgeon gets you to believe one thing about the alien exile or her homeworld or some other character, and then later pulls the rug right out from under you, telling you that the opposite is true. He does this in such a way that it doesn't feel like a cheap trick, but comes as a pleasant surprise that feels quite natural.

The alien, who takes the name of Drusilla Strange, thanks to her superior brain, ultra keen senses and mind reading abilities, has no trouble fitting into Earth society and making a decent living.  She takes up with a musician, Chandler Behringer, and, by designing a superior guitar and amplification system and even doing clandestine surgery on his arm to give him greater dexterity, succeeds in making him the world's finest guitarist!  She has an ulterior motive in doing this that reflects how miserable she is on Earth--she manipulates Chandler into projecting her own alien-style music back up at the torture satellites in hopes this act of insubordination will trigger a bombardment from the satellite which will put her out of her misery!

Fortunately for everybody, another exiled alien, Luellen Mullings, whom Drusilla initially thought was a vacuous trophy wife, saves the day.  Luellen, who is married to a novelist whom she has been shepherding to greatness, reveals the truth to Drusilla about their homeworld (it is decadent and corrupt and in terminal decline) and the Earth (it is young and vital, the "hope of the Galaxy") and how she can enjoy her life on Earth, and contribute to Earth's rise to greatness.  It turns out that Earth's history is full of alien exile women who have been inspiring human men to heroic deeds! A hopeful and happy ending, though I presume one which will not meet today's standards for thinking about gender roles.

All the little scenes and elements are good (Drusilla's reactions to Earth technology and customs are engaging), and the story as a whole is well-paced and constructed.  I really enjoyed ol' Ted's work here--this may now be my favorite thing by Sturgeon! (Feel free to check out the many ups and downs in my relationship with Sturgeon over the course of this blog's life!)

It looks like it has been over three years since I have read anything by Leinster.  "Cure for a Ylith" is one of those traditional SF stories in which a scientist uses high technology and trickery to resolve the plot and achieve his goals and trigger a paradigm shift in his society, and it is pretty good.

Planet Loren has suffered under the tyranny of the monarchy for centuries.  Garr, a medical researcher, is one of the tiny handful of Lorenian subjects permitted to travel to another planet via the interstellar teleporter system.  He returns to Garr after two years on Yorath, bringing with him a new device.  The device, he tells people, is able to pick up transmissions of such low power that they have never been detected before.  When people test out the device (by putting on a headset) they report that they have had conversations with deceased relatives--the device apparently allows communication with the immortal souls of the dead!  Good people who use the machine receive comfort and advice from their relations in the afterlife, while people who have misbehaved receive dire warnings of punishment!

Garr finds himself in the royal court after being called upon to help treat one of the King's pet monsters (the "Ylith" of the title.)  He makes sure that the King learns of the Yorathian device and tests it out himself.  This results in catastrophic internecine warfare among the palace guard and aristocracy--among the two million dead are the King and almost all his flunkies.  The monarchy collapses, hopefully to be replaced by a more responsible government.

As Garr explains in the final scene of the story, the Yorathian machine doesn't really communicate with the dead--it brings to vivid life the user's superego, personified as a trusted deceased relative.  (This sounds kind of dumb as I type it, but I felt like it worked as I read the story.)  The King's warped superego warned him of traitors among the elite, inspiring an attempted purge that set off the fighting.

Leinster does a good job of quickly sketching out his setting and characters, economically bringing it all to life.  I also like the plot.  "Cure for a Ylith" is a solid piece of work; can it be time for me to explore the unread Leinster books I have on my shelf: Quarantine World, Space Captain and The Greks Bring Gifts?

Bixby's is a pretty prominent name in SF, but I am not very familiar with his work.  He of course wrote the immortal classic "It's a Good Life;" I also enjoyed "Vengeance on Mars" a few years ago, as well as some of the films he contributed to, so I welcome a chance to become better acquainted with him.

"The Holes Around Mars" follows the investigation of strange geological phenomena on the Martian surface by the first Earth expedition to the red planet.  I'm afraid readers will figure out the answer to the mystery long before the scientists and astronauts do.  I'd judge this story a little slight and kind of silly (a main theme of the tale is the puns made by the expedition's leader, and there is even a "he was so scared he shit his pants" joke) but it is a pleasant entertainment and I'm giving it a passing grade.

"Project" is the main reason I bought Operation Future; I am keen on Kuttner and Moore, and a quick look at isfdb on my battered iphone while at the store indicated that this story has appeared in no other book.

It is the 21st century, and the world is ruled by an autocratic "Global Unit;" only a tyrannical one-world government, it is believed, can keep a lid on nuclear power and prevent the rise of dangerously powerful mutants (homo superior), the product of limited atomic wars.  The Global Unit, however, is not truly in charge--it accepts without question the advice of the scientists of the secretive Council at Mar Vista General.

The people, and some Senators of the Global Unit, are sick of the lack of transparency into the doings of the eggheads who truly rule the world from Mar Vista; no outsider has ever been allowed inside the facility since the foundation of the current governmental system.  So the most pugnacious of the Senators, Mitchell, insists on being allowed to investigate the secretive campus, and his findings will be broadcast to the world instantly from his little hand transmitter!

The scientists are afraid that the truth of their work will cause a revolution and they will all be lynched by the ignorant masses. And what is this truth?  Well, not only did they engineer that whole limited atomic war business to increase their own power, but they have kept one of the dangerous homo superior mutants alive, in a sort of suspended animation which prevents it from maturing; they have been picking its brain, passing off its brilliant ideas as their own, while keeping it from reaching its full, world-shattering potential.  Luckily, they are mere hours from activating a super weapon which will give them total power; if they can just distract and delay Mitchell for a few hours they will have absolute control and be able to ignore any attack that may come from the Global Unit's military apparatus, much less a lynch mob.

Just after Mitchell, being held at gunpoint by one of the boffins, learns how much the Mar Vista scientists have been manipulating the rest of the world for decades, the ostensibly retarded homo superior reveals that he in turn has been manipulating the scientists!  He has only been pretending to be retarded, and has in fact achieved his full potential!  This superman will now take over the world, controlling the aforementioned super weapon and infiltrating its homo superior offspring among the homo sapiens populace until homo sapiens is extinct.

This story is disappointing; no wonder "Project" doesn't appear in any later anthologies!  It has no human feeling; it takes no ideological stand for or against human liberty or for or against the rise of homo superior; all the characters are bland and uninteresting.  The whole thing comes off as a boring history lecture about a complicated series of events you can't bring yourself to care about.  Too bad! 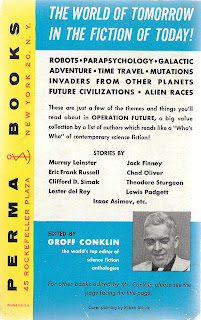 Both the Sturgeon and the Kuttner and Moore stories include shocking revelations that flip what we thought was going on 180 degrees, but Sturgeon's twists feel natural and are closely tied to believable and touching characters, while the twists in "Project" had me asking, "Who cares?"

Sturgeon's "The Education of Drusilla Strange" is the stand out here, while the Leinster and Bixby are fun entertainments.  The Kuttner and Moore is worse than filler, it is a waste of time.  Sad, but true.

There are 15 more pieces in Operation Future, and we'll read some of them before the book goes back on the shelf.
Posted by MPorcius at 9:50 PM