I recently expressed an interest in Harlan Ellison's story "Satan is My Ally," which appeared in the May 1957 issue of Fantastic. Commenter ukjarry helpfully pointed out that you can read old issues of Fantastic at archive.org, but too late; my itchy trigger finger had already ordered from ebay the Spring 1969 issue of Science Fiction Greats, the "All Harlan Ellison Issue."  Let's check out "Satan is My Ally" and three other stories by Ellison that appeared in Fantastic and Amazing in 1957, stories which have never been printed in book form.

"The World of Women"

Science fiction is full of utopias and dystopias in which women are in charge of men or there are no men whatsoever (during the life of this blog we've talked about Joanna Russ' short story "An Old Fashioned Girl," Wilson Tucker's Resurrection Days, and Edmund Cooper's Gender Genocide) and it is good to see Ellison in there swinging with the best of them! 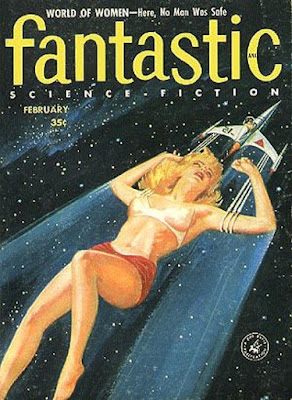 For centuries Arka III, the world where women outnumber men two to one that is ruled by five women made immortal by special "anti-death drugs," has lived at peace with neighboring star systems.  But recently the Arkan women have started bombing and conquering other planets, killing billions of innocent people!  The Earth government receives a message from a secret informant on Arka III: one of the five immortals has exterminated all men on the planet and launched the attacks because her anti-death drugs have driven her insane!  Our narrator, Aaron Deems, sneaks onto the planet, and puts on a "lifeshell," a skintight organic suit that makes him look like a woman.  Elaborate hypnotic suggestion therapy performed on him back on Earth even helps him think like a woman.  Thus disguised, he has to establish himself in the capital city, contact whoever it was who sent the message, and figure out which of the five immortals is the maniac and eliminate her!

A fun fast-paced SF caper full of cool gadgets and processes that can manipulate physical matter and the human mind, complete with a traditional SF ending in which the heroes use technology and logic to outwit the villains.  "The World of Women" is also ripe for some kind of feminist analysis, as it has a nuanced view of women, with resourceful female characters both aiding and opposing the hero and a male character forced by circumstance to act and even think like a woman.  Thumbs up!

"The World of Women" was the cover story of the issue of Fantastic in which it appeared, as well as the cover story of Science Fiction Greats of Spring 1969.  The illustration accurately depicts the fact that Deems stores his lifeshell outside his tiny scout ship and pulls it through space on chains, but the artist's inadequate handling of perspective leaves the viewer suspecting the shell is like a hundred feet tall.

Paul Vaszovek is a genius scientist, the one man who knows the secret of "the energy probe."  When the armies of the self-proclaimed Superior Race win a world war and take over all of Earth, they try to torture the secret of the energy probe out of Vaszovek.  Meanwhile, Vaszovek's young son Peter is educated in the "Wasps," the Raceist youth corps, indoctrinated with all the beliefs of the world conquerors. 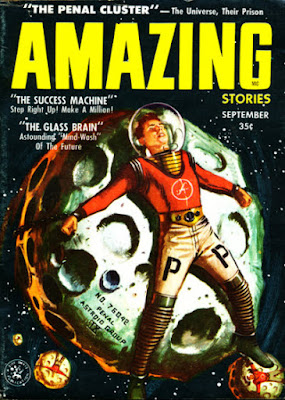 Paul Vaszovek refuses to give up the secret of the energy probe, so the Raceist hierarchy goes to Plan B--hooking father and son up to a brain-reading machine.  Because they share so much genetic material, information can be read from the father's brain and fed into the son's brain.  This process takes months, but in the end young Peter has the information the Raceist leadership wants.  But--twist ending--the brain machine also imbued Peter with his father's anti-racist values!  So Peter uses his newfound knowledge to assassinate the assembled Raceist high command--he points his middle finger at them (groan) and fire erupts from the digit, immolating the Raceists!

The plot of this story is good, and I like almost anything about tinkering with people's brains, but the villains and setting are weak and this undermines the story's emotional impact.  The reader is supposed to feel a catharsis when Peter gives the Raceists the finger and incinerates them, but the villains are too overdone, too cartoonish to naturally inspire a distaste for them in the reader.  (Besides the in-your-face Nazi analogy, Ellison lays the descriptions of the torture inflicted on Vaszovek and how fat, swarthy, jowly and oily the top Raceist is very thick.)  It feels too much like Ellison is just telling us to hate them, rather than painting a believable picture of people who deserve our hatred, that he is stacking the deck in a way that obviates any possible dramatic tension.

(Ellison's villains here pose an interesting contrast to the revolutionary mobsters in Barrington Bayley's novel Empire of Two Worlds, which we just read.  Bayley's protagonists commit a multitude of atrocities, but, just like imperialists and revolutionaries and gangsters in real life, they excuse their crimes against humanity as a response to upper class corruption and as part of a big idealistic project.  It is common in real life for people to excuse or even lionize a Lenin or a Napoleon or a John Gotti, so the reader of Empire of Two Worlds has every reason to suspect other readers, and Bayley himself, may well be ready to excuse and praise the scoundrels in the book; this lends the book ambiguity and tension, keeping the reader guessing and maintaining the reader's interest.)

It seems possible that in writing this story Ellison was indulging in some sort of wish fulfillment, giving vent to a desire to get revenge on Nazis (and maybe WASPs?); Ellison seems like the kind of guy who doesn't resist passionate impulses and is into "getting even."  I think the angry-young-man sound and fury of much of Ellison's work appeals to a lot of people, but sometimes, to me, it feels shrill and self-indulgent, even childish; when I read the famous "Tick Tock Man" story I was surprised at how silly it seemed.

This is one of those SF stories about how the cognitive elite can and should manipulate the ignorant masses for their own good. 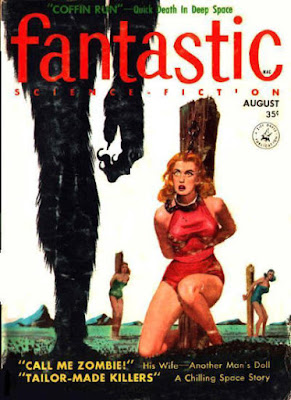 Ninety-five percent of humanity has fallen to an artificial plague!  The few survivors are very resentful towards scientists because it was scientists who created the plague!  This resentment is indiscriminatory, so the people of Coshocton, Ohio (Ellison's home state and the current location of MPorcius HQ) harass the staff of the laboratory on the edge of town, even though the scientists there are trying to develop a cure for the plague.

The boffins run a complicated and ridiculous conspiracy to get the citizens to leave them alone so they can get on with their work.  They sneak out of the lab at night to kill the proles' cows and even kidnap their leader's child, hoping to egg the commoners on, driving them into burning down their lab!  Then the plebeians will think they have killed the scientists, and then leave them alone so they can continue working in peace in their super secret underground lab!  Most ridiculously, the Ph.D.s manipulate one of the townspeople who has joined them into getting angry enough at them to leave and rejoin the ignorant masses, and then they coax him into helping them once again after the lab is razed.

The plot is very unwieldy and convoluted, and I am prejudiced against these "experts should run our lives" stories anyway.  "Phoenix Treatment" also lacks any particularly good elements to redeem it; gotta levy a negative judgment on this one.

(When I read "The Glass Brain" I wondered if Ellison was using the story to work out some of his anger and animosity towards racists and Nazis, and when I read "Phoenix Treatment" I wondered if it was set in Ohio because Ellison had some issues with the people he grew up among there.)

"Satan is My Ally"

Here it is, the impetus for my purchase of this 48-year old magazine!

"Satan is My Ally" is a wacky and incredible tale, the absurdities of which Ellison papers over by invoking the supernatural powers of Mephistopheles himself! Businessman Paul Dane (is it a coincidence that "Dane" is but one letter away from "Dante?") is a murderer, a thief and a philanderer who is summoned to Hell for an audience with Satan.  Ol' Scratch conscripts Dane and sends him out to California to take over a fraudulent cult (though first Dane kills most of his East coast contacts.)  In La La Land, at Satan's direction, Dane turns the cult into a devil-worshipping outfit and wins converts via a theatrical performance that is broadcast live on television. 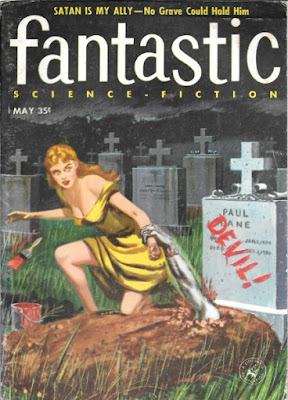 Dane's performance consists of having a police officer empty a revolver into his chest on stage at the Hollywood Bowl, killing him.  (This insanity is permitted by the authorities because Satan fogs everybody's mind.)  Then, at a time that was announced just before he was shot full of holes, Dane rises from his grave in front of a crowd of onlookers and TV cameras.  This astonishing event attracts multitudes to join the Satanic cult, and Dane puts on the same exhibition every few weeks, until he finally has his comeuppance.  Satan warned him that if "a good woman finds you out, and labels you what you are, then the show is up," and, sure enough, a naive woman who followed Dane out to the left coast because she is blindly in love with him, once disillusioned, paints the word "DEVIL" on Dane's tombstone while he is still in the grave, making his death permanent this time.

I'm giving this one a passing grade because the first half of the story, out East, is good: the descriptions of Hell and the Devil, and depictions of Dane's journey down to the underworld and the many atrocities he commits, are effective, told with a kind of breathtaking brio.  But the main plot, what with the televised rising from the grave and the inexplicable way Dane's pact with Satan is voided, is just too convoluted and outlandish to take seriously, and it is not funny, either.  Disappointing!

I can wholeheartedly recommend "The World of Women," but as for the other three, well, it is not that surprising that they have never been published in books.  Probably they would have benefitted from revision, but Ellison was presumably a very busy man in 1957 with little time to polish and tighten these things up, especially if editors were buying them in the condition in which he sent them.

There are three more pieces in the 1969 all-Harlan-Ellison issue of Science Fiction Greats, and I'll be reading them soon.
Posted by MPorcius at 12:02 AM