I've been trying to resist the urge to buy more books, but I got a gift card for Half-Price Books for Christmas and, when I went shopping for Kinks CDs to help make more tolerable all the driving that is an inevitable part of post-NYC life, I couldn't resist Generation, a 1972 anthology showcasing "new stars of science fiction" edited by David Gerrold and Stephen Goldin.  (You'll remember I read Gerrold and Goldin's 1974 anthology Alternities, and that I have enjoyed four or five novels by Gerrold and two by Goldin.)  Not only do we have here an absorbing and crazy Robert Foster cover, but rarely-reprinted stories by Gene Wolfe and Barry Malzberg which I have never read, and numerous stories by other interesting writers.

On the Acknowledgments page Gerrold gives us a hint of the odd history of Generation, saying it was assembled in 1969, but publication was delayed by unspecified problems (problems he takes care to say were not due to Dell, the publisher) until 1972.

Going in to Generation I assumed I would be facing very "New Wavey" stories.  In his introduction Gerrold takes pains to call the volume a collection of "speculative fiction," tells us that the best SF writers are no longer "preoccupied with science and scientists," but instead write about "what it means to be a human being," and that SF is no longer "content merely to entertain."  Gerrold admits that some "writers are still doing the space operas," but they "don't count," they are "no longer where it's at."  I find this needlessly hostile attitude a little irritating, and especially puzzling coming from Gerrold and Goldin--the books I have read by them, like Gerrold's Deathbeast, Yesterday's Children and A Matter for Men and Goldin's A World Called Solitude and Assault on the Gods, are full of entertaining battles involving monsters, laser guns, robots and space ships.  I also have the strong impression that Gerrold and Goldin are fans of old timey writers like Heinlein, van Vogt and "Doc" Smith.

More congenial is Harlan Ellison's back cover blurb, in which he subtly pooh poohs the idea of a collective "New Wave" and instead focuses on the fact that each writer is an individual talent.  In the past I have commented that one of the things I like about Ellison is that, while he has that angry young man thing going and is associated with pushing the envelope and encouraging innovative writing, he still has nice things to say about the writers of the past, people like A. E. van Vogt (whom he righteously championed as a candidate for the title of Grand Master), Poul Anderson, Edmond Hamilton, and L. Ron Hubbard.  You don't always have to tear down the old in order to build something new.

Enough preamble, let's check out stories in Generation by Wolfe, Malzberg, and Gerrold, as well as Vonda McIntyre and Gardner Dozois, and see if they are good representatives of the "fresh young talent" of 1969. 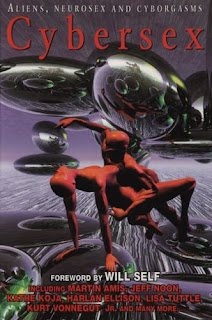 "It's Very Clean" by Gene Wolfe

Miles is a cultured young man (he reads Gunter Grass) and a virgin who has saved up a lot of money so he can go to a brothel where the whores are robots.  You probably remember that I've said Wolfe is my favorite writer, so you are not going to be surprised when I tell you that Wolfe very skillfully sets the scene and evokes our anxieties about our first sexual experiences and such socially and psychologically fraught practices as masturbation and prostitution.  And that the surprise ending actually surprised me. But what I say is true, this is another hit by the master.

"It's Very Clean" was published a second time in the 1996 anthology Cybersex, which has a hideously flat and busy computer-generated cover.  From Richard Powers, Robert Foster, Jeff Jones and Frank Frazetta to this?  Sad!

This story is so outrageous that I am reluctant to tell you it made me laugh until I cried.  But I can't lie to my public--this story is hilarious!

"Vidi Vici Veni" (the title is a joke for all you classics scholars out there) is a cold and dispassionate government report about the sex crimes of a "supervising maintenance operator" at a "tool and die plant."  (Full disclosure: Your humble blogger spent some months working on and off in a machine shop doing tool and die work in the late '80s and early '90s.)  The actual meat of the plot is sort of obliquely described, but it appears that the main character's work generated in him an irresistible sexual desire, which he satisfied not only with his wife, not only with a very surprised male stranger (yes, this story is in part a joke about rape) but then with sundry inanimate objects, including pipes and furniture.  The punchline of the story is that his activities become famous and, if I am reading the obscure text rightly, that America is swept by a mass movement of people who have sex with inanimate objects. 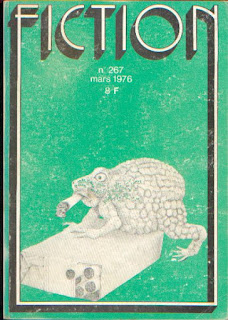 Maybe this story is a sort of lament that our modern society has become so mechanistic and we have become so alienated from our fellow humans that we can more readily feel for manufactured items than each other. Whatever the serious intent of the story, if any, it is so funny it gave me physical pain. If you are the kind of person who won't be offended by a joke in which a male rape victim tells the police, "it was more the surprise than the other thing; if I hadn't felt so depersonalized I might have enjoyed it," I recommend it highly.

(It would be great if somebody else who has read this would confirm my interpretation or provide an alternate one--the story really is opaque and tricky.)

"Vidi Vici Veni" has only been printed once in English, but was translated into French and included in a 1976 volume with a cigarette-smoking frog on the cover!  Zut alors!

"All of Them Were Empty" by David Gerrold

Gerrold, in his long intro to this story, says it is "a favorite child," one of his best stories.  He also tells us he wrote it while high on drugs, and didn't revise it--the first draft was the final draft!

"All of Them Were Empty" is a first-person narrative, delivered by Deet, a guy who smokes a lot of pot, drops acid, uses mescaline, and says things like "Doors like hungry mouths pulled at us," and "Cars like giant panthers prowled the night streets, rolling silent-rumbly through dark-lit intersections and wet gutter bottoms."  Deet is looking for a new high, but is afraid of heroin, so when he hears about a place offering "a new kick" he braves the "hungry mouths" and panther-like automobiles and makes his way through the city streets to the source of this new high, dragging his girlfriend Woozle ("She had sucking eyes") along.

In a narrow apartment two girls sell them the new kick.  Deet and Woozle strip naked and spread goop from a jar all over each others' bodies.  (This sounds like one of the oldest of the old kicks, but be patient.)  Tanks to the goop when Deet and Woozle hold hands they fly out into space, growing bigger and bigger until they dwarf the Milky Way and approach the limits of the universe.  Then they shrink and return to Earth, but somewhere along the way Deet lost Woozle, and when he gets back to the narrow apartment everyone is gone. This is quite bad, with a pointless plot and a style that is annoying, not only long and tedious, but weighted down by repellant "experimental" techniques which consist of mind-numbing repetition.  But I guess it strikes a chord with some people; "All of Them Were Empty" was not only included in the Gerrold collection With a Finger in My I, but would later appear in an anthology devoted entirely to stories about drug use, Spaced Out.

I thought McIntyre's stories "Only at Night" and "Recourse, Inc." were effective; and had hopes that "The Galactic Clock," which I believe has never appeared in any other publication, would be equally enjoyable.  My hopes were not realized.

"The Galactic Clock" is a long tedious story that consists almost entirely of obvious jokes.  Elroy Farnsworth is an academic who has bad luck.  When he drives he hits every red light.  When he walks he hits every "Don't Walk" sign.  When he puts important papers in the mail they arrive at their destination one day late and so he misses out on an important opportunity.  When he applies for a job the other applicant is a beautiful woman and the person doing the hiring is a lecher; another big opportunity missed. Page after page (21 in total!) of these kinds of jokes, jokes which are not actually bad, but which don't actually make you laugh, either.

As for plot, the plot is just one of the jokes writ large, an example of this dude suffering some misfortune.  I am going to have to give this one a marginal negative vote--it is not a crime like the Gerrold, but it is a pedestrian waste of the reader's time.

Here's another piece which, I believe, has not appeared elsewhere.

"Conditioned Reflex" relates the thoughts of infantrymen as they await the approach of enemy troops, reminiscing about their childhoods, regretting never having had children, expressing disbelief that death could come in just a few minutes, and so forth.  It is suggested that these soldiers may be among the very last human beings alive, and the impending battle may be the very last of a war that will destroy all of humanity.  Dozois uses the story to muse about the possibility that mankind is reflexively and inherently, destructive, or that society has conditioned people to be destructive.

This story is vulnerable to the charge that it is melodramatic and overwrought, and that it has no real plot.  I liked it anyway; the soldier's thoughts were all quite believable, even affecting, and the story is well-written, just the right length, and it kept my interest. Thumbs up!

The Malzberg story in Generation is one of the funniest things I have ever read, and all on its own generously repays my two dollars. The Wolfe is quite good, and the Dozois is solid.  The McIntyre is competent, but it is sterile, having no emotional intellectual impact.  The Gerrold is surprisingly bad.

Generation's 25 stories include pieces by Piers Anthony, David R. Bunch and Ed Bryant, writers I have some familiarity with, and two by the famous "James Tiptree, Jr.," a writer whom I hope to start reading soon. We will definitely be coming back to Generation.
Posted by MPorcius at 1:46 AM