Let's continue our exploration of Generation, a 1972 anthology of stories that were probably written in 1969, stories by people promoted as "the brightest talents of the new generation of science fiction masters."  Today we'll read stories by Piers Anthony, David R. Bunch, Ed Bryant (one each with James Sutherland and Jody Harper) and Chelsea Quinn Yarbro.

"Up Schist Crick" by Piers Anthony

In my teens I read lots of Piers Anthony novels--Xanth novels, the Bio of a Space Tyrant series, the Battle Circle series, the Chthon books, the Orn books, the Apprentice Adept series, and more--because there was a lot of sex in them.  They were practically pornography (at least to my naive mind) and in the pre-internet era pornography (for a teen-aged MPorcius, at least) was hard to find.

"Up Schist Crick" isn't providing me any reason to revise my view of Anthony as a guy who writes about sex.  Our hero is William Zether, a junior executive at a big manufacturing firm.  In the files Zether has found evidence that a branch of the company has been test marketing a new kind of material in a tiny secluded town, and that the company bigwigs have forgotten about it.  Zether goes to the little isolated town, thinking maybe he can somehow appropriate the invention and make himself rich.

Sure enough, in the little town he discovers everybody is using the new material, an unbreakable one-molecule-thick stretchable fabric which has a wide variety of applications.  The most provocative use is as a transparent one piece suit which keeps the wearer comfortable and safe.  Because the material is so very thin and absolutely impenetrable by liquids, women wearing it can have risk-free sex without any other sort of precaution.  This convenient form of birth control has lead to a culture of casual sex in the little town, a culture which Zether takes advantage of soon after his arrival.

There is a catch, however.  The woman Zether had sex with is very marriage-minded, and her guardian is ready to vigorously defend her honor, so the story's main plot thread concerns Zether's efforts to escape the area and the impending shotgun wedding, a real challenge because his car has broken down on the ill-maintained road leading to the town.

"The Lady was for Kroinking" by David R. Bunch

I've read a number of stories by Bunch and I haven't been very impressed by him, but here I am, reading him again.  Bunch stories are always short, at least.

"The Lady was for Kroinking" takes place in the future, and is mostly a dialogue between two characters, a man and a woman.  The "point" of the story is that the pace of future life is such that it drives people to sadism. The go-go life of the future fills people with rage and hate, feelings which, if left unvented, will cause dangerous levels of insanity.  So, the people of the future regularly patronize "Enjoy-Your-Hate houses," which are kind of like brothels, but instead of prostitutes these establishments provide realistic rubber dummies for customers to torture. Most of the text of the story consists of the woman's detailed description of the elaborate tortures she inflicted on a particularly interesting dummy earlier in the day.  Sample detail: the dummy had installed in its artificial head real lambs' eyes, so when the torturer penetrated them with red hot rods she could smell burning flesh.  The punchline/twist ending (?) of the story is when the man and woman kiss each other goodbye; they bite each other's lips so hard they both bleed profusely.

At five pages this story isn't quite long enough to get tedious, and I can't help but admire its audacity and bizarreness.  So I think I can give it an acceptable grade.

"Beside Still Waters" by Ed Bryant and James Sutherland

I have read several stories by Bryant, and have a better opinion of Bryant than Bunch; while some of Bryant's more self-indulgent and experimental pieces have aroused my distaste, he has also produced some well-written and well-constructed stories which I have liked.

James Sutherland has only one novel and four short stories listed at isfdb; one of the four shorts was slated to appear in The Last Dangerous Visions and has thus never been published.  (Oh, Harlan....[shakes head sadly.])

"Beside Still Waters" is a silly sort of story, one of those things in which some mythological creature suddenly appears in 20th-century America.  Bryant and Sutherland play it for laughs rather than trying to evoke a sense of wonder or horror.

Sidney Bates lives in LA, a divorced father with custody of his kids who has trouble meeting his alimony payments to his ex-wife Edna.  (I remember from my childhood viewing of Johnny Carson that California divorce law was a rich mine for jokes in the '70s; wikipedia indicates that California was the first state to pass a no-fault divorce law, in 1969.)  Bates has a pool, and dangerous creatures (a shark, a giant frog, a crocodile, etc.) and weather phenomena (an iceberg, a waterspout) have been appearing in it.  He contacts a psychic detective, who figures out what is going on: the pool draws water from a spring guarded by a beautiful naiad.  The detective summons and opens negotiations with the naiad, and there is a happy ending for everybody: the psychic detective has an affair with the naiad and when the supernatural creature learns that Edna, not Sidney, had the pool installed, one of the naiad's monsters kills Edna when she comes to visit to nag about her alimony payments.

This story is OK.

This is Harper's only credit at isfdb.  Gerrold tells us Harper is good-looking and worked as a go-go dancer in Beirut, Lebanon, in case you were wondering.  (As Karen at goodreads suggests in her review of Generation, Gerrold talks about the female authors represented in the anthology in a way that probably wouldn't fly today.)

This is one of those arty stories in which almost every line of prose includes a metaphor and in which the paragraphs of prose are separated by snatches of italicized verse.

It is the end of the world!  Almost everybody is dead!  But Lea, a young poet, is still alive, on a college campus in Manhattan.  She goes to an empty classroom and activates the recorded lecture on metaphysical poetry.  Then a young man with whom she has a relationship, for whom she has even written a poem, appears; he wants to have sex, and she is revolted by his blunt overtures.  ("Let's fuck.")  She reads him her poem and he calls it "rotten."

Lea resists the urge to go away with him ("It's incredible, what a wretchedly bad bargain we are together--even if there's no one else"), but then succumbs; after all, how should she expect people to act at the end of the world?  "It's the way it is now," he tells her.  "You got to take it like that."

This story is alright.

"Everything that Begins with an 'M'" by Chelsea Quinn Yarbro

Yarbro is a big success; she has published a huge stack (thirty or so) of those sexy vampire novels which (I assume) are mostly read by women, and she has won a bunch of big awards.  I didn't like her postapocalyptic novel False Dawn when I read it, but what do I know?  Gerrold tells us that this is the third story she ever sold--from little acorns!

"Everything that Begins with an 'M'" is about how the impoverished citizens of a tiny isolated village (in some kind of mythical medieval or early modern land, I guess) amuse themselves and enliven their dreary lives by spreading rumors and engaging in absurd speculations.  A mentally ill homeless man spends his time reclining at the "sand pit" where the villagers throw their refuse, singing to himself and tracing designs in the sand. When the tax collector comes to town he chokes to death on a hunk of meat, and, because the madman was scribbling on a piece of paper with a bit of charcoal at the same moment, the villagers begin to think the insaniac is some kind of wizard or holy man, and begin visiting him, hoping to receive sage advice, even making him a crude crown and giving him a fine robe.  The fact that the madman ignores them does little to shake their faith.

This is essentially the whole story.  Merely acceptable.

My reaction to all five of these stories was lukewarm; none of them is actually good, but none excited my resentment, either.  I can imagine people being offended by the Anthony and the Bryant/Sutherland for what they would call sexism (though whether we should admire or deplore the protagonist of the Anthony is left ambiguous, and he does suffer his comeuppance in the end, frustrated in all his designs and humiliated into the bargain); being shocked or sickened by the Bunch; being touched by the depiction of a sensitive woman being treated like a sex object by a brute in the Bryant/Harper piece; and finding the Yarbro piece amusing, but somehow I was not strongly affected by any of them.  Maybe I'm getting blase in my old age, maybe all the stories are successful on their own terms, all achieve what they want to achieve, but I am not really the audience for what they are doing.

More Generation in the future; I've decided to read a bunch of included stories by writers I've never heard of, always an interesting exercise.

My copy of Generation has bound within it a page of full-color advertisements.  Alas, these ads are not for science fiction books.  On one side, the people at Schick exhort us to embrace the new and different, in particular their new single-edged razor.  On the other is an ad for a free book of advice for car buyers; seeing as the book is produced by the people at Ford Motor Company, I doubt it includes my own advice to car buyers, that they buy a Toyota. 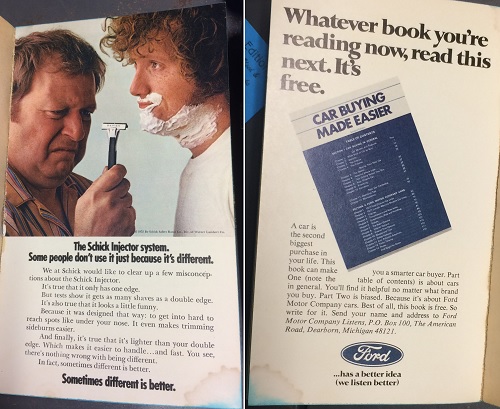