I have had mixed feelings about Norman Spinrad.  Back in my Manhattan days, long before I started this here blog, I read 1983's Void Captain's Tale and quite enjoyed it as a story about space travel and weird relationships, but when I started 1985's Child of Fortune I quickly abandoned it, sensing it was some kind of hippy utopia travelogue that was going to feel very very long.  Some years later I read 1967's The Men in The Jungle, which I finished but which I thought tedious and absurd; I wasn't crazy about its apparent message (that people who read genre fiction are perverts or Nazis or something) either--Norman, if I want to be insulted, I'll just call up my mother!

On an impulse, while browsing a huge antique mall on Route 70 after touring Westcott House in Springfield, OH, I purchased eleven issues of Analog, all from 1963 or '64, for $22.00.  These issues include three stories by Norman Spinrad--I think these may be Spinrad's first three published stories--and I decided to give them a shot.  All three of these pieces would later show up in Spinrad's 1970 collection The Last Hurrah of the Golden Horde, which Joachim Boaz at SFRuminations read and reviewed in its entirety back in 2014.  Let's see what Spinrad's early work is like, and if Joachim and I are on the same page this time. In the homogenized and sanitized world of the future, in which Tokyo looks exactly the same as New York and almost every position is a bogus make-work job, a man with a mustache and a cigar travels the globe, bumming rides and stowing away on aircraft.  He tells a bartender that he is looking for the gypsies, and that he is keeping the gypsy tradition alive.  What this means in practical terms is that he goes to playgrounds and sings old songs and tells old stories about pirates and heroes to kids, trying to spark in them a sense of adventure and romance and independence, things sorely lacking in the current safe and stable and sterile world.  Before the story ends we readers find reason to believe that the last Romany's efforts have not been in vain, that some kids have been inspired by him, and even that a new era of adventure, for those brave enough to seek it, will soon be found beyond the solar system.

This story is alright; its nostalgia and one-man-carnival elements reminded me of something Ray Bradbury might come up with. 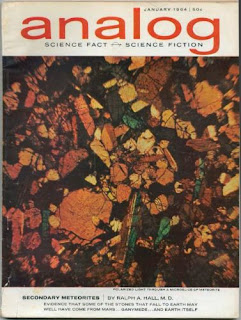 "The Last of the Romany" includes some weak but innocuous jokes; "Subjectivity" feels like one big weak joke.

In the future the Earth is so overpopulated that psychological and sociological pressures are going to cause a cataclysm, so the world government is determined to colonize extrasolar planets.  The scientists can't figure out how to make a faster than light drive, so colonists will have to be aboard starships for at least eight years before they reach their destinations.  Unfortunately, experiments indicate that even specially picked specimens, men and women of exceptional mental health, go insane after less than three years in the close confines of a starship.

Here come the jokes.  The government decides to experiment with sending not Earth's best into interstellar space, but "the dregs."  Trigger Warning!  The "dregs" include the mentally ill and homosexuals!  The government sends off a ship with a crew of schizophrenics, one crewed by sadists, one crewed entirely by gay men, one whose crew are all lesbians, among others.  None of these crews survives the psychological pressures of interstellar space.

The government tries a new tack with the thirteenth ship; the crew will be provided with hallucinogenic drugs, and told to take the drugs every day for all eight years of their trip to Centaurus.  Most of this brief story consists of the spacers dealing with their hallucinations.  At first the spacefarers can control their hallucinations, and share them; if somebody hallucinates a giant snake, she can make the other crewmembers see it.  Then the hallucinations, which for some reason are not cuddly kitty cats or the future equivalents of Sean Connery and Sophia Loren like you'd expect people stuck in a ship for sixteen years to summon up, but ravenous monsters like a dragon, a tyrannosaur, and the aforementioned Hyborian-sized snake, take on minds of their own.  Afraid of getting eaten, the spacers use their drug-induced powers to teleport the ship back to Earth, where a military unit has to confront the monsters, which have become all too real.

This story is ridiculous and it is not redeemed by being funny.  Thumbs down.  (Analog editor and SF legend John Campbell thought it good enough to include in the anthology Analog 4--tastes differ!) 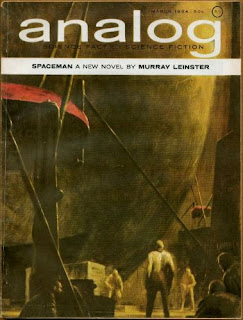 Here's the stuff!  A real hard science-fiction tale with starships, Einsteinian time dilation, paradigm shifts, space merchants, a ruthless and short-sighted government, even a sense-of-wonder man-is-going-to-master-the-Universe ending, all those classic SF elements we all love.

Mankind has colonized over 60 star systems, even though there is no FTL drive; people travelling between the systems go into a deep sleep and wake up decades later at their destination.  This means that Earth is always many years ahead of the colonies technologically, with space merchants selling the latest technology from Earth to the colonies, primarily in exchange for raw materials.  The story centers on two of the oldest space farers, a merchant and an admiral in the Earth space navy, who find themselves at odds when a scientist who may be able to invent a FTL drive flees from Earth.  The merchant wants to sell the egghead's ideas, and the colonies will be eager to buy them (FTL would put them on an equal footing with Earth), but the Earth government wants to keep FTL under wraps to maintain its dominance.

Lots of compelling and entertaining things in this story: descriptions of the technical and psychological aspects of space flight, starships chasing each other, an aside about what it means to be a gypsy or a Jew, characters with interesting and believable motivations who have to endure bizarre scenarios like being alone in a room for twenty years working on math equations and to make hard decisions about what their duties and interests really are.  I compared "Last of the Romany" to Bradbury; "Outward Bound" is perhaps reminiscent of Poul Anderson.

So, I'm scoring these moderately good, poor, and quite good.  How did Joachim rank them?  Well, we essentially agree on "The Last of the Romany" and "Outward Bound." Our big disagreement is about "Subjectivity;" I thought it was lame, but of the three it is Joachim's favorite!  He seems to like it because it is "ultimately nihilistic" and suggests that mankind is not up to the task of conquering outer space.

In his review of The Last Hurrah of the Golden Horde Joachim stresses that Spinrad's work is typically "bleak" and full of "rage," and notes that "The Last of the Romany" and "Outward Bound" are perhaps not very representative of Spinrad's oeuvre as a whole.  Maybe this is a clue that Spinrad isn't really for me, that I liked his most hopeful and traditional stories!

I thought the incentive plan described in this box on page 44 of Analog's January 1964 issue was interesting:

I wonder if Anderson and the other writers actually tailored their stories in an effort to secure the financial prizes described, which were awarded based on readers' votes. Anderson, the winner of the October '63 issue, got an extra $190.00.  I think that is like $1,500.00 in 2016 money!  Jackpot!

The last page of the January 1964 issue of Analog is a full page ad for merchandise from Edmund Scientific Co. of Barrington, NJ.  (You don't realize how cool your home state is until you leave.)  One of the items on offer is a set of dinosaurs and terrain molded in "unbreakable plastic" that sounds pretty damn awesome!  These little "bronthosauruses" and dimetrodons are not just for kids--they are usable as "off-beat decorations!"  I'd love to see a photo of these toys; I had a ton of plastic dinosaurs as a kid, and still have quite a few, and wonder if I am familiar with the molds they used for this set. 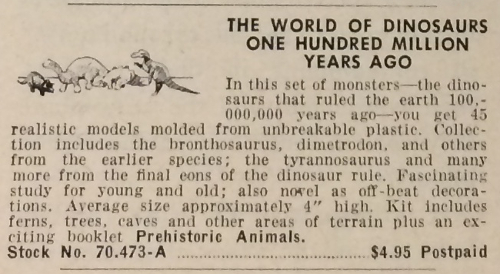