"Killibol's the world, the world we're going to transform.  It's like a bomb waiting to be set off.  We're going to release all the energies pent up in those cities.  We'll make a society, an empire, where almost anything will be possible...." 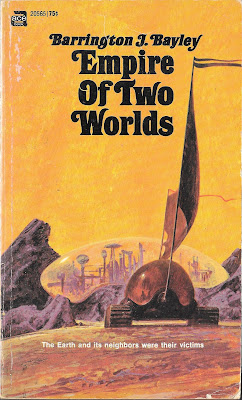 His fellow British SF writers Michael Moorcock and Brian Stableford have a very high opinion of Barrington J. Bayley, and when I recently read two stories by Bayley I gave them passing grades, so it seems the time is ripe to read a novel by Bayley.  Now, it is true that, via twitter, Joachim Boaz warned me away from 1972's Empire of Two Worlds, but the John Schoenherr cover of my Ace edition of the novel, and the Karel Thole cover of the Italian edition even moreso, lead me to believe it is the epic tale of a land warship crossing a desert to wage war on or liberate a futuristic city--to a kid like me who watched StarBlazers religiously back in the '80s, this is nigh irresistible!  Let's see if Empire of Two Worlds lives up to its illustrators!

Killibol!  Desert planet!  Colonized by Earthmen approximately a thousand years ago, this barren rock has no native life and cannot support any sort of agriculture, so the people of the labyrinthine cities (compared by our narrator to termite hives) eat goop grown in vats primarily from waste material.  (They call them "tanks" on Killibol, but I prefer "vats," myself.  That's right, I'm editing the "most original SF writer of his generation.")  All you stoners out there, don't worry, somebody somehow and somewhere is secretly growing marijuana on Killibol to help people take the edge off of hive living!  (Don't harsh everybody's buzz by asking why, if they can grow pot, they don't grow wheat, tomatoes and basil and eat spaghetti instead of vat goop.)

The upper levels of the hive city of Klittmann* are under government control, but the lower level slums (the "Basement") are in a state of warfare, warfare between various gangs.  Our narrator, Klein, a former metalworker turned muscle for one gang leader, Klamer, finds himself in the inner circle of Becmath, another gang leader, after Becmath takes over Klamer's territory.  Becmath is ambitious and intelligent, and has read some old books, so has developed a sort of Leninist dream of taking over the entire city and, as dictator, putting the vats, I mean tanks, under full government control.  For the good of the people, of course!

*When I was thirteen my friends and I would have laughed at this name for hours, and made jokes like "I'm trying to find Klittmann, where the hell is it, its like the hardest place to find in the world...." for weeks. 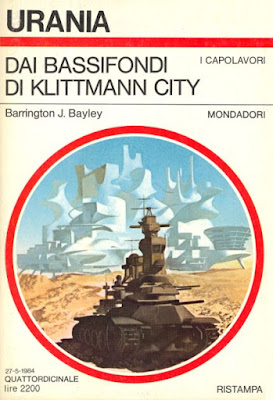 The police of Klittmann have big wheeled armored fighting vehicles called sloops, and Becmath has Klein construct a sloop for their gang, one with better weapons than the government sloops.  Then Becmath begins taking over the city, first the Basement and then pieces of the next level up.  Disaster strikes when the upper level police and some Basement dwellers who don't appreciate Becmath's rule combine forces and attack in concert; in the super sloop Becmath, Klein, and a few other ruthless criminal types escape the city into the lifeless wilderness, bringing along Harmen the "alchemist," the most knowledgeable man in Klittmann.

In the desert Becmath expresses his Napoleonic or maybe Alexandrian (with Harmen as his Aristotle?) ideas of a vast empire which, under his rule, will be devoted to "progress," and Klein swears an oath of allegiance to Becmath and his, at this point, purely hypothetical "state." Demonstrating their single-minded devotion to the State, Becmath cold-bloodedly murders a woman (a desert nomad) Klein picked up and has been having sex with, and Klein just shrugs off this atrocity.

A third or so of the way through the book Harmen leads the mobsters to an ancient teleporter thing that brings the scoundrels to the Earth of like a million years in our future.  (There's some mumbo jumbo about time moving faster on Earth than Killibol which is quickly forgotten.)  The human race has evolved, and artistic green-skinned people are at war with tall belligerent grey people who have been living on a terraformed moon for millenias and are now trying to conquer the Earth.  Becmath gets himself and his buddies ensconced high up in the lunar invaders' hierarchy, and soon Klein and the other Killibolians are managing vast factories and the requisite Earthling slave labor, building enough firearms and armored vehicles for an army. Nine years after his arrival on Earth, Becmath, like some kind of Caesar, Franco or Mao, returns to his home city of Klittmann at the head of a green-skinned conquering army!  But will his rule be one that fosters peace and prosperity, or one that, like that of so many revolutionaries in Earth's distant past, is more murderous and oppressive than the corrupt elites he is replacing?  Klein, in the final pages of the book, must decide how to react when he learns of Becmath's final solution for Klitmann and all of Killibol.

Empire of Two Worlds is an entertaining science-fiction adventure story, but one which totally lacks any wish fulfillment elements, one which doesn't glorify revolution or imperialism and which does not cater to Victorian morality or liberal sensibilities.  The main characters are drug dealers, murderers, rapists, and torturers, who unlike, say, John Carter, who civilizes Mars when he takes over, murder and exploit everybody who falls under their power.  None of the women in the story are the kind of take-charge kung fu girls who apparently predominate in 21st century SF action movies--the women in Empire of Two Worlds are helpless victims of the callous and cruel empire builders.  Bayley's story is sordid and vulgar: our "heroes" side with the evil invaders of Earth against the pastoral natives, and drug addiction (and not just to the relatively innocuous pot mentioned earlier) plays a major role in the plot and in Becmath's machinations.  This is a SF adventure imbued with elements of a tragic crime drama about low lifes and a cynicism about revolutionary politics.

I found Empire of Two Worlds entertaining, but, as I pointed out before, Joachim Boaz is down on it.  In his blog post of summer 2010 about the novel (which post I put off reading until after drafting my summary and assessment above) he awards the novel only 2 of 5 stars, a "Bad" rating, and complains that the characters are boring and the battle scenes banal.  I actually thought the characters and scenes of violence were pretty good; I enjoy straightforward adventure tales more than does Joachim.  Joachim and I agree that the beginning of the book on the desert planet of hive cities was better than the Earth sequences, and that Bayley has good ideas.  I would also suggest that Bayley does a good job setting the scene--describing various sights and sounds and smells, and describing how the narrator reacts to moving from one weird environment (cramped hive city to vast lifeless waste to fertile Earth to grim Luna and then back again) to the next.  I also appreciate that Bayley seems to be trying to say something about radical politics and imperialism, that men of ambition pursue big projects out of selfish ends despite what they may say about the good of the people and progress.

Moderate recommendation from me, particularly if you like adventure stories, gangster epics and anti-heroes.  Finally, I want to note that Klittmann reminded me of the Warhammer 40,000 setting Necromunda; I also sensed some kind of connection between Bayley and WH40K last time I wrote about Bayley's work. 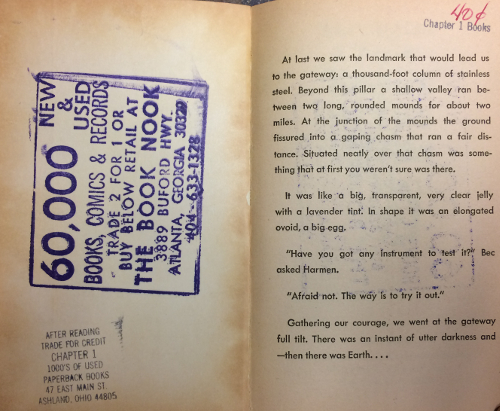 My copy of Empire of Two Worlds has fun stamps on its inside front cover that help chronicle its journey since its printing in 1972.  One indicates it was once in the inventory of the Book Nook of Atlanta, GA.  These is no Book Nook at 3889 Buford Highway in Atlanta today, but there is a Book Nook in nearby Decatur; perhaps the store moved there soon after acquiring Empire of Two Worlds?  Another stamp reveals that my copy of Bayley's book was sold by Chapter 1 of Ashland, OH.  Chapter 1's location now seems to be occupied by a business which caters to hipster booze enthusiasts.  ("Whether you’re new to the world of wine, craft beer or cask ale, we hope to be your friend and guide as we continue on this great adventure!")  Too bad!  I'm sure you can medicate yourself with the swill they sell at the many Kroger and Walmart locations in Ohio, but you can't find 40-year old books about a gangster on a desert planet just anywhere!  Fortunately for us scholars of crime on desert planets, Ohio is home to numerous Half Price Books locations; I bought Empire of Two Worlds at the Lewis Center location, along with five other important volumes.
Posted by MPorcius at 11:05 PM