I think Planet Stories sometimes gets a bad rap, for being "lurid" and "garish" or whatever, but the magazine also has a vigorous defender in no less a figure than Michael Moorcock.  Not only does Moorcock (in the essay "Queen of the Martian Mysteries: An Appreciation of Leigh Brackett") argue that Planet Stories, Thrilling Wonder Stories, and Startling Stories published fiction that was "more vivid and often more lasting" and featured "more idiosyncratic writing [and] more stylish innovation," than the work to be found in Astounding and F&SF, but, less tendentiously, he points out that a long list of major SF writers had their work printed in these pulps.  One such writer is Poul Anderson, three of whose tales from Planet Stories we blogged about last time.  Another is Ray Bradbury.  Today let's read four stories by Bradbury from 1940s issues of Planet Stories, stories which have rarely been reprinted and so might be new to many fans of Bradbury's work.  I am reading all of them from scans of these seventy-odd-year-old magazines available at the internet archive.

The issue of Planet Stories which includes "The Monster Maker" is one we have looked at before, when we read Leigh Brackett's "The Jewel of Bas," and Damon Knight's "The Avenger."  Also noteworthy is the cover by famous horror comics artist Graham Ingels, who did little SF illustration, and an autobiographical sketch by Chad Oliver, at this time of his life a very active SF fan who often showed up in Planet Stories's letters columns.  Oliver here says that SF, for him, is a faith in a better future, and that after the current war is over SF fans must work to create that future.  If the stories of Chad's that I have read over the course of this blog's life are any indication, he gave up on the future and decided the good life was obtainable by abandoning technology and the city and living as a Plains Indian or some other hunter gatherer society.

Ray Bradbury's "The Monster Maker" is a silly adventure story full of obvious joke dialogue, though a more or less serious plot in which, in classic SF fashion, the heroes use high technology and trickery to overcome their enemies and make the solar system a better place.

Two men search an asteroid for a den of space pirates; one is a huge hulking Irish space cop who says stuff like "Me father taught me; keep laughing and you'll have Irish luck," and the other is a cameraman obsessed with movie making--when he fears he is about to die in a space ship crash he asks the Irishman, "Is this where the Big Producer yells CUT!?"

A horde of monsters appears and chases the two men, who take refuge in a cave; when the monsters don't show up on the photographer's quick-developing film, they realize the creatures are just illusions.  They sneak into the pirate's base, get control of the machine that generates the illusions, and trick the pirates into thinking an entire army of Irish space cops has arrived.

An acceptable trifle.  "The Monster Maker" has only ever seen print again in Kent State University's The Collected Stories of Ray Bradbury: A Critical Edition: Volume I: 1938-1943, published in 2011. 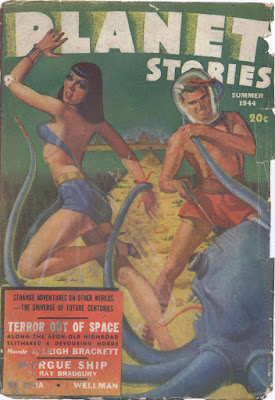 Ray is on the cover of this issue alongside his friend Leigh Brackett.  (We read Brackett's story "Terror Out of Space" in 2014.)

For years war has raged across the Solar System between the space navies of Earth and Venus.  Our two protagonists are the crew of an unarmed Purple Cross morgue rocket--they travel back and forth across the system, picking up the floating corpses and bits and pieces of dead spacemen for return to Earth.  On each trip they collect one hundred remains, and today 97 berths are filled; only three to go.

They spot their 98th cold passenger, or so they think.  It's a Venusian, and when they bring him into the ship they are amazed to find, first, that this guy is the famous righthand man of the Venusian dictator, and, second, he was playing possum and is still alive!  The vessel in which he and the dictator were travelling suffered a catastrophic failure and they have been hoping to trick their way onto just such a working ship as this one.  Gun in hand, the alien orders the unarmed Earthmen to find and pick up the dictator, who is floating nearby.  Will the humans give in or resist--is there a chance they can end the war by capturing the dictator?

This is a good story, with a great premise, a horror/noirish plot and tone, a psychologically interesting main character, good images, and metaphors that work.  "The Monster Maker" was a pedestrian piece of fluff, but "Morgue Ship" is more characteristically Bradburian and a sign of what Bradbury is capable of.  Thumbs up!

I recommend it, but for some reason "Morgue Ship," like "The Monster Maker," has only ever been reprinted in 2011's The Collected Stories of Ray Bradbury: Volume I. 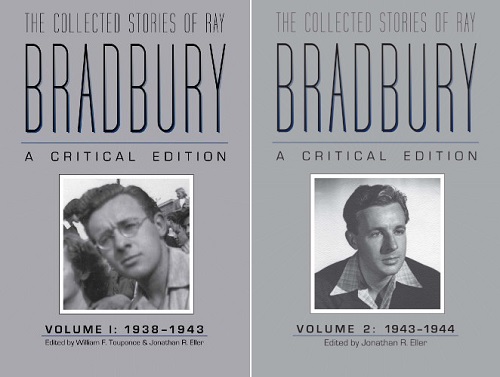 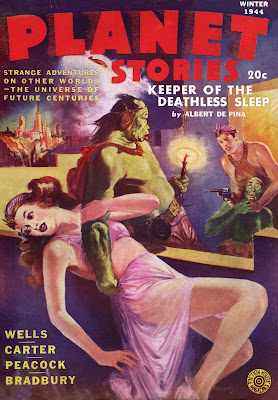 "Lazarus Come Forth" was reprinted in the 1970s in a French anthology and in the 1980s in a Croat magazine, but not in English until 2014 in the second volume of Kent State University's The Collected Stories of Ray Bradbury.  The issue of Planet Stories in which the story made its debut also includes fiction by Damon Knight and Frederick Pohl, both pieces appearing under pseudonyms.

Imagine my surprise when it turns out "Lazarus Come Forth" is also about two guys in a morgue ship crisscrossing the solar system in the wake of an interplanetary naval war, picking up the remains of lost spacemen!  Except this time Earth is at war with Mars!  Why do all these alien freaks make it so hard for us to get along with them?

A more important difference than which extra-terrestrial troublemakers are having their wings clipped by our fly boys this time out is that the two men on this morgue ship do not get along.  At all!  They even come to blows at the start of the story!  Boys!  Boys!  Save it for those red planet rapscallions, why don't ya?

The plot of the story concerns an astonishing coincidence.  The morgue ship finds a body floating out in space, but this one isn't like the scores of others they are always collecting--from its attire it is clear that this corpse died like three centuries ago, and the protagonists can even approximate who this guy was--a member of the secretive coterie of super scientists who had reportedly developed a super weapon but were prevented from mass producing it by a sudden Martian attack.  The body is perfectly preserved, and with the miracles of 25th-century medicine at their disposal, the crew of the morgue ship bring this genius back to life!

One of the men wants to do the obvious thing: ferry this resurrected egghead back to Earth so he can build the super weapon and finish the war with Mars once and for all.  But his comrade is a bigger jerk than any of us ever expected!  He holds his patriotic shipmate at gun point and radios the Martians to sell them the recently revived inventor!  Unbelievable!

Will the sale go through despite the good spaceman's efforts?  Is the Earth doomed?  Will the crooked Earther double cross the Martians, or himself be double crossed?

"Lazarus Come Forth" is like a variation on the themes and elements of "Morgue Ship," and like "Morgue Ship" it is a well-written horror/noir space adventure with a cool premise and an interesting bit of psychology at its center.  Thumbs up! 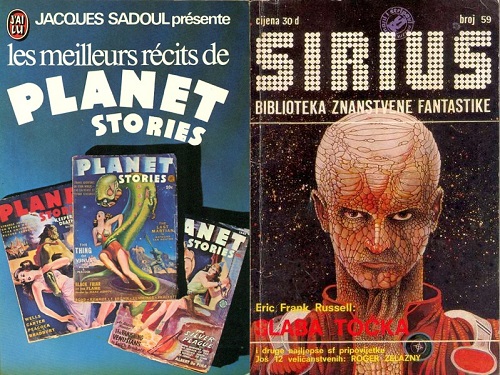 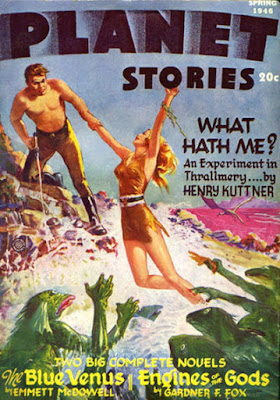 Holy crap! "Defense Mech" is like a Barry Malzberg story, written in the first-person present tense, our narrator a guy stressed out to the point of mental illness, a guy who doesn't get along with his superiors and who can't take the pressure of space travel.  The very first sentence of the story is "Oh my God, do you realize how far from Earth we are?"  Before that paragraph is over he is saying stuff like "Give me sedatives or hold my hand or run call mama," and before the first page (of this approximately six-page story) is over he has enraged the captain and driven the expedition's psychiatrist to extreme measures.

Our poor narrator is on a fourteen-man mission to Mars.  The captain needs every man to pull his weight on the red planet to get the job done, but our boy is going berserk with fear as the rocket approaches Mars, so the expedition's shrink hypnotizes him into thinking they are returning to Earth.  It is a Malzbergian moment when the psychiatrist admits that lying to a patient goes "against all the known ethics of my profession" but blithely does it anyway.  Once on the Martian surface Bradbury unleashes a stream of pretty good jokes on us; for example, the narrator is convinced that his space suit is his baseball uniform, and when a carnivorous Martian worm with teeth like a shark's attacks him he thinks it is his old dog Shep gone rabid.  Bradbury keeps this up all the way through, with hostile natives attacking and capturing the astronauts and throwing them into the arena, from which the narrator extricates them, the whole time thinking he's in New York, dodging automobiles and fighting police and street punks.

Plenty of fun--thumbs up!  "Defense Mech" appears in an issue of Planet Stories which features stories by MPorcius fave Henry Kuttner and DC comics stalwart Gardner Fox, and has only ever been reprinted in the third volume of Kent State University Press's The Collected Stories of Ray Bradbury. 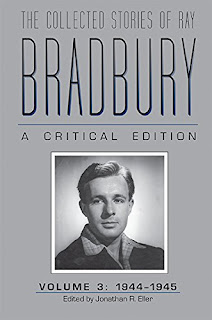 It is hardly breaking news that Ray Bradbury is a superior writer, but I can do nothing else but report the dog-bites-man story that these four 1940s stories by the 1989 SFWA Grand Master are worth your time.  I can strongly recommend "Morgue Ship," "Lazarus Come Forth," and "Defense Mech" to space opera and adventure SF fans as fun and exciting unjustly neglected gems of outer space fear and violence.  If you have money, invest in the The Collected Stories of Ray Bradbury, and if you don't have money, join me at the internet archive where you can enjoy these tales of death and insanity-laden rocket ships.
Posted by MPorcius at 10:45 AM