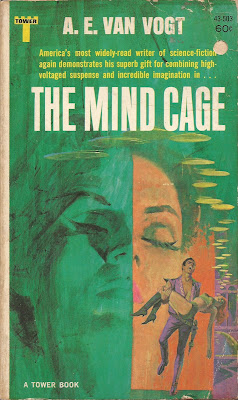 A week or so ago, at Wonder Book in Hagerstown, MD (a store I recommend to all classic SF fans), I found myself in the presence of four different editions of A. E. van Vogt's The Mind Cage.  Spurred by this encounter, I decided to read the 1957 novel, an expansion of a 1948 story, "The Great Judge," but I had no need to buy any of the copies I saw there in Hagerstown, because I already owned yet a different edition of the oft-reprinted book, the 1965 printing by Tower.

The year is 2140, a little over twenty years after the Third Atomic War.  That devastating world-wide conflagration swept away existing political entities, and in their place arose a bewildering array of 1000 states.  The most powerful of these states is that ruled by Ivan Prokov, the man known as the Great Judge, and his government has been steadily conquering the smaller and weaker countries, ostensibly to create a one-world government which will render war impossible; in the current year only a hundred of the lesser nations survive.  The protagonist of The Mind Cage has played a leading role in the absorption of all those small countries; he is General David Marin, veteran of many battles and much intrigue, the head of the Great Judge's military forces, a diplomat and member of the ruling council.  For years he has been in command of the operations that have expanded the Great Judge's empire, and Marin is a master not only of military tactics and strategy but of exploiting divisions within nations, of empowering local pro-Great Judge rebels and fomenting revolutions that deliver states right into the Great Judge's hands.

The Great Judge's society is organized under an ideology that "combines group living with free enterprise."  One of van Vogt's narrative strategies is keeping us readers in the dark and then successively springing new information on us; sometimes we share Marin's surprise as he learns something new about his associates or the history of the Great Judge's carefully crafted authoritarian society, but other times van Vogt casually informs us of things that are common knowledge in Marin's world but which have been kept from us, forcing us to revaluate our view of what is going on and what kind of people the characters are and why they are doing what they do. 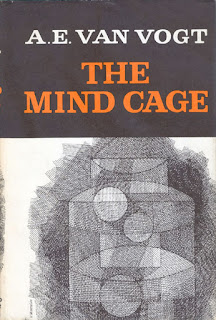 So, when we first hear the phrase "the group-free-enterprise idea" we have little notion of what this means, but as the novel progresses additional puzzle pieces fall into place and we get a picture of this strange and terrible society, in which the traditional family, purportedly for feminist and eugenic reasons, is being stamped out and replaced with a system in which only the thirty percent of men who can excel in athletic competitions ("the mating games") have the right to procreative sex, and fathers never again see their mates or their children, who are raised partly by their mothers and partly during periods of mandatory attendance in government facilities.
The capital city of the Great Judge's empire is an symmetrical ultramodern series of blocks, each block an outer ring of skyscrapers surrounding a green park, designed to contain a nuclear blast within it should another atomic war erupt.  Each block is home to a self-contained "Group" with its own little ruling council.  Beyond this model of urban efficiency and beauty sprawl the smoky suburbs where reside and toil this society's working class, the mutants who are forbidden, on pain of death, from leaving their reservations.  Reflecting the novel's themes of hidden pasts, unknown origins and mysterious identities, the mutants bear physical resemblance to more primitive lifeforms, like scaly skin or animal life faces, and have dream-like racial memories of prehistoric life.  The mutants have a reputation for violence and treachery, but the Great Judge himself lives among them in a mansion in these suburbs, with a personal bodyguard and staff of servants made up entirely of mutants.

One source of interest and tension in the narrative is the fact that Marin is a loyal supporter of the Great Judge and his policies and goals; Marin has no compunction about murdering and torturing people for the government and van Vogt describes the revolutionary changes wrought and the atrocious crimes committed by the Great Judge's government in a way that is matter of fact rather than a condemnatory or broadly satirical, while at the same time providing plenty of examples of the corruption and hypocrisy of the ruling council and of human nature recoiling at the way the Great Judge's social policy destroys what mid-century English language readers would consider ordinary family life.  Rather than telling readers what to think or simply endorsing their preconceived ideas, van Vogt seems to be challenging readers to consider how many of their traditional liberties they would be willing to sacrifice in return for a guarantee of safety from international war in a nuclear-armed world.

The plot of The Mind Cage follows the many twists and turns in Marin's life over the course of a week as events unfold that shake the Great Judge's empire to its core, revealing its true origins and nature and introducing a radical paradigm shift.  The ball gets rolling when leading scientist Wade Trask, whose inventions have been very useful to the government and Marin's campaigns of conquest in particular, has been found to have uttered seditious statements and is sentenced to death.  (One of the first things we learn about the Great Judge's society is that there is no respect for free speech!)  When Marin counsels leniency. he arouses the suspicions of the Great Judge and his colleagues on the ruling council.  And when he goes to see Trask to give him the bad news, Trask pulls a fast one on Marin, using his latest, secret invention to swap bodies with the general.  Now it is Marin who has only a week to live! 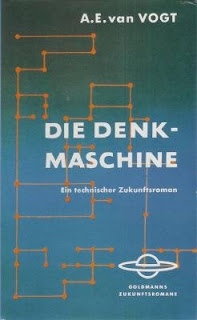 All citizens of the Great Judge's empire have a "pain circuit" imbedded in their flesh.  At the security service's HQ is a transmitter so the secret police can just dial up your circuit and inflict upon you a pain that will gradually increase/  Convicted political criminals like Trask are free to move about the city to say their good-byes and settle their affairs for one week (in fact, Trask's Group leaders send over a prostitute to comfort him in his last days), but after that week, if a condemned man hasn't shown up to the executioner as scheduled, the pain will start and get steadily worse.  So Marin, in Trask's body, only has a week to sort things out.

For most of the novel's 245 pages Marin is running to and fro, living out both his own life (a high-tech disguise allows Trask's body to pass for Marin's) and Trask's life (after Trask in Marin's body gets temporarily incapacitated.)  He pursues his own duties as leader of the Great Judge's diplomatic and military efforts to take over the Kingdom of Jorgia (the successor state to the Soviet Socialist Republic of Georgia and the birthplace of the Great Judge, I suppose van Vogt urging us to think of the Great Judge as Stalin) and in his off-time tries to figure out how to get back in his own body or at least avoid execution.  In the process he learns about the rumored supercomputer known as "the Brain" that may or may not have been destroyed during the Third Atomic War, a machine which, if it indeed survived the war, may be the Great Judge's harried enemy, hiding in the vast fallout shelters beneath the city, or actually the grey eminence behind the Great Judge and the true architect and ruler of his totalitarian empire.

What with all the body-switching, disguises, people alienated from their origins or concealing their origins, people under the control of others and people pretending to serve one master but in fact serving another, a major theme of The Mind Cage is identity and the roles we play--how we present ourselves to others, what place we have in our community and whether we choose to embrace that role, sullenly inhabit it, or rebel against it.  All the characters are inauthentic in one or more ways--deceiving others, deceived by others, stifling their true feelings--and are denied the opportunity, by the government or by themselves, to be themselves or even know who they really are.

I liked the way van Vogt handled all the themes I've been talking about, and there are lots of high tech devices and weird images and wacky theories (for example, we again find van Vogt expounding alternative theories about poor eyesight, as we saw in "The Chronicler" AKA "Siege of the Unseen" AKA "Three Eyes of Evil") that I found entertaining.  So I am giving The Mind Cage a thumbs up.  But I have to warn you normies out there that The Mind Cage has many of the characteristics of van Vogt's body of work, and perhaps of classic SF in general, that people find off-putting.  The meat of the book is ideas, not characters you can identify with or even like, values you can comfortably endorse, emotional catharsis or skillful wordsmithing; the plot can be confusing, and the protagonist resolves it via trickery and technology.  There is lots of psychology stuff and several action scenes, but it is all related in a detached, clinical, bland fashion, not in a way that will move or thrill a reader.  The Mind Cage is not for everybody, but if you are a van Vogt fan, as I am, this is a decent one. 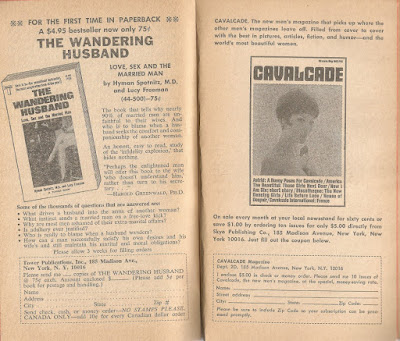 At the back of my copy of The Mind Cage (Tower 43-503, 60¢) are two pages of ads, but they are not for SF books; instead they are for a sex book, The Wandering Husband by Dr. Hyman Spotnitz and a men's magazine, Cavalcade.  You'll be happy to hear that you can read both The Wandering Husband and four or five different (NSFW) 1960s issues of Cavalcade at the internet archive.  Hubba hubba. 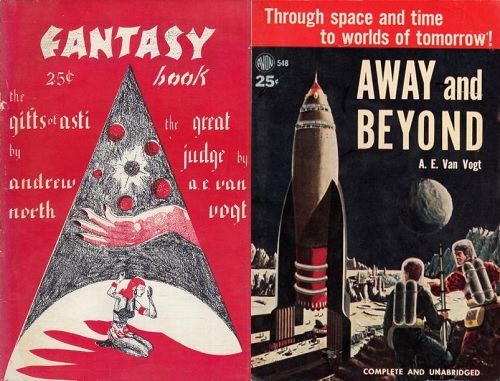 Curious, I read the 1948 short story that was the basis for The Mind Cage, "The Great Judge," which first appeared in Fantasy Book.  Just four pages, it is a fun vignette that addresses none of the issues of the novel and is instead focused on conventional thrills.  A scientist is going to be executed for expressing mild criticism of the Great Judge's rule, but he uses his new mind-switching device to shift his consciousness from his own body to that of an investigator that comes by, and then switches his mind from that investigator to the body of the Great Judge himself.  As Great Judge the scientist plans to, with deliberate speed, reform this police state into a free state.  The final paragraphs pf the story amusingly describe the efforts of the great Judge, now in the scientist's body, to escape execution.  A fun little story.

"The Great Judge" would be reprinted numerous times, including in the van Vogt collection Away and Beyond and multiple anthologies with Isaac Asimov's name on the cover above those of such people as Groff Conklin, Martin H. Greenberg and Joseph D. Olander. 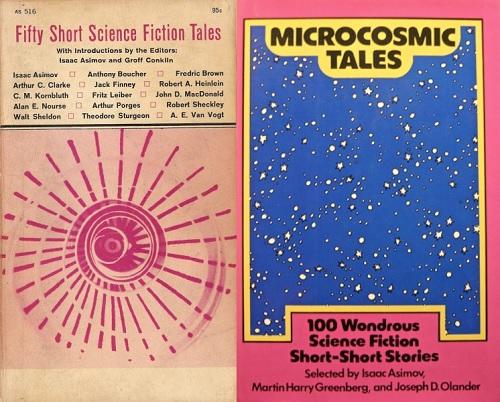