In the last installment of MPorcius Fiction Log we read a novel and a short story by A. E. van Vogt I'd never read before.  Looking over the catalog of the Canadian madman's prodigious body of work over at isfdb, a number of titles came to my attention that I have not read since this blog was brought forth upon this continent, conceived in error and dedicated to the dubious proposition that I should keep track of the fiction I read and record my opinions of it.  Let's read three of them that first appeared in Astounding in the 1940s. 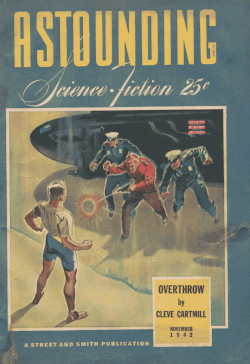 This is a pretty straightforward old-fashioned SF tale with aliens, violence, trickery, engineering, and a sense of wonder ending.

A whaling ship is cruising the Northern Pacific when the crew spots what at first is believed to be an Axis submarine but which turns out to be an alien space ship!  When reptilian aliens with six libs emerge, the whalers shoot at them with the weapons they have been issued by the US government, a three-inch deck gun and several machine guns.  The aliens are impervious to this fire, and luckily they are not hostile, though they do act mysteriously, repeatedly boarding the whaler and then leaving hastily.

The first part of "Not Only Dead Men" is written essentially from the whalers' point of view, but in a brief second part we watch the aliens and all is explained.  This alien ship was attacked by a space monster, and in the fight the ship and the monster were both crippled and forced to splash down on Earth.  The monster is no doubt homing in on the ship, and the space crew won't have the vessel's high tech energy weapons repaired in time to fight it off.  When they took a look at the Terran whaler the stranded spacefarers realized they could quickly replicate its harpoon gun, and even upgrade the one on the Earth whaler and manipulate the humans into helping them fight off the hundred-foot long space monster.

The lizard people's scheme is a success; fighting together, human and alien vanquish the huge monster.  Then comes the twist and sense-of-wonder ending.  Galactic law states that planetary civilizations as primitive as ours cannot be allowed to learn of Galactic civilization.  So the crew of the whaler are put to sleep with gas and brought aboard the space ship to be settled in the Wodesk system.  Human beings are actually not native to Earth--we are the descendants of a lost Wodesk colony, so the whalers will be comfortable in the Wodesk system, and because (as we learned early in the story) the whalers have little connection to ordinary society ashore, this trip across the galaxy to an alien world is not going to be a sad exile but a tremendous adventure and an improvement in their lives.

A pleasant little story.  "Not Only Dead Men" has been reprinted in several anthologies as well as in the van Vogt collection Monsters, which has been reissued many times in several languages. 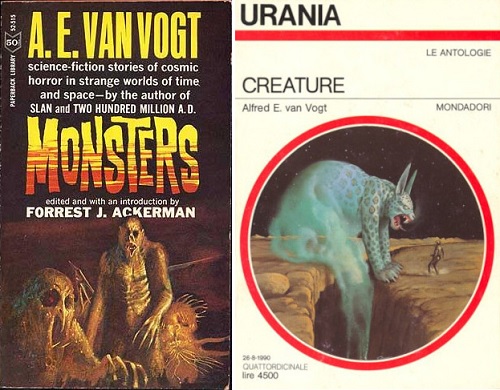 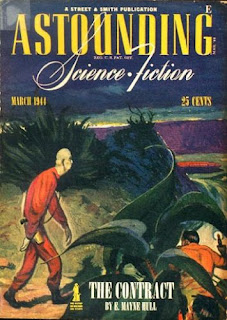 "The Rulers" has not been anthologized in English, it appears, but was included in some foreign publications and in the many printings of the van Vogt collection Destination Universe!  For this blog post I read the story in my crumbling paperback edition of Destination: Universe!, Berkley Medallion N2814, which has a price tag of 95¢ and a black and red cover by Richard Powers.

Writing during World War II, van Vogt depicts a postwar world of high technology (air cars, public video phones) and amazing scientific techniques.  "The Rulers" has a frame story that takes place at a Washington D.C. dinner party, at which Dr. Latham, a "psychomedician," tells the story of a recent adventure in which he foiled an international cabal that had taken over an American city by feeding an hypnotic drug into the water supply.

As a top psychomedician with excellent eyesight, Dr. Latham can discern an individual's changing moods and feelings just by observing the way the muscles in his face move and the subtle changes of color in his skin--Latham can practically read your mind just by looking at you!  These skills are one reason he was chosen by Congress and the president to participate in an investigation of rumors that U. S. hospitals that cater to international patients were being used by hostile foreign agents as a base for some major operation.  Latham was given the task of investigating a hospital in some unnamed American city.

The main text of "The Rulers" describes Latham's ordeal as he, and his beautiful blonde assistant, whom he later married, are pursued and then captured by the thirteen men of the aforementioned cabal, a tale featuring air car chases, ruthless hand to hand combat, and demonstrations of Latham's "mind-reading" abilities as well as the cabal's ability to control the mind of almost everybody in the city.  While I mentioned the cabal and the hypnosis drug in the very start of my summary, van Vogt endeavors to disorient and surprise the reader by showing the effects of this terrible reality first and then gradually revealing the truth to readers.

An acceptable entertainment, with characteristic van Vogtian themes of psychology and intellectual/mental powers.  Perhaps noteworthy is how patriotic the story is, the good things it says and implies about the people and governments of the United States and Great Britain, I suppose a reflection of wartime attitudes.  For example, the mind-blowing ending of the story has Latham's captors telling him that their cabal has existed since 3417 B.C. (that's B. C. E. to all you kids out there) and that for centuries all the big political developments and wars and so forth were the result of their manipulations.  But since the 18th century Great Britain and then the United States have been independent of them and stood in the way of their plans, and this is why the cabal has targeted this American city and now hopes to hypnotize Latham so that when he gets back to D. C. he will inject federal officials with the drug and render them, and all the U.S. government, pawns of the cabal. 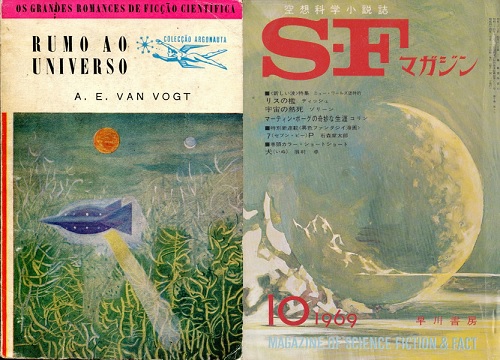 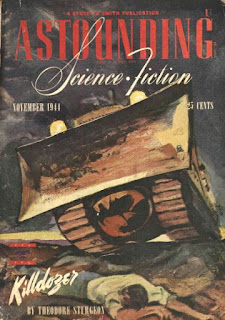 "The Harmonizer" made its debut in the same issue of Astounding that saw first publication of Theodore Sturgeon's "Killdozer" and Henry Kuttner and C. L. Moore's "When the Bough Breaks," classic stories I wrote about when this blog was just knee-high to a grasshopper.  I particularly recommend "When the Bough Breaks," which addresses favorite MPorcius themes, like difficult and demeaning family relationships and how people with superior abilities tend to use those abilities to exploit and oppress others.

The opening section of the story describes how a plant in the garden of a soldier who is leaving for the front tomorrow first sends shoots above the surface.  Van Vogt describes the growth of the psychic intelligent plant, which can mimic other plants in order to escape notice.

Then, flashback to the age of dinosaurs!  An alien space ship, a mile long, crashes on the Earth.  All the people on the ship die, but some of the plants on it survive and thrive in the Cretaceous soil.  They grow and multiply.  Then one day a Tyrannosaurus Rex kills a brontosaur nearby.  The plants hate violence, and van Vogt dwells on the brontosaur's agony and wounds and on how the psychic plants are affected by the "blasts" of powerful "thought waves" of "palpable lust" emanating from the brain of the carnivore.  (Van Vogt not quite convincingly suggests that the plants don't mind snakes eating fish or lizards eating bugs because these tiny creatures don't have as complex minds or feelings as sauropods and therapods.)  In response to this dinosaur-on-dinosaur violence, the plants send out spores that, when breathed in by the tyrannosaur, cause it to eschew violence and starve to death. 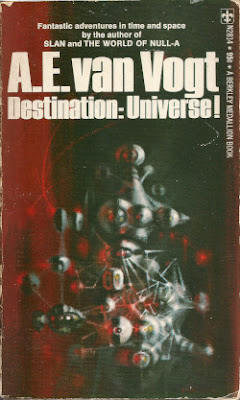 Thousands of years pass, and another alien ship arrives to retrieve the wreckage of the crashed liner and remove all the alien plants.  However, one plant has been covered up by seismic activity and is left behind by the aliens.

In the last brief section of the story we find the soldier returning home from the front to find his house has been bombed--it's revealed he is a German and he curses the Americans who wrecked his home.  The plant detects his blood lust and releases the pacifying spores, and--sense of wonder ending--we are told soon the entire human race will become peaceful thanks to the spreading of the spores throughout the world.

While I was reading "The Harmonizer" I found the descriptions of plant biology in action a bit tedious, but the aliens and the dino violence are fun (like so much ostensibly anti-war or anti-violence fiction from Homer to this day, "The Harmonizer" revels in entertaining depictions of bloody fighting) and looking back on it the whole idea of the thing is pretty audacious and memorable.  Mildly good, and perhaps of special interest to students of depictions of dinosaurs in popular culture.  (After eating the brontosaur, Tyrannosaurus Rex goes to sleep in a mudhole and farts and shits while it sleeps, which I found a surprising detail for our man Van to throw in there, I guess part of his project of making us feel some of the disgust with the violent carnivore felt by the alien plant.)

"The Harmonizer" was included in Away and Beyond, a van Vogt collection I do not own, but has not been widely anthologized--the only reprinting listed at isfdb apart from those in van Vogt collections is in a 1966 German magazine.  Did the editor of Die galaktische Prüfung und andere SF-Storys gravitate to "The Harmonizer" because of the Germano-centric twist ending? 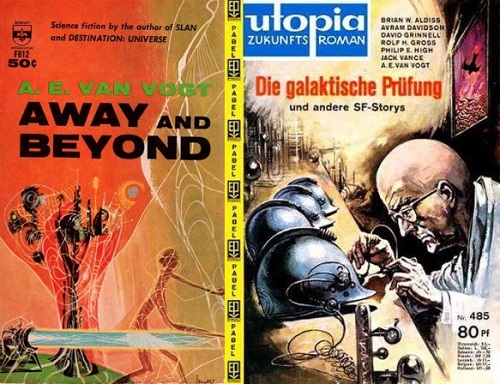 Three decent stories from our favorite Canadian that reflect in interesting way their composition during the Second World War and include all kinds of traditional SF elements: aliens, dinosaurs, sentient plants, conspiracies, terrible fighting and paradigm shifts that change utterly and almost unimaginably the lives of individuals or the entire human race.  Worth the time of the Golden Age SF fan.