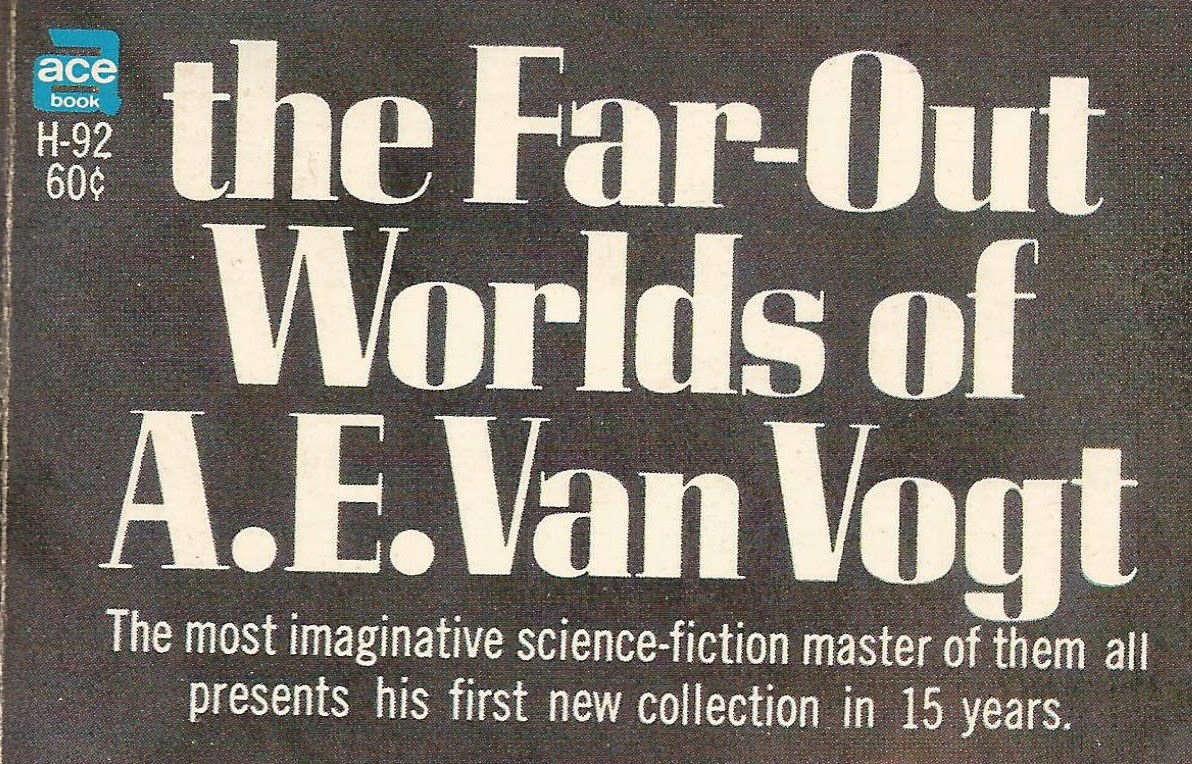 Let's return to my 1968 Ace paperback of The Far-Out Worlds of A. E. Van Vogt.  In this episode we'll look at some quite short stories by Van Vogt.  "Itself!" takes up just two pages, "Process" is merely six, and "Not the First" is thirteen.  Can Van Vogt produce stories that are both good and far-out at this length?

To my amazement, this story appeared in the January 1962 issue of Scientific American, alongside articles like "Two-Phase Materials," "The Fine Structure of the Gene," and "Aftereffects in Perception."  But when I went to the august website of Scientific American I found no references to my man Van.  Hmmm... the mystery is explicated at the icshi.net site.  Van Vogt, as well as Robert Heinlein, Isaac Asimov, Fritz Leiber, and Frank Riley, sneaked into the pages of Scientific American when they were hired by Hoffman Electronics Corporation to pen short short stories to be placed in the firm's two-page ads.  (The advertisements have the theme "we are turning science fiction into reality!") 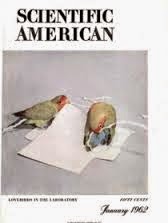 "Itself!" is about a self aware, apparently self-directed submarine that protects the Pacific from space aliens who seek to hide in the ocean depths prior to nuking us into oblivion.  This story is short, but Van Vogt packs it with futuristic weapons and even some laughs.  It seems that the ship's computer has not only been programmed to act like a territorial animal, it also has a subroutine or a secondary computer that eggs it on, working on its machismo to get it to do its job.  When an alien ship approaches, this voice, called by Van Vogt, "The Alter Ego," nags "You're not going to let somebody invade your territory, are you?"  When the aliens score a hit on Itself, the Alter Ego says, "You're not going to let them get away with that, are you?"  Somehow I found this very amusing.

The story suits the ad because Hoffman built a superior periscope for U. S. Navy submarines.  The Hoffman ad also indicates that they built some kind of model or novelty item based on the story, but they provide limited details about this item.

This is an odd story, and seems to have caught people's attention when it first appeared in The Magazine of Fantasy and Science Fiction. It later appeared in some "Best of" anthologies and was the basis of a cover story in Andromeda, a Canadian comic book.

The main character of "Process" is a sentient forest.  The forest goes to war with adjacent forests, and is tricked by the crew of a space ship into mining uranium 235 for them. There is not much more to it than that, but the unusual topic and point of view, the striking images, and the effective pacing make it compelling and entertaining, and the prose is better than average for Van Vogt.

"Not the First" was published in Astounding, and is one of those old-timey SF stories that is actually about science and engineering, with a little psychology thrown in.

Captain Harcourt is in command of the first spaceship able to achieve a speed greater than that of light, thanks to its advanced atomic engine.  But when the ship exceeds that speed, some "reaction of atomic energy on the fabric of space" drains the ship's electric batteries, leaving the ship with no electricity.  Even worse, the ship starts to accelerate at an incredible rate--soon the ship is traveling at a speed "a billion times that of light."  Sol is so far behind that it is virtually impossible for the crew to ever find it again.  And what's that?  We're flying directly into a star and will be burned up in less than an hour?

Most of the story consists of the science and engineering types trying to figure out how that disaster occurred, and how to get out of this pickle.  We also witness the captain using various psychological techniques to manage the crew, fostering conditions conducive to them coming up with ideas as fast as possible.  The door to the engine room is run by electricity, so the crew builds a steam engine out of whatever is laying around ("parts ripped out of great packing cases") to get the raw physical power needed to force the door open.  (They use uranium 235 to boil the water.)  Just before the ship flies into the star they manage to throttle down the engine.

But "atomic energy had created an initial tension in space, and somehow space demanded an inexorable recompense."  This means that, for the ship and its ill-fated inhabitants, time goes into reverse.  Van Vogt provides descriptions of people walking backwards, talking backwards, booze leaving their stomachs to fill the glasses raised to their mouths, etc.  Events in the ship rewind to the point when the ship broke the light barrier, and then goes forward again, and the same exact events occur.  The crew is doomed to live this disaster again and again, an infinite number of times.

I didn't find the physics of "Not the First" very convincing or even understandable, but the science on "America's Test Kitchen" taxes my little brain, so we should maybe put that aside.  I also found the ending a little disappointing, though I don't have any ideas of my own on how to get the crew out of the predicament the author has placed them in.  On the plus side, Van Vogt does a good job conveying the tension felt by the crew of the doomed ship.  I think this one deserves a passing grade.

These stories were pretty good, and pretty weird.  "Process" in particular is the kind of SF story that should appeal to SF fans who don't care for van Vogt's usual insane plots, obsession with psychology and mental powers, and convoluted syntax.

Only one more episode of this thrilling series to go!  How will "Fulfillment," "Ship of Darkness," and "The Ultra Man" stack up against those stories that came before?  Stay tuned to this ultra channel to find out!
Posted by MPorcius at 9:50 PM