"Raider of the Spaceways" and "Avengers of Space" by Henry Kuttner 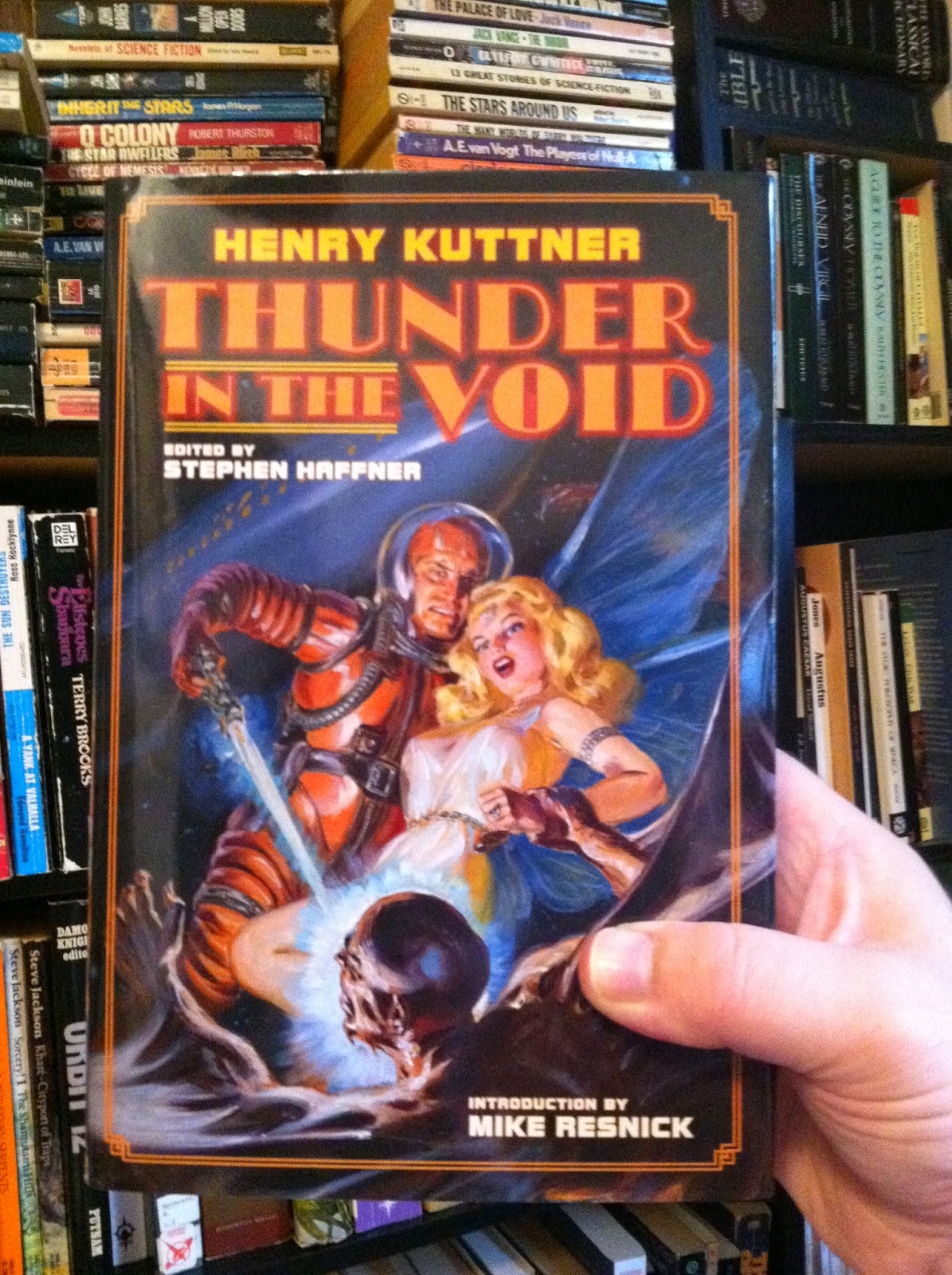 I recently sold my first edition of Gods in Darkness, an omnibus of Karl Edward Wagner's three Kane novels published by Night Shade Books, on ebay.  A man with any sense, in my financial position, would have spent the profits at the grocery store, but I spent some of my loot at Amazon.com on Haffner Press's 2011 Thunder in the Void, a 600-page hardcover collection of sixteen space operas by Henry Kuttner.  This week I read the first two included stories, "Raider of the Spaceways" and "Avengers of Space."

This 30-page adventure was published in Weird Tales, and was out of print until 2011 when Thunder in the Void was released.

Dal Kenworth is son of the "President of the Americas," but instead of raking in the dough at a bogus video journalist job or a charitable foundation sinecure he's on Venus, raising elysia plants.  That is until a space pirate hijacks the ship that transports the elysia goop back to Earth! 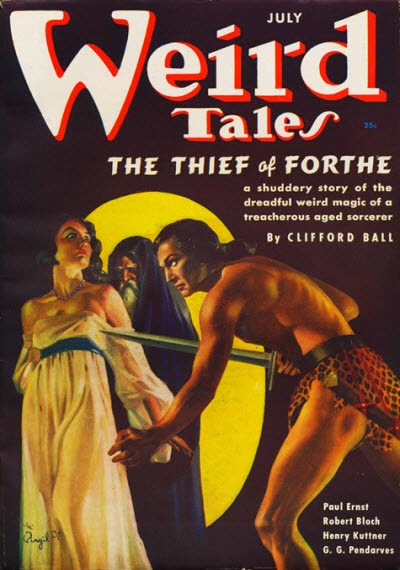 Kenworth and his girlfriend, Thona Thorton, are captured by the pirates, but not before Kenworth can send out an SOS to the Interplanetary Patrol.  The pirates decide to hide on the dark side of Venus, even though no space ship has ever returned from this mysterious region.  During a fierce dogfight with a patrol vessel Kenworth and Thorton seize parachutes and escape to the surface, where they have to deal with various native menaces.  In the end our heroes survive while the pirates meet a horrendous fate!

This is a really fun story.  In its short length Kuttner manages to introduce you to an interesting milieu, four memorable types of aliens (two types of Martians who are part of the pirate crew and two types of Venerians), and various interesting pieces of technology and space combat techniques.  Everything in the tale is vivid and easily visualized, and Kuttner holds your attention and doesn't resort to long science lectures or extravagant descriptive passages.  The plot is exciting and makes sense.

"Avengers of Space" appeared in Marvel Science Stories, and years later caught the fancy of Mike Resnick, who included it in a Kuttner-centric anthology in 1997 called Girls for the Slime God.  In the introduction of Thunder in the Void, Resnick relates how he and his wife dressed up as characters from "Avengers of Space" at a science fiction convention in 1979 and won a prize.

Twice as long as "Raider of the Spaceways," "Avengers of Space" is also not as tight as that earlier story, being full of crazy coincidences, overwrought descriptions, and episodes that don't necessarily move the plot forward.  It has its high points, and I enjoyed it, but it is a step down from "Raiders" and I think Resnick and his wife may have enjoyed it somewhat "ironically."

Terry Shawn and his friends have just finished building the first space ship on Earth, The Eagle, a sphere that uses anti-gravity to propel itself.  (Sounds a little like H. G. Wells's First Men in the Moon, doesn't it?)  A squad of thugs from an unscrupulous corporation, International Power, drive up to the launch site to try to steal the ship, forcing Shawn and company to lift off precipitously.  In the confusion a beautiful female journalist, Lorna Rand, boards the ship and accompanies the men into space.

"Avengers of Space" is surprisingly salacious, and again and again throughout the story we hear about Rand's "ivory, softly rounded thighs" and "the pale cones of her breasts."  Shawn falls in love with her at first sight, and often stares at her.  In the gun battle between the scientists and the International Power brutes Rand's dress is torn by broken glass, and, similarly, several times over the course of her outer space odyssey she finds herself fighting or fleeing for her life while naked, monsters having clawed off her clothes or she having tried to distract pursuing creatures with her castoff attire.  At one point poor Rand is enslaved by aliens who bind her with cords that painfully mark her skin and then whip her naked flesh. 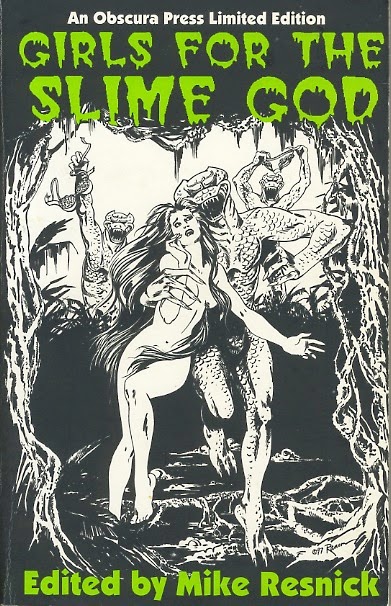 Almost immediately after The Eagle leaves Earth a fleet of golden torpedo-shaped spaceships appears and the Earth vanishes, apparently destroyed.  (This is a total coincidence, the golden fleet is not acting in response to The Eagle, which they don't even notice.)  Shawn and crew chase the golden fleet, but it outstrips them, and the last Earthlings search the system for them.  On Mars and then Titan they battle primitive natives, getting captured and being forced to fight in an arena or offered up for sacrifice, as often happens to people in these kinds of stories.  These aliens are not as interesting or original as the aliens in "Raider of the Spaceways."

Eventually the Earth people meet the arcane inhabitants of the asteroid belt, crystals who live lives of pure thought, with no need to eat or reproduce.  One of the crystals explains the reality of the golden fleet: these aliens come from another dimension, an old dimension where all the suns have burnt out, looking for a place to conquer.  They have not destroyed the Earth, just frozen it in stasis in a different universe.  The crystal does Shawn, Rand, and the entire human race a solid (as the kids say), exterminating the extradimensional interlopers and thawing the Earth, giving us a happy ending.

I can recommend "Avengers of Space," but not as enthusiastically as "Raider of the Spaceways."

I'm pleased with Thunder in the Void so far.  Hopefully the rest of the stories can reach the bar set by these two.