Far-out tales by A. E. Van Vogt: "Fulfillment," "Ship of Darkness" and "The Ultra Man"

This will be our last episode exploring the 1968 collection The Far-Out Worlds of A. E. Van Vogt.  I've liked the stories so far; let's hope the last three selections don't let us down.

"Fulfillment" was published originally in a hardcover anthology of new stories, New Tales of Space and Time.  It seems to have been well-received; Brian Aldiss and Isaac Asimov both included it in anthologies they edited, Aldiss in the '60s and Asimov in the '80s. 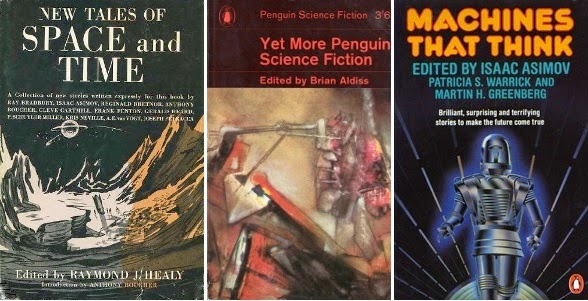 This story is a first person narrative told in the voice of a super computer that has achieved self-awareness.  At the start of the tale, the computer sits on a hill in the far future, on a desolate Earth bereft of people and even atmosphere.  An opportunity to travel back in time presents itself, and the computer explores the twentieth century.  It has a battle of wits with another computer (Van Vogt readers will perhaps not be surprised that this other computer is, in fact, its own younger self), meets its creator, and solves the mystery of what happened to the Earth's atmosphere and population.

"Fulfillment" has a philosophical point to make.  At the beginning of the story the computer is selfish and merciless, and also dissatisfied, living a life without meaning, wondering what its purpose could be.  At the end of the story it finds satisfaction in working in partnership with others, putting its abilities to use for the good of a community.  There may be a note of tragedy, though; we know that after helping humanity achieve the stars and immortality, that the computer will be abandoned on the dead Earth.

ISFDB is telling me that Fantasy Book, where "Ship of Darkness" first appeared, was printed in both a standard edition on pulp and a deluxe edition on higher quality paper, and that each edition had its own cover.  "Ship of Darkness" was also the cover story for the February 1961 issue of Fantastic Stories of Imagination.

Dispensing with any kind of realism, this is a sort of dream story.  D'Ormond lives some centuries in our future, in a time when interstellar travel is common.  He wants to test a time machine, and to do so must be very far from any planet, so he spends six months, all alone, flying out of and away from the Milky Way galaxy.  When the galaxy is far behind he sets the time machine for 3 million AD and activates it.

The time machine vanishes, and D'Ormond spots a bizarre space ship, a flat platform just a foot thick, but two miles long and a mile wide.  Naked people are walking on the platform, and using mental powers or something they get D'Ormond onto the platform and out of his little ship.

There's a lot of rigmarole with D'Ormond trying to figure out what is going on on the platform, trying to communicate with the people, etc.  He thinks the people on the platform are from the future and are spectacularly advanced, through evolution and/or some kind of high technology.  There is some New Age gobbledygook about men being anodal powers and women being nodal powers, and when a  similar, rival, platform appears the men sit cross legged and the women kneel, and they hold hands to generate power.  D'Ormond's platform generates more power and defeats the other platform, and the naked people become one with the universe. D'Ormond and one woman, who like him has clothes and was on some kind of probation, are left alone.

The two get in D'Ormond's space ship.  Looking at the stars, he realizes that his malfunctioning time machine sent him back in time instead of forwards.  (Greddar Klon feels your pain, D'Ormond!)  He spends months teaching the woman to speak; she pronounces his name "Idorm," and when they finally reach the unpopulated but fertile virgin Earth he has taken to calling her Eve.

To my mind this is the worst story in the collection.  Of course the Adam and Eve ending is groanworthy.  But the entire story offers little of interest--no character, no tension, no excitement, no speculations about technology or life in the future, no philosophical point of view.  I guess the story is meant to blow your mind with its crazy images and ideas ("whoa dude, this guy is his own ancestor!") but it is so unmoored from reality that it has no effect; it is like listening to somebody's surreal dream.  "Ship of Darkness" is a sterile exercise.  I've gotta give this one a thumbs down.

This is the kind of crazy, convoluted story in which a man attains tremendous mental powers that Van Vogt is famous for, and a good piece to end the book on.  "The Ultra Man" first appeared in Worlds of Tomorrow. 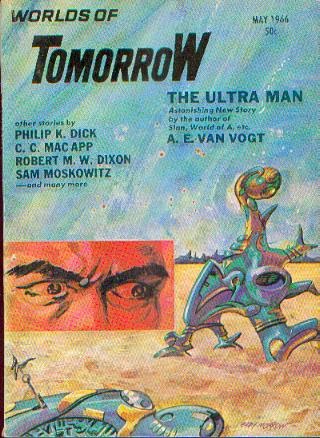 The story takes place early in the history of human space flight. There is a multinational moon colony, and our main characters are the head of security, an Englishman named Wentworth, an American psychologist named Carr, and a Soviet psychologist, Denovich. Wentworth has noticed that a small but significant number of people who come to the moon suddenly develop terrific ESP powers.  These powers persist for two days, then go away, then return in a different and more powerful form for a brief period.  Carr is one such person, and while testing his novel mental ability he, by chance, uncovers an alien spy who has infiltrated the moon colony!

The alien, Xilmer, has disguised himself as a black African Muslim.  He has a communications device and a powerful ray gun hidden in his turban!  He is observing the humans on the moon colony, sending messages back to a space battleship twenty miles long!  These aliens plan to conquer the human race, and Xilmer is assessing our defensive capabilities.

Wentworth tries to catch the alien spy with the help of Carr's new powers.  Denovich, called in to help Carr deal with his new powers, instead uses a sleep drug oncarr so he can steal Carr's notes and send them home to the KGB.  Xilmer tries to dispose of Carr, but Carr's mental powers reach that second level just in time and he blows Xilmer away.  Xilmer's turban is not destroyed, and the captain of the alien battleship and Wentworth conduct negotiations through the turban as it lies on the floor in a pool of Xilmer's blue blood.

Carr's (temporary) super mental powers allow him to see the connections between things in the universe.  He can look at a person and see threads travelling from the person to every person he has interacted with, every place he has been.  He can also cut these threads, which has various effects.  He drives Denovich insane by cutting the threads linking Denovich to the woman he impregnated years ago; she died in childbirth and Carr's cutting those threads inflicts upon Denovich soul-crushing guilt. Then Carr teleports to the alien battleship, survives attack by a vast battery of energy weapons, and cuts threads linking the aliens to the moon and Earth--this destroys any memory the aliens have of the human race.  The aliens, unaware of us, leave the solar system, never to return.

Of course this story has loose threads and plot holes.  It is never explained how the moon energizes people's latent psychic powers.  And won't the aliens wonder what happened to Xilmer?  Don't they have any written or digital notes about their contact with the human race?  Recordings of their conversations with Xilmer and Wentworth? Still, I liked it.

Before we bid a fond farewell to The Far-Out Worlds of A. E. Van Vogt, let's do a little tally.  Of twelve stories, eight are good, three are OK, and only one is bad.  So, a quite good collection.  But we were promised more, stories that were far-out, full of surprises and unforgettable "nova" concepts.  Did the book deliver?

I think the collection does deliver--I think it is far-out.  By my reckoning, seven stories are definitely far-out, three are somewhat far-out, and only two are not at all far-out.

The Far-Out Worlds of A. E. Van Vogt is a collection I can strongly recommend.  It includes both characteristic Van Vogt works like "The Ultra Man" and "Purpose" which Van's committed fans should love, and stories like "Process" and "The First Martian" which I believe would appeal to a broad spectrum of SF readers.
Posted by MPorcius at 2:58 PM