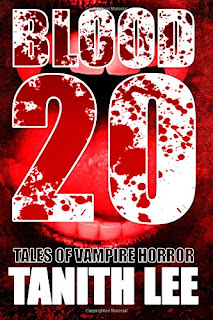 In 2015 Telos Publishing released Blood 20: Tales of Vampire Horror, a collection of stories by Tanith Lee.  I looked over the volume's table of contents at isfdb, thinking to use it as a guide to what Lee stories I should read next, and picked out three interesting titles that were readily available at the internet archive.  Let's try these stories by the talented Ms. Lee on for size.

But first, links to my blog posts about four stories presented in Blood 20 that I have already read: 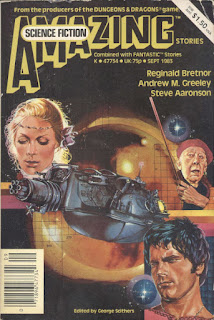 This story made its debut in Amazing, in an issue with an ad for Star Frontiers, a game my brother and I spent many hours playing, an interview with R. A. Lafferty, and a poem by Thomas Disch.  The art in this issue is also pretty good.  Definitely an issue worth checking out.
"Il Bacio (Il Chiave)" takes place in 15th-century Rome.  Four rich young men, the eldest no older than twenty, are hanging around at one of their homes, drinking, gambling, and talking.  One of the men, Valore della Scorpione, is so good-looking it is hinted that his friends have a homosexual attraction to him, and the third-person omniscient narrator suggests he is like the group's god.  Part of Scorpione's attraction to these aristocrats is that he is a bad boy, his family having a bad reputation and he being a man who owes everybody money and refuses to pay these debts.
Scorpione proposes to his cronies a way he might get out from under these debts.  He produces a key and says it is the key to the bedroom of a beautiful female relative of his, and suggests they dice for the key--the winner of the key can go to the woman's room and have his way with the lovely woman--he promises she will not resist his attentions.  If Scorpione should win the key his debts are forgiven.
As we saw recently when we read The Birthgrave and its sequels, Lee does not balk at including in her writing stuff that might offend or disgust people.  Before the dicing for the key can begin, a guest of the host arrives, a tall arrogant Jew in fashionable attire, Olivio di Giueda, a talented painter and experienced alchemist, and some of the characters and even the narrator say things that are quite anti-Semitic.  One of the four men even storms out rather than sit with a Jew, and di Giueda, with whom the host has a business relationship, takes the empty seat.
Knowing this was a vampire story before starting it, I had been primed to scrutinize each character with an eye towards whether he might be a blood-sucking fiend.  Sexy and charismatic Scorpione was, of course, a prime suspect, but when di Giueda arrived he joined Scorpione near the top of the list--not only is he tall and commanding and all that, but in his repartee with the three remaining aristocrats he seemed to be exhibiting some pretty intimate knowledge of ancient times.  Could both Scorpione and di Giudea be vampires?
The men dice for the key--Scorpione plays foolishly, as if he wants to lose.  When the dicing is over di Giudea has the key, and to the chagrin of the other gentiles, Scorpione leads the Jew off to the promised lady's bedroom.  It turns out that the key unlocks a tomb--in which lies a dazzlingly beautiful woman; she died 150 years ago of plague but, uncannily, her luscious form has been preserved.  In the tomb we readers are witnesses to eye-popping events redolent of incest and necrophilia and learn who is and who is not a vampire.
A solid icky vampire story noteworthy for the surprisingly acerbic stuff about Jews--it is hard not to think Lee is suggesting that Jews and vampires are sort of similar, that both constitute out groups whom the mainstream accuses of arrogance and of drinking Christian blood.  As I read "Il Bacio (Il Chiave)" I wondered if di Giueda, the talented and well-dressed Jew who is hobnobbing with the aristocracy of 15th-century Italy, was meant to remind readers of Benjamin Disraeli, the well-dressed Jewish intellectual who became a leading politician in 19th-century Britain and friend of Queen Victoria and who thought that the Jewish people were a sort of natural aristocracy.
"Il Bacio (Il Chiave)" was included in a 1993 pamphlet of essays about Lee put out by the British Fantasy Society called Tanith Lee: Mistress of Delirium, and since has appeared in three different Lee collections, including a French one. 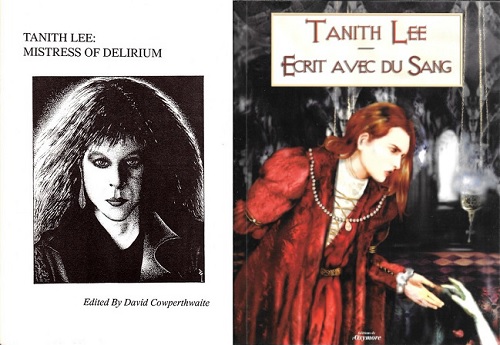 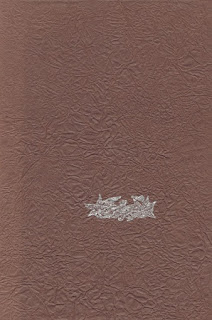 "The Beautiful Biting Machine" first appeared in a small run chapbook that was illustrated by Judy King-Rieniets and signed by Lee and King-Rieniets; five years later in 1989 it was included in the anthology Arrows of Eros.  I read the story in the 2013 collection Space is Just a Starry Night.
This is one of those stories in which mysterious things happen and are described obscurely, and then explained fully at the end of the piece.  I have to admit that, while I was in the middle of the story, trying to figure out what was going on, I thought the story would end ambiguously and I would never really know if my guesses had been correct, and was a little disappointed that Lee just explained everything at the end.
Anyway, I'm just going to tell you what is going on in the story--remember that this blog is super-spoily by design.
It is the future!  The human race has colonized the galaxy and has peaceful interactions with all kinds of intelligent spacefaring aliens.  Our story is set on a "pleasure planet" where a Mr. Qire owns a sort of brothel that caters to clients with a peculiar fetish by providing them a robot to have sex with.  This robot (described in detail by Lee, who also describes in detail the decor of the robot's chamber the way she customarily describes rooms and settings in her work) has the form of a sexy vampire woman--the brothel's customers are people who find the idea of being attacked by a vampire sexually arousing.  The robot has been programmed to bite people and suck their blood, but only a little blood, not a life-threatening amount, and everything is sterile and sanitary and the robot injects drugs in the johns in order to make sure their wounds heal quickly and so forth.
The sex robot is a very complex piece of machinery, and works to fine tolerances, and in fact has malfunctioned a couple of times and accidentally killed clients.  A very skilled technician is required to keep this thing in proper working order so it won't kill clients, and luckily Qire has just such a dedicated man on staff--Beldek.
One day Beldek is in the robot's elaborate chamber, conducting delicate repairs.  One of Mr. Qire's other employees, a "runner," sneaks in to the chamber.  This runner wants to have sex with the vampire girl robot, but can't afford the fee, and Mr. Qire doesn't give freebies to the staff--the runner bitterly assumes that Beldek has sex with the robot all the time, but he is wrong.  He finds Beldek not having sex with the robot, but drinking the blood that has accumulated inside the in the course of its normal operations.  Beldek is a vampire, a real vampire, and drinking the blood legally and nonlethally collected by the robot is easier and safer than hunting victims down the way vampires had to in the old days.
Beldek has to keep his secret, of course, and kills the runner by letting him have sex with the robot (ostensibly a bribe so he'll keep mum about Beldek's secret) and signaling the robot to kill him.
Lee stories are often full of strange and even disgusting sex, and one of the tricks in this story is--before revealing the vampiric nature of the robot--allowing us readers to think that the robot performs fellatio, that Beldek's" kink" is that he drinks other men's ejaculate, and that the runner is slain by having his penis bitten off.
This story is well-written and cleverly constructed and all that--it is certainly not bad--but I am feeling a little underwhelmed by it, maybe because 1) Lee just tells you the answer to the mystery at the end and 2) the answer (this dude is a vampire!) is no big deal because there are hundreds of vampire stories out there and Lee herself has written dozens of them.  The idea of some freako secretly drinking other guys' semen on the regular is more shocking and sickening than the revelation that we have here yet again another story about a vampire.
For another thing, I have to question why "The Beautiful Biting Machine" is set on an extrasolar planet and why are there so many minor characters who are nonhuman.  The same exact story could have just been set on Earth in the near future and had a fully human cast.  Is all that standard space opera stuff in there to serve as chaff, to divert reader suspicions that the story is in fact about a vampire, which Lee keeps hinting with puns (Beldek is said to be "re-vamping the computer program") and motifs (the brothel is only open at night and actually sinks into the ground at sunrise?)
Objectively this is a better story than most of the stories I read, but somehow it is rubbing me the wrong way, maybe just because I expect a lot out of Lee.  (And it doesn't help that the version I read had typos that I suspect were scanning errors, like "The door had dosed.") 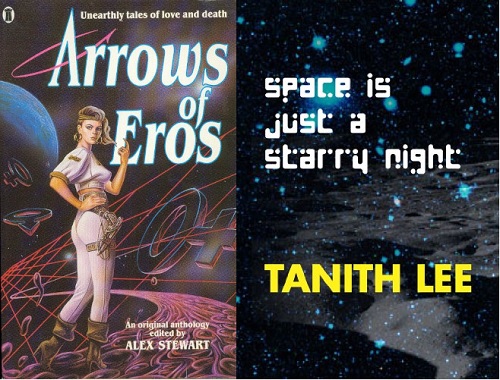 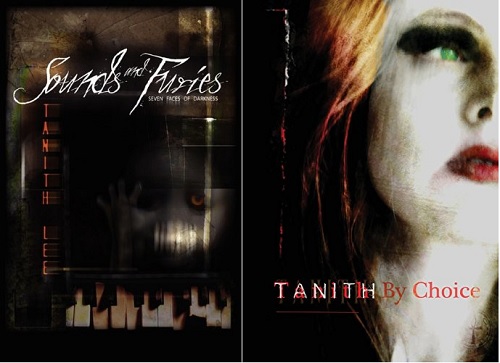 *********
I guess I have been pretty critical of these stories, but by any objective measure they are all good.  Tanith Lee is like Thomas Disch or Gene Wolfe in that she has real traditional literary talent, works hard to craft each story--on the level of the individual sentence as well as on the larger level of the story's structure--and often produces stories that are difficult or challenging, either because they are hard to figure out or present bold and possibly offensive subject matter or both.
Posted by MPorcius at 7:24 PM