Robert E. Howard: "Old Garfield's Heart," "Dig Me No Grave," and "The Dwellers Under the Tombs" 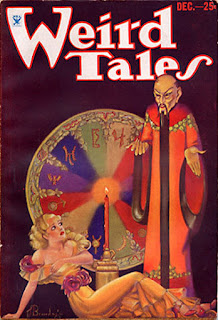 "Old Garfield's Heart" first appeared in Weird Tales and has been reprinted in many Howard collections and a few anthologies (I read the Weird Tales version.)  This is a top-notch weird horror story about white settlers, Native Americans, and elder gods in the American West, full of gruesome scenes and eerie doings!

Our narrator lives in some little western town, and knows an old geezer, Jim Garfield, who looked old when the narrator was a kid and has never visibly aged; Old Jim tells stories about participating in events--Indian fights and what not--that the narrator is sure must have happened before Jim was born.  One day Old Jim is quite sick, and everybody thinks he is a goner.  Delirious in his illness, Old Jim claims he can only die if his head is so wrecked that his soul departs his body--his other organs will heal up because long ago, after an Indian bandit stabbed him in the chest, a friendly Indian priest replaced his ruined mortal heart with the immortal heart of his god!  Sure enough, Old Jim recovers from his illness.

Later, the narrator and Old Jim get involved in a dispute with some white ne'er-do-wells and in the ensuing violence the narrator has an opportunity to gain more direct knowledge of Old Jim's alien heart and the Native American witch doctor who gifted it to him.

Very good, recommended to all fans of the weird. 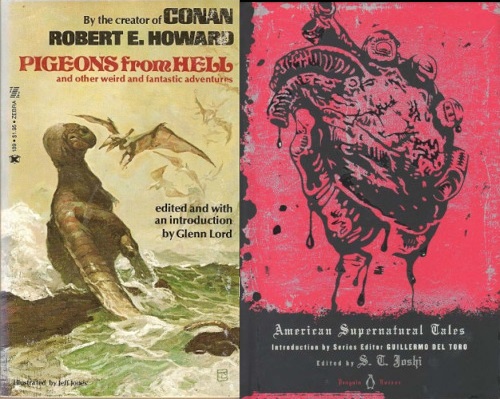 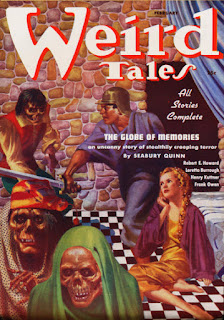 "Dig Me No Grave" has been reprinted quite widely, including in Michel Parry's The 2nd Mayflower Book of Black Magic Stories, an abridged version of which was translated into German.  As with "Old Garfield's Heart," I read it in the scan at the internet archive of the issue of Weird Tales in which it debuted.
"Dig Me No Grave" shares many themes and elements with "Old Garfield's Heart."  John Grimlan was the meanest man in town, a hermit with almost no friends who seemed to never age and who suffered strange epileptic seizures.  He was known to have spent much time travelling the world studying devil-worship, voodoo, and Shintoism!  (It is funny to see Howard throw Shinto in there--I don't think I've read any horror stories before in which Shinto is even mentioned, much less presented as dangerous or villainous.)  Only one man was friendly with Grimlan, John Conrad, a fellow student of the occult, and even he recognized that Grimlan was totally evil.
Grimlan dies in Conrad's presence, and Conrad asks our narrator, John Kirowan, to help him fulfill the strange instructions Grimlan has left those who must dispose of his body.  In Grimlan's house they discover evidence that he was like 300 years old and secured that longevity long long ago by making a pact with some demonic god; they also find an "oriental" man whose eyes are yellow and who wears a yellow robe awaiting them by Grimlan's corpse.  Conrad must read a long incantation before Grimlan's cadaver, and when the spell is complete Grimlan's body and the Asian man vanish--we are given every reason to believe Grimlan's soul and body are now in the hands of the diabolical being who granted Grimlan longevity, payment for that boon.
This story is just OK.  It compares very unfavorably with "Old Garfield's Heart," which it so resembles in theme.  The characters in "Dig Me No Grave" and their relationships with each other are undeveloped and they demonstrate little agency and have little at stake in what is happening--it is said that Grimlan was evil, but I can't remember any actual crimes being ascribed to him, the "oriental" never speaks, and Conrad and Kirowan are never at risk, do not make any decisions or pursue any goals, they are just witnesses to some unusual events.  While "Old Garfield's Heart" drew on Howard's interest in and knowledge about the American West, giving the story a level of authenticity and depth, the references to Africa and Asia in "Dig Me No Grave" are vague and sketchy.  The horror images in "Old Garfield's Heart" are also much better than those in "Dig Me No Grave," more gruesome and more original and specific--the black candles and the mirage of a demon in "Dig Me No Grave" feel generic and banal.
Too bad; this one is no more than acceptable filler.
"The Dwellers Under the Tombs" (1976) 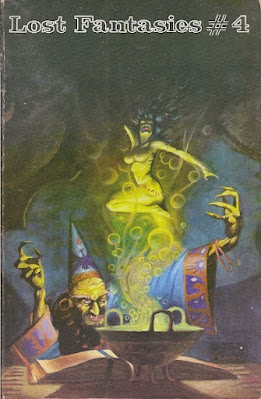 This one first saw print in a 1976 anthology edited by Robert Weinberg, Lost Fantasies #4; two years later it was included in the collection Black Canaan, and it is that version I am reading.  (Sadly, I must report that the version of the story printed in Black Canaan is rife with exasperating typos.)  Our friends over in Europe, the ones who are reputed to eat snails and frogs, made "The Dwellers Under the Tombs" the title story of a Howard collection, so they must have liked it; we know those guys have good taste, so I started "The Dwellers Under the Tombs" expecting it must be pretty good.
Old Jonas Kiles just died; Jonas was one of those guys who spent a lot of time travelling in the mysterious East.  Sitting at his deathbed was his estranged brother Job, and right before he expired Jonas told Job that after he died he was going to rise from the grave and drag his brother down to Hell!  A few nights later old Job comes running to our narrator, O'Donnel, and his friend Conrad (Howard reuses names with insouciance)--he saw Jonas's face at his window!  Job wants to go to Jonas's tomb, a structure first built 300 years ago by their ancestor the pirate but never used because said buccaneer was lost at sea, to see if Jonas's body is there, and he gets O'Donnel and Conrad to accompany him on this creepy mission.
Over the course of a night of horrifying exploration, O'Donnel and Conrad learn that Jonas Kiles faked his death (over in India or someplace he learned how to slow his breathing) and manufactured all kinds of clues that would make his brother Job think he was a vampire.  Jonas expected Job to come to his coffin to kill him with a stake, and he planned to ambush and kill his brother, and then impersonate him and move in to Job's comfortable house; while Job was frugal, Jonas was a spendthrift and envied his brother's lifestyle.  This plan was facilitated by the fact that Jonas had found a secret door in the 300-year old tomb leading to chambers where that 17th-century pirate must have hidden treasure and to another door outside on the other side of the hill.
The secret treasure chamber is also connected to an ancient underground labyrinth; Jonas's plan fell apart because he accidentally aroused the attention of a race of troglodytes, a people, once human, who lost a war with Native Americans long before the arrival of Europeans and were driven to live underground; over the centuries they degenerated into monsters.  The Kiles brothers both lose their lives in encounters with these monsters, while Conrad and O'Donnel just barely escape out that back door.
This is a fun story, though open to some criticism.  There is plenty of melodramatic, over-the-top dialogue, but it is fun, and the plot is a little convoluted and its constituent elements are not exactly original (we see such common Lovecraftian elements as a recovered diary that explains Jonas's plans and explorations and wall paintings that provide insight on the history of the ancient inhabitants of the tunnels), but overall "The Dwellers Under the Tombs" is successfully put together and entertaining.
Moderately good. 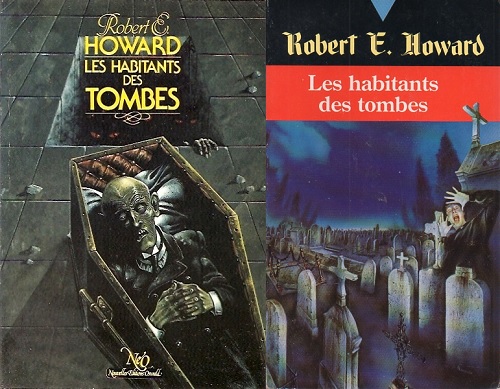 **********
S. T. Joshi was right to include "Old Garfield's Heart" in American Supernatural Tales--it is a superior and very American story.  "Dig Me No Grave" and "The Dwellers Under the Tombs" are not very original, but while "Dig Me No Grave" is flat filler, "The Dwellers Under the Tombs" is fun and exciting, with passionate characters with powerful motivations and the tension and violence we hope to find in our genre fiction.
Posted by MPorcius at 9:14 PM