Even though I buy used paperbacks at a rate that exceeds my ability to read them, I still check in at various university and public libraries to see what is going on.  On a recent trip to the Franklin Avenue branch of the Des Moines Public Library I spotted the 2005 softcover anthology Outsiders, edited by Nancy Holder and Nancy Kilpatrick, which is said to contain "All-New Stories from the Edge."  The book seems to be targeted at the "teenage-girls-who-cut-themselves" demographic, but when I saw it contained a story by MPorcius fave Tanith Lee, as well as contributions from Kathe Koja and Poppy Z. Brite, in whom I have recently taken an interest, I decided to borrow it.  This weekend I read these three pieces.

In the tradition of my blog posts about stories from Redshift: Extreme Visions of Speculative Fiction, in which I judged to what extent the stories truly were"extreme," I won't simply assess whether Lee's, Koja's and Brite's tales are good, but will also assess how edgy they are.  Whose story will be the edgiest of the batch?  Place your bets!

"Scarabesque: The Girl Who Broke Dracula" by Tanith Lee

This story is apparently a chapter of an unfinished novel, the fourth Blood Opera novel, which isfdb suggests was never published.  I have not read any of the Blood Opera books, but I assume in the world they depict vampires are real.  If "Scarabesque: The Girl Who Broke Dracula" is considered alone, however, I think everything that happens in it is explicable without recourse to the supernatural.

Sue Wyatt is a plain and skinny 24-year-old woman who works in retail and has middle-class parents.  Every Friday night she puts on lots of cosmetics, black clothes and a long black wig and rides the train to London, where she calls herself "Ruby Sin" and hangs around in goth bars and clubs.  We follow the course of one of these Friday nights during which she is rescued from lesbian bullies who want to jab her with a syringe by a mysterious foreign man who then takes her to his elaborately decorated rooms in an abandoned part of town.

Interspersed with this tale are flashbacks to when Sue was fourteen, lonely and friendless, and became obsessed with the novel Dracula by Bram Stoker and the film version by Francis Ford Coppola.  (She watched the videotape of the movie so much she broke it.)  The same week she rented the movie she was raped for the first time by her father, when he found her dressed up in her mother's cosmetics and lingerie.

The mysterious foreign man makes Sue's dreams come true--he bites her neck, shedding blood, while caressing "her center," bringing her to her first orgasm.  The next day she can't find the man or even his decrepit neighborhood; she searches for him for years, to no avail.

This story is not bad.  I think the history of Sue's Friday night is supposed to remind you of Jonathan Harker's visit to Dracula--the dangerous lesbians are like Dracula's brides, for example.  Like Harker, Sue rides in a cab driven by a mysterious taciturn figure.  Lee describes London's neon lights, which are perhaps meant to evoke our memories of the eldritch lights Harker sees as he travels through Transylvania.

Sue is definitely an outsider, with no friends or lovers, and no real family to speak of. She alienates herself from mainstream society with her goth outfit, but without joining the goth subculture--she goes to the bars and clubs but never talks to anybody there, ignoring women who address her and rejecting men who try to pick her up (Sue's experience with her father has soured her on the idea of sexual intercourse; her dream is to be bitten by a vampire like Lucy and Mina are in Dracula.)  I'd say this story is pretty edgy, despite its pun title.

I should note that this story reminded me of Richard Matheson's famous and brilliant 1951 story "Drink My Red Blood" (AKA "Blood Son,") in which a young boy becomes obsessed with Dracula and, in the story's closing lines, meets the Count, who embraces him. 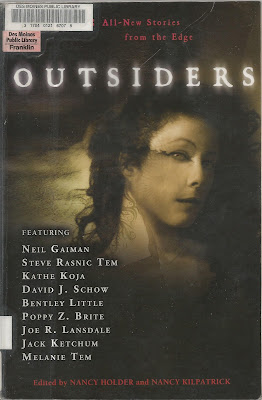 This is a decent tear-jerking mainstream story.  I didn't detect any speculative fiction elements.

Our narrator is Rikki, a high school student.  I think Koja deliberately leaves Rikki's sex unspecified.  Rikki's mother is in the hospital dying of cancer, and the stress of this tragedy has severed Rikki's ties with his or her friends, ruined Rikki's grades at school, and strained Rikki's relationship with his or her father.

Rikki wants to be a filmmaker, and every week goes to see a film called Ruby Tuesday.  This is a goofy musical, clearly based by Koja on Rocky Horror Picture Show--the same people are in the audience every week, wearing costumes and singing along, throwing confetti during a wedding scene, etc.  Rikki studies the film, taking notes, hoping to someday create a film which, like Ruby Tuesday, will serve as an alternate world to which people can escape their problems.

Rikki is an outsider--like Sue in the Lee story he/she leaves mainstream society by taking up the rituals of a fringe community (the people who see and interact with the crazy movie every week) but without actually joining that fringe group--Rikki doesn't dress up or make friends with the other Ruby Tuesday fans.  Compared to the Lee story, with its gross sex, violence and crime, however, "Ruby Tuesday" is not particularly edgy.

This isn't a real story with a plot and all that, more like a bunch of character sketches of people who work at a New Orleans restaurant.  According to the intro to this story, the characters described in "The Working Slob's Prayer" appear in a series of Brite's novels.  The story has no speculative fiction elements.

Leslie, a waitress, is from Brooklyn, and has to yell at the cooks to get them to put out the food as fast as she would like: "Fuck you in the ass, you pig motherfuckers!...If I want any more shit from you, I'll scrape it off the end of my dick, OK?"  Paco is the head chef, a culinary genius and misogynist who has contempt for his customers and employers, most of whom can't appreciate his abilities.  Rickey (another Rick in this anthology?) and G-man are a gay couple, Rickey somewhat violent and low-class, G-man more sensitive and conventional.  The tensions in their relationship are the most interesting part of this story: G-man is offended and worried by how much Rickey idolizes the thuggish Paco (Paco, for example, uses the term "fag" derisively to describe men who are ineffectual or whiny.)  Shake is a Croatian-American whose parents wish he would get out of the restaurant business.

This is a somewhat forgettable mainstream story.  Maybe people fascinated by the seamy side of the culinary world (people who love Anthony Bourdain, perhaps) would get excited by it.  Is it edgy?  Are the characters outsiders? Well, everybody uses cocaine and gets drunk all the time and swears all the time.  I guess that is kind of edgy.  But in 2015 aren't the drug culture and homosexuality practically mainstream? And since they are all working together on a team, making money in a pretty prestigious industry, can we really consider them outsiders?

This is the least interesting and least edgy of the three stories I read in Outsiders this weekend.

I have to admit I was a little disappointed in these stories, even though none is actually bad.  For one thing, I expected them to have more SF elements.  For another, I expected them to represent efforts to really push the envelope, full of shocking behavior or ideas.  The Lee is the only one that seems to be really dedicated to presenting edgy behavior, and the only one I would really recommend to the typical SF fan.