Outside the Universe by Edmond Hamilton

I think that never in all space and time could there have been a moment as strange as that one, when the mighty fleet of our galaxy lay prow to prow with this other mighty fleet from the dark, unguessed mysteries of outer space. 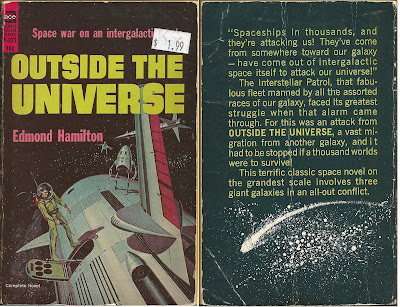 I'm no expert on Weird Tales, and when I think of that "unique magazine" I think of Conan and Cthulhu, of sword and sorcery tales and of horror stories.  But Weird Tales also published space operas by Edmond Hamilton, including today's topic, Outside the Universe, which first appeared as a serial over the course of four issues in 1929.  Last week I bought the 1964 book printing of Outside the Universe by Ace (Ace F-271) at the Jay's CD and Hobby in South Des Moines.  This edition includes an illustration by Jack Gaughan and an introduction by editor Donald Wollheim.  Wollheim points out that A. Merritt adored Outside the Universe and wrote Hamilton fan mail about it. Wollheim, in his promotion (or defense) of the novel also seems to cast aspersions on SF writers who seek to use SF as a way of discussing science, saying that Outside the Universe was a "novel which told a tale of interstellar adventure on the kind of scale that would terrify the slide-rule space engineering storytellers of today....The purpose of the novel was not an exposition of advanced mechanics; it was an entertainment in starry voyaging....And, really, is there anything more anyone could ask from a science-fiction novel?"

Our narrator is Dur Nal, human captain of one of the Interstellar Patrol's cruisers, a slender warship with a crew of approximately one hundred.  The Milky Way is a united political entity, with a central government in the Canopus system, and Dur Nal's crew is drawn from "a score or more" different intelligent species, including "Octopus-beings from Vega, great planet-men from Capella, [and] spider-shapes from Mizar...."  Dur Nal's lieutenants are an Antarean, Korus Kan, who has three eyes, three arms and three legs and is made of metal, and Jhul Din, a crustacean from Spica.

Dur Nal and company are patrolling the edges of the Milky Way when they detect an alien armada of 5,000 vessels bent on conquering our galaxy.  A running fight with the alien invaders leads to a terrific naval battle between the Milky Way fleet and the enemy, a battle lost by the good guys because the aliens have special "attraction-ships" which can magnetically grab the Milky Way ships and draw them to their destruction.

Dur Nal's ship is one of the few survivors of this debacle, but the craft is crippled, so Dur Nal and his crew (somehow) sneak up on an alien ship and board it.  They find that the extragalactic invaders are like worms or snakes, and Hamilton refers to them as "serpent people."  We are told it is unsafe to fire off ray guns inside a ship, so the fighting during the boarding action is all hand to hand, our people bludgeoning the invaders with metal bars while the snake people seek to constrict the boarders to death.  Sixty percent of the boarders are killed (as are all the serpent beings), but Dur Nal and comrades seize the ship and bring it back to Canopus.

Documents on the captured enemy ship are (somehow) translated, and it is learned that the invaders come from a dying galaxy, where nearly all the suns have gone dark.  The snake people tried to conquer the Andromeda galaxy, but were rebuffed, so attacked the Milky Way, their second choice.  The president of the Milky Way galaxy, "a great black-winged bat-figure from Deneb" gives Dur Nal, Korus Kan and Jhul Din command of the refurbished alien craft (it is faster than our own ships) and the mission of travelling to Andromeda to request aid.

In these adventure stories the protagonists tend to get taken captive, and, sure enough, on their way to Andromeda our heroes are captured by the serpent-people and taken to their dying galaxy of expired and decrepit suns.  The snakemen are masters at using force fields, and have surrounded their entire dark galaxy with one.  The opening to the galaxy is guarded by two colossal cubical space fortresses.  Nur Dal and the survivors of his crew are taken to the capitol planet of the enemy, where they find that the snakemen do not make their buildings of metal or stone, but the same flickering blue force fields that guard their galaxy.  Construction and demolition in the vast city that covers the entire surface of the planet is as easy as flipping a switch.  In the towering central government building our heroes are interred in a glass case in a museum of biology, pumped full of a drug that paralyzes and preserves them, suspending all bodily functions but thought:


Rigid, unmoving, unbreathing, yet with consciousness, mind and senses as clear as ever, living brains cased in bodies that were helpless and motionless, I think that no position of any in all time could have been more terrible than ours.

Of course our heroes make it out of the dark galaxy and to Andromeda.  The Andromedans are people made of gas, and have technology and power that surpasses that of the people of the Milky Way and of the serpent people; in fact, they have rearranged the very stars and planets of their galaxy for maximum efficiency.  In their government chamber they vote to launch a vast fleet to the dark galaxy and exterminate the snake race, and to put our man Dur Nal in charge of the whole shebang!

The last quarter of the novel follows the Andromedan fleet as it attacks the dark galaxy and then races to the Milky Way in hopes of catching up with the serpent fleet before it has made operational its super weapon, a conical ship 20 miles across armed with a death ray that can exterminate all life on a planet with a single shot!  In the very last pages of the book the Andromedans use their star shifting technology to move two suns together, crushing the giant cone between them.

If you are a stickler for scientific accuracy and an airtight plot then this book is not for you.  Hamilton uses the words "universe" and "galaxy" interchangeably, as evidenced by the title.  Space craft routinely travel a thousand times the speed of light, with a minimum of odd or unusual effects.  (However, during the climactic naval battle numerous ships travelling at such alarming speeds within the boundaries of solar systems blunder into planets and stars and are destroyed.) There is lots of talk of ether, the invisible substance that lies between the stars, and it plays a role in the story like that ocean currents and the weather would play in a story about ships at sea.  Ether currents can influence a ship's speed or course, and early in the story our heroes use an ether storm (it is marked by a space buoy) to foil pursuit.

As for plot holes, after numerous scenes in which ships spot each other via equivalents of radar (a "star chart" which shows moving "dots" for ships and "circles" for heavenly bodies) and powerful telescopes ("distance windows" and "telemagnifiers") it was a little difficult to suspend disbelief when Dur Nal's ship sneaked up on an alien ship and his crew of over one hundred spacers broke into it without being detected.  And how (in a matter of hours!) could the Milky Way cryptographers have deciphered the extragalactic documents?  And then there is Dur Nal figuring out, in minutes, how to fly the serpent ship.

As with much fiction involving wars or adventures, we also have to accept that thousands of people all around the hero are always getting killed in battle after battle while he somehow always manages to escape injury. We can (with some effort!) confidently ascribe the survival of Achilles, Aeneas, John Carter, Conan, and Elric on the battlefield to their superior ability to dodge and parry, and/or to divine intervention, but we have to accept that Dur Nal is just lucky that his ship is the one out of thousands that isn't hit by an irresistible death ray.  Even Dur Nal seems a little perplexed by his longevity:


How our own ship escaped, in the van of our fleet, I can not guess, for space about us at that moment was but a single awful mass of shattered and shattering vessels.

Outside the Universe is also remarkable in that there is really no character development, no relationships between the characters, and very little "normal" emotional content--all the emotional content is on the order of over the top terror of getting tortured or awe at the beauty of celestial phenomena and the sight of thousands of space vessels engaging in battles which lead to a fatality rate of 90% or higher.  The descriptions of stars and galaxies and space battles can be a little repetitive; perhaps readers in 1929 were less likely to notice this, taking a month out between reading each of the four installments. 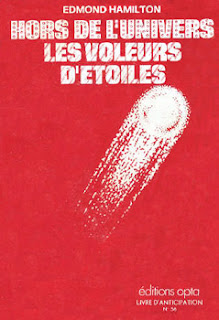 Despite all these issues, the novel still has considerable appeal.  Hamilton tells the tale with gusto--the pace is fast and Hamilton writes in long breathless sentences full of superlatives.  Hamilton also has a wide range of invention, coming up with all sorts of alien races and menacing phenomena and curious settings.  There are plenty of striking images--the book is like a script for a movie you create in your mind, a technicolor epic replete with bizarre and awe-inspiring visions.

As for ideological content, the only thing notable (beyond the implied superiority of representative democracy) is that, while our hero is a human male, all the other characters, including our hero's political superiors, are aliens; Hamilton's novel doesn't suggest that Earth or the human race are in any way special, but just one of dozens of civilizations united E Pluribus Unum style.  We see so many SF stories in which humans in general or Europeans in particular are superior and have some kind of manifest destiny or Kiplingesque burden (I'm thinking of John Carter and Tarzan here, as well the end of Van Vogt's The Weapon Makers) and so many in which humans are assholes and elves or alien collectivists are shown to be our betters, that I think this vision of brotherhood and equality is noteworthy.  (I get the impression that Star Wars and Star Trek are going for this attitude, but perhaps are limited by the fact that they need to cast humans as the main characters.  Wasn't Han Solo supposed to be a frog man or something?)

I thought Outside the Universe was fun.  I think we can also see it as an interesting document in SF history, an early example of the seminal space opera genre which has conquered Hollywood with all those Star Wars and Star Trek movies and an example of what Harry Harrison was satirizing in things like Bill the Galactic Hero and what the New Wave writers were trying to get away from.  After a suitable interval (to catch my breath!) I will definitely be reading more Hamilton space operas.
Posted by MPorcius at 3:54 PM