This was no-man's-land, eeriest of half-worlds, half-world of blackness, chilly menace, and silence except for the distant howling of dogs.  Occasionally there were soft shimmering and whines high above, indicating that the nightly artillery duels were in progress.  The passage of the shells in either direction made a thin curving roof high above, but they seemed to have no connection with you or with the long thin night, seven men wide, which was your private strip of no-man's-land. 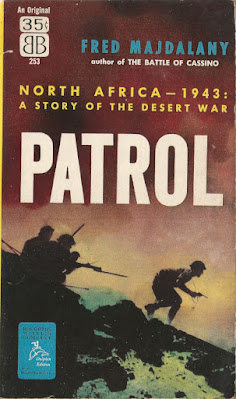 British military history is one of my on-again, off-again hobbies, and I have blogged about a few novels and collections of stories by British Army and Royal Navy veterans, like No Man's Land by Sapper, The Cruel Sea by Nicholas Monsarrat, and Take These Men by Cyril Joly.  So, when last week I saw a US paperback printing of Fred Majdalany's 1953 novel Patrol at an antiques mall priced at $2.00, I seized it.  Majdalany served in the Mediterranean as an infantry officer in the WWII British Army, and in civilian life was a professional writer, so I had every reason to believe this book would be worth my time, and over the last two or three days I read its 149 crumbling yellowed pages.

Lieutenant-Colonel Jimmie Morton, still in his twenties, commands a depleted and exhausted battalion on the front lines in North Africa in 1943.  Brigade HQ recognizes the battalion needs a rest and has given them the OK to take it easy for a few days.  But then a message comes from Division--a patrol must be made tonight on the feature facing them called White Farm, a known strongpoint in the German line!  (They earliest pages of the novel let us in on something Morton doesn't know--the rationale for this unnecessary patrol is totally bogus, the result of an officer back at Division selling the General a line of BS to cover his own ass!)

Morton assigns this night patrol to Charlie Company, commanded by his best officer, twenty-four-year-old Major Tim Sheldon, our main character.  Sheldon's company has been reduced to two platoons, and one platoon commander is exhausted from leading patrols earlier in the week, while the other just arrived from England and has never led a patrol or seen action, so Sheldon decides to lead this patrol himself, even though, if you go by the book, an officer of his rank is too valuable to risk on such an operation.

There's a brief reminiscence about Sheldon's pre-war life and his relationship with the faithless woman who broke his heart, "Julie the little bitch," and a long flashback of like 50 pages to Sheldon's experience of being wounded and sent to one hospital after another, culminating in his recuperation in a hospital in Algiers where he met an attractive nurse named Mary Murgatroyd and went to brothels.  One long scene is what we might call "Orientalist," a depiction of exotic foreigners whose alienness is both alluring and disturbing.  A French officer takes Sheldon to a brothel where the whores are native belly dancers, members of the Ouland Nail tribe.  Majdalany describes their dance in detail, and then Sheldon sleeps with one, the text emphasizing how perfectly beautiful he finds the girl's face and skin, but also how when he looks into her eyes he sees "the barbaric inhuman purity of a being for whom right and wrong do not exist."  The punchline to this Ouland Nail brothel episode comes when the Frenchman tells Sheldon the girl is fourteen.

After this flashback, which is chock full of stuff for you gender studies types and Edward Said enthusiasts, we get back to what most readers will care about--the dangerous night patrol to White Farm!  It is a moonless night, and Sheldon, having studied the four-mile path to White Farm through binoculars from an observation post on the British side of no-man's-land, leads six other men laden with Bren guns and Sten guns and grenades through the inky blackness with his compass and the bearings he has written on a piece of paper.

The 35 or whatever pages that cover the actual patrol are good, focusing on Sheldon's thoughts and feelings as well as all the little decisions he has to make as he tries to get the patrol to the farm to gather the intelligence that is the object of this mission.  Then in the book's last few pages comes the final tragedy and the in-your-face reinforcement of two of the novel's big themes: that the people in the rear don't understand what it is like at the front and negligently and callously do foolish things that get the front line soldiers killed, and the theory that each man's courage is a sort of fixed supply, and as he does stressful things this supply is depleted and if it runs out he will collapse.

A solid piece of work.  The scenes with Sister Murgatroyd and the stuff about the jerks in the rear echelon are the weakest parts of the novel--they are not bad but they are pedestrian--but the stuff about the Ouland Nail is interesting and all the stuff readers who pick this book up are actually looking for--the nuts and bolts of how a WWII infantry officer plans and commands a night patrol, the suspense of sneaking towards enemy lines, and the drama of all the automatic weapons fire and artillery explosions when your sneaking stops working--is good.  So thumbs up for Patrol.