The Cruel Sea by Nicholas Monsarrat

When Ericson looked round his own wardroom, he saw in theory a journalist, a barrister, a bank clerk, and a junior accountant; but these labels were now meaningless--they were simply his officers, the young men who ran his ship and who had adapted themselves to this new life so completely that they had shed everything of their past save the accent it had given them. 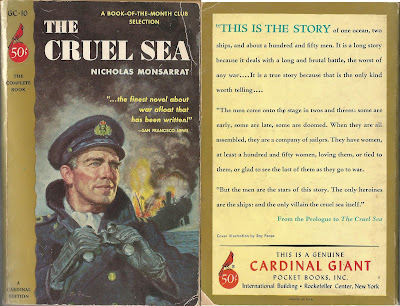 MPorcius Fiction Log's Middle West HQ recently moved from the Des Moines area to the environs of Columbus, Ohio, and on my solo 11-hour drive, poor Toyota Corolla weighted down with boxes of vases and statues I didn't trust to the movers, I stopped in Urbana, Illinois, to stretch my legs and check out a book store.  When I walked into the store I was met by the strains of classical music and found my path obstructed by a cart full of sheet music and the store's bespectacled inhabitants.  These worthies were discussing some kind of recent symphonic composition, how its movements symbolized different eras in the history of Western civilization.  Or something; it was pretty far over my head.

As they opined I walked the aisles between the towering stacks of hardcover books.  I didn't see any paperbacks, and I didn't see a science fiction section, either.  I was too shy to ask the sophisticates where (if?) they carried such books, but I wanted some kind of souvenir of this pit stop on my journey from one four-letter Midwest state to another, so I scrutinized the fiction section.  Maybe there would be something worth buying by Lessing, Maugham or Nabokov, writers whose work I could purchase in view of these Urbana geniuses without embarassment. 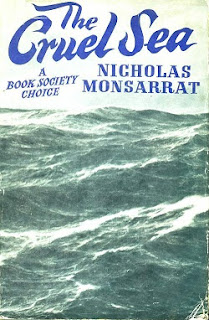 Lying crosswise atop a shelf of Ls, Ms and Ns was a lone paperback, a Cardinal Giant edition of The Cruel Sea by Nicholas Monsarrat.  (I actually read Monsarrat's memoir Three Corvettes in the '90s, but I don't remember anything about it.)  Along with the surprisingly cheerful naval officer (I guess he doesn't know anybody on that burning ship in the background), the cover was marked with a blurb from a California newspaper declaring The Cruel Sea to be the best novel about naval warfare of all time!  This sounded like a direct challenge to Alistair MacLean's 1955 novel H.M.S. Ulysses, which I read last year, and which also has an extravagantly superlative cover blurb.  I have always been interested in British naval history, and the musicologists only wanted one dollar for this volume (just double the cover price!), so I snatched it up.

My 1954 edition of The Cruel Sea, a novel first published in 1951, clocks in at 501 pages.  The book follows the officers of H.M.S. Compass Rose, one of the first Flower-class corvettes, small slow ships tasked with defending convoys from Axis submarines.  Compass Rose's captain, Ericson, is a professional naval officer, but the bulk of the crew is made up of people who have joined the Navy since the start of the war, leaving behind civilian careers; Ericson's lieutenants left law offices, banks and newspapers for just a few weeks of training and then a few years fighting for their lives against the elements and the Kriegsmarine.  Compass Rose is based in Liverpool, and Ericson and company go on dozens of voyages, escorting convoys of supply ships, troop transports, and merchant vessels to and from the midpoint between Canada and Britain, as well as to and from Gibraltar.  While on these missions she, her fellow escorts, and her charges are menaced by German aircraft and U-boats, and many Allied ships and seamen (and even some women!) are wiped out by torpedoes and bombs.

In the first 100 pages or so of the novel we have a villain, Bennett, an Australian, the second-in-command of the Compass Rose, who bullies his direct subordinates, shirks his duties, and lied about his experience in order to secure this position.  This brute, after Compass Rose's first few voyages, feigns an illness that gets him transferred to a safe job ashore.  In the last third of the book we learn that he has become Australia's national hero by lying about his exploits, claiming he sank many submarines but was callously unrecognized by the English government.  Leftist English people I have met (academics, like most of the people I meet) have expressed to me a distaste for Australians quite similar to the hostility evinced by left-wing Northeasterners for Texans--in the eyes of these English acquaintances of mine Australians are "macho" braggarts, uncouth and unsophisticated cowboys.  Reading The Cruel Sea I wondered if Monsarrat, who portrays a skinny English journalist (Lockhart, who replaces Bennet as second-in-command), a shy English bank teller (Ferraby, who manages the depth charges on Compass Rose) and an impeccably educated English lawyer (Old Wykehamist Morrell) as more courageous than the boisterous and muscular Australian Bennett, was somehow voicing a criticism of the Australian citizenry held by many English people. 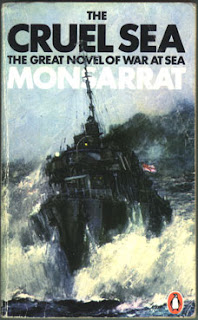 Australians aren't the only group that comes in for criticism in The Cruel Sea--in fact they get off lightly compared to the French (Free French sailors, who are said to be uncommitted to the struggle and eager to return home, whether or not France is liberated from German control, are unfavorably compared to Scandinavian sailors) and the Irish.  Monsarrat blames Ireland's neutrality, which bars British use of naval and air bases which could extend the range of Allied warships and warplanes hundreds of miles, for many Allied losses, and grouses that the Irish are free riders who enjoy the protection from Hitler's tyranny provided by the hard-pressed Allies while contributing nothing.  And then there are the Liverpudlian dockworkers who refit Compass Rose in 1941.  Not only are most of the "dockies" slackers who do a mediocre job, but their unions actually use the current crisis that is threatening to destroy modern civilization as an opportunity to go on strike and wring more money out of the British taxpayer!  Lockhart muses, "They were among the people whom sailors fought and died for; at close quarters, they hardly seemed to deserve it."

The Cruel Sea is quite superior to H.M.S. Ulysses.  For one thing, Monsarrat's tone is more mature, varied, and believable.  MacLean wrote hyperbolically, the text full of extremes: at the start of his novel we were told, at some length, about how the eponymous vessel was the most advanced ship in the world and the crew the most put upon crew in history sent on the most difficult mission in history.  Then every page was about the Allies fucking up again and again and getting thrashed by the Germans again and again.  H.M.S. Ulysses was a kind of operatic tragedy brimming over with larger than life characters enduring the biggest storms of all time and the most dangerous battles of all time, suffering the most crushing defeats of all time. Monsarrat's writing is more even, more realistic, with a mix of ups and downs and a cast of more easily relatable characters with believable flaws and virtues.  There are plenty of Allied fatalities and British screwups--like a horrific friendly-fire incident when Compass Rose drops depth charges in the vicinity of some 40 swimming Allied sailors, killing all of them (and no Germans, alas)--but there are Royal Navy successes, too, U-boats sunk and hundreds of Allied seamen rescued.

Another advantage of the Cruel Sea is that it follows the course of the entire Second World War (H.M.S. Ulysses only covers one mission between Britain and Russia), so we see the characters and the nature of the war they are immersed in evolve over time, and get to observe the characters' home lives, sexual relationships and friendships.  I thought almost all of the human relationships--those with nagging mothers-in-law, stifling mothers, and unfaithful wives; the relationships between Ericson and his son and between Ferraby and his daughter; and the bond that develops between Ericson and Lockhart--rang true and were, at times, touching.  I should perhaps note that feminist readers may have as much to complain about the book as Australians, Frenchmen and Irishmen; women in the book tend to be pretty crummy--manipulative, deceitful, selfish, or just boring.  The Cruel Sea isn't "We're all in this together!"/"Diversity is our strength!" war propaganda or a feel-good story in which each gender, ethnicity, and sexual orientation has an heroic representative and all demographics contribute equally to victory.  The characters feel like real people, not archetypes or tokens, and one of Monsarrat's themes is that people are most emphatically not "all in it together," nor are they contributing equally--many nations, sectors of society, and individuals do not take the war seriously at all, or exploit it as an opportunity to pursue their own selfish goals.

Just past the 300 page mark Compass Rose is sunk by the Germans, and fewer than a dozen of the approximately 90-man crew escape a horrible death.  Ericson, Lockhart and Ferraby are among the survivors, though Ferraby is mentally shattered and spends the rest of the war in a psychiatric hospital.  Ericson and Lockhart are given command of a River-class frigate, Saltash, a somewhat larger vessel based in the Clyde, and Ericson is promoted to managing entire convoys that sail all the way to Canada or to Murmansk.  The Saltash spends two months refitting in New York, so we get Monsarrat's opinion of the U.S.A. (Americans are likable and hard-working and America is obviously the future) as well as of Communist Russia (inefficient and oppressive.)

One of the book's few false notes is also to be found in its Saltash portion: Lockhart starts a love affair with a Glasgow-based female officer who is startlingly beautiful (before the war she was on the cover of Vogue) and turns out to be the perfect life partner for him.  Not only is she too good to feel true, but Monsarrat describes their first meeting, their dates, their first sexual congress, and their undying love in a romantic gushing fashion that feels sappy and overdone.  In keeping with one of Monsarrat's themes, that the true practitioner of war is consumed fully by the war and distractions can only blunt his ability to perform, the fashion model turned Wren is tragically killed back in Scotland while Lockhart is in New York, which was a relief to this reader!

It took me like two weeks to read The Cruel Sea, but this was because I have been so occupied with settling things in the new domicile--the novel is good, both interesting and entertaining, and does not feel long.  As I have said, the human relationships are good; the maritime anecdotes, action scenes and scenes of gory or macabre death also work.  As with H.M.S. Ulysses and Sapper's No Man's Land, I found intriguing the opinions about war in general and of a particular campaign of a man who actually fought in the campaign under discussion.  I would certainly recommend The Cruel Sea to military history buffs and readers of war and adventure fiction.
Posted by MPorcius at 9:31 AM