Tales of Forbidden Acts from 1995 by Koja & Malzberg, Tem and Wagner 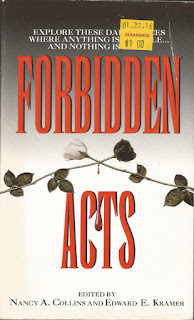 I'm still working the 1990s perversion desk!  In our last episode we confronted three tales of rape and death from Poppy Z. Brite's Love in Vein.  Today we subject ourselves to three visions from the 1995 anthology Forbidden Acts, edited by Nancy A. Collins and Edward E. Cramer.  I got my copy of Forbidden Acts on the clearance shelf at Half Price Books.  The cover is very lame, with lots of negative space, a boring picture, no blurbs and no famous names.  Was this a rush job or something?

Forbidden Acts has an introduction by Joe Bob Briggs, the B-movie review guy!  When I was still living with my parents in New Jersey my brother and I would watch all those B-movie TV shows with hosts like Gilbert Gottfried, Morgus the Magnificent, Commander U.S.A, Grandpa Al Lewis, and Briggs.  Those were the good old days!  Anyway, Briggs warns us that we will not "enjoy" the stories in Forbidden Acts, that they are "rude"and "brutal" and will "shock" and even "hurt" us.  Well, let's see if this anthology's offerings by four writers we've already talked about here at MPorcius Fiction Log will rudely brutalize us.

A professional woman is in the middle of a bitter divorce from her second husband, Gerald.  She left her first husband for Gerald because Gerald was a good lay and was as sexually ravenous as she is, but Gerald started cheating on her before the first anniversary of their wedding.  Currently our main character lives alone, sexually frustrated and spending her free time getting drunk on scotch Gerald left behind.

While drunk she hears a sound at the door, and opens it to find an odd little monster has come to visit.  This thing, which I guess is like a volley-ball-sized blob or slug (it has "stalks" and "ganglia" and green blood) but with human-like hands and face, climbs up her legs and has sex with her, using its "claws" and "smile" to give her some of the best sex of her life!  Then it crawls away.

The second time the monster visits her, after it has exhausted her with its attentions, she realizes it has the face of Gerald!  The last sentences of the story invoke the names of Paolo and Francesca, the famous adulterous lovers from Dante, and hint that, like Paolo and Francesca, Gerald and our protagonist are in Hell, being punished because they let their passionate lust carry them away from their duty.  O lasso!

This one is pretty good, a crazy pornographic monster story grounded in believable human emotion; Koja and Malzberg handle both the insane monster stuff and the realistic relationship material well.  Koja and Malzberg completists may be forced to get a copy of Forbidden Acts; I don't think this story has been published in any other place.

This is a story about how claustrophobic families can be, narrated by a guy with psychological problems who isn't good at detecting relationship boundaries; he was sexually attracted to his step-mother, for example, and to his own daughters.  Tem doesn't come out and say much about where these people live or their jobs or anything (besides that our narrator spent time in the Army), but I got a "redneck" or "hillbilly" vibe from the story, I guess because of the contractions and nonstandard grammar used in the dialogue.  "Rednecks" are a demographic that everybody feels comfortable looking down on, an "other" for people who champion diversity and are always criticizing other people for "othering" people.

The narrator's father had four wives, and may have killed one of them (she just disappeared after a loud night of drinking); he serves as a role model for the narrator. An example of his wisdom:  "It don't matter if you like your family or not.  You're tied to 'em; might as well accept that.  It's in the blood."  Tem takes advantage of the multiple meanings of "blood" in English, and there is a lot of talk about family ties ("blood knots") as well as about menstrual blood.

The narrator longed to have a family of his own, but had trouble attracting women. When he did marry it was to a woman much younger than he is (just as his father's fourth wife, the one our narrator lusted after, was much younger than his father.)  The narrator doesn't know how to be a good husband or father, and found living with his wife and three daughters difficult.  The smell of them during their periods was particularly upsetting.  When the daughters started dating he went off the deep end, and, as far as I can tell, murdered them with a sharp implement ("cutting" those blood knots the way Alexander cut the Gordian knot.)  It is possible he cannibalized them, or just drank their blood (he compares his daughters' breasts to apples, onions and tomatoes, and has drinking blood on his mind, comparing his wife and daughters at one point to vampires.)  This is one of those stories in which everything is hinted at rather than baldly stated, so maybe I am misinterpreting something.

I'm going to have to give "Blood Knot" a thumbs down; I didn't feel like the energy spent trying to figure it out was a worthwhile investment, because the plot and characters didn't interest me or inspire any feeling in me.  Some guy I can't identify with in some place I don't know about murdered his family because he was insane and/or came from a broken home--"Blood Knot" is like the news stories I ignore every day when they pop up on the computer screen or the radio.  Maybe people who are into serial killer stories and child abuse stories will like "Blood Knot."  I know Ellen Datlow and Terri Windling included it in the ninth Year's Best Fantasy and Horror so I have to assume I'm voicing the minority opinion here.

"The Picture of Johnathan Collins" by Karl Edward Wagner

Wagner of course is famous for those grim sword and sorcery tales of Kane and for writing and editing horror stories.  I've mentioned before how much I like his story "Sticks."  I also like "The Picture of Jonathan Collins," though not as much. This story appears in two later anthologies of Wagner's horror stories, so you don't have to track down a copy of Forbidden Acts to read it.

Collins is a Londoner.  During the Second World War his house suffered a direct hit from a German bomb.  He was in a coma for a week and awoke with no memory of his past--he even had to learn to walk and talk again!  Any records that may have been in the house were destroyed by the bombing. Forty years later he still looks thirty years old, and still lacks any memory of his pre-war life.

Collins seeks help from fringe elements of English society in figuring out the truth and finding the painting or photograph or whatever it is that has kept him young and alive all these decades, so that he can safeguard it and ensure his immortality.  There's a fraudulent psychic cat lady, a transvestite dominatrix, and a gay collector of old pornography.  Even though he has been straight since the war Collins has gay sex with the transvestite (at eighty pounds a session!) as a means of jogging his memory. After being "buggered," as our cousins across the pond say, Collins faints and has vivid memories of the photo sessions that produced the pictures he purchased at auction, at which Wilde "used him like a girl" and then abandoned him.

Collins' quest is ultimately disastrous; he unwittingly puts the image that renders him immortal at risk and suffers a horrible, and long overdue, death.

This story has a strong central idea and is well plotted and structured.  It is also explicit (in every sense of the word) and easy to understand, unlike some of the oblique and obscure stories I have been reading in these 1990s porno anthologies.  I do think "The Picture of Jonathan Collins" is a little too long.  In an apparent effort to shock or offend "square" readers and amuse or even arouse "hip" and gay readers, the story is full of explicit scenes of homosexual sex and detailed descriptions of S&M clothing. Maybe other people will enjoy these scenes, but I thought they were too long and repetitive and dragged the story down a bit.

I wouldn't say these stories "hurt" or "shocked" me, though the Koja & Malzberg story and the Wagner tale are both outside the norm with their explicit depictions of sex with a monster and exhibitionsitic gay sex.  Both of those stories are worthwhile reads with engaging plots and characters and references to canonical literary works.  The Tem story about broken families and murder feels like an episode of one of those TV shows "ripped from today's headlines" about cops chasing perverts, but without the cops.  Well, two out of three ain't bad.
Posted by MPorcius at 11:32 PM