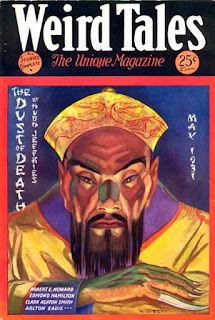 Let's take a gander at the April-May 1931 issue of Weird Tales.  We've already read Robert E. Howard's story from the issue, "The Children of the Night," and today we'll read contributions from Edmond Hamilton and Clark Ashton Smith.

This issue of the unique magazine has a cancel-worthy Fu Manchu-style cover complete with a font that mimics Asian characters.  Do Chinese and Japanese artists and publishers have a Roman way of printing their hanzis and kanjis when they want to emphasize that some book or magazine is about some European or American topic?  Our boys Howard of Texas, Hamilton of Ohio, and Smith of Cali-FOR-NIGH-AY are listed on the cover.

One of H. P. Lovecraft's Fungi from Yuggoth poems is included in this issue, number 10, "Alienation," which is about how a guy can't relate to his fellow humans after spending every night sending his consciousness out into the cosmos to interact with aliens. In the letters column we find Smith praising Frank Belknap Long's "The Horror From the Hills," which you may recall I thought was pretty lame.  Was Smith sincere, or just trying to do a friend a solid by promoting his shoddy piece of work?

Since college, Norton has been fascinated by time.  So he read his Einstein, his Fitzgerald, and his De Sitter, and then spent four years in a Connecticut farmhouse working on his time machine, which he calls a "time doubler," because, as he explains to his college pals Fairley and Olcott, time is like a railroad track and this here machine that can make time double back so you can take a short cut and jump directly from the 1931 section of track to the 1001931 section of track.  Today he proposes to take the time doubler out for a spin, and he has invited his college buddies to come along for the ride.  If I was testing out a time doubler I'd probably travel to next week, a time when I could be confident the Earth would still have oxygen and the commies hadn't taken over yet (though you never know.)  But Norton isn't a small potatoes thinker like me--he sets the time doubler for ten million years into the future! 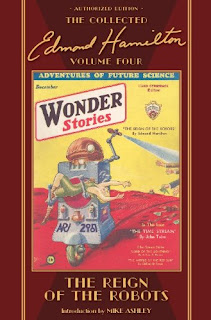 Ten million years in the future, our three heroes find, the Earth is dominated by intelligent plants who ride around in forty-foot-tall walking machines; these walkers have long metal arms, the better to snatch up human beings with so they can be put to work in the metal-walled cities of these diabolical vegetables.  The plant-people quickly capture Norton; Fairley and Olcott escape, but are quickly taken captive by the human beings of ten million years in the future.  Ten million years from now the human race is in sorry shape; having apparently lost the ability to build the flamethrowers,  rocket launchers, armored fighting vehicles and jet fighters that are the glory of our own civilization, the humans of the future have grown short and pale from eons of hiding in underground burrows from the walkers of the plant man slavers.  Their most advanced weapons system is the scimitar, which I doubt even counts as a "system."
Fairley and Olcott quickly make friends with the shorties, and one of them volunteers to guide the time travellers to the nearby plant city where Norton is presumably working as a slave.  The three men assassinate the guards at the gate of the metal-walled city, search for and find Norton.  The alarm is raised, but Norton learned how to operate the plant-people's walkers while riding in the one that captured him, and our heroes commandeer one and fight their way out of the city atop it.  The best scene in the story is one of mecha vs mecha combat as Norton's walker grapples with those trying to keep our heroes from passing outside the city gate.
In these kinds of stories it is normal for the protagonist who has been transported to a new world to fall in love with a princess and to introduce a paradigm shift, either overthrowing an establishment or rescuing an establishment from invaders or revolutionaries, but "Ten Million Years Ahead" is like an episode of Gilligan's Island, with the characters ending up in the same position they were in at the start of the narrative.  Instead of leading the shorties to victory over the green supremacy that has turned our descendants into pale troglodytes, Norton, Fairley, and Olcott just jump in the time-doubler and return to the 20th century, where they destroy the time-doubler, Norton's life work, because travelling through time, they now know, is too dangerous.  (What kind of scientist is this Norton?  Next he'll be telling us gain-of-function research is too dangerous!)

This is a pedestrian story about being captured and escaping; Hamilton doesn't do anything interesting with the idea of plant people--the villains could have been spider people or lizard people or anything else.  I sort of suspect Hamilton was just cobbling together ideas from H. G. Wells (the walking machines from War of the Worlds and the plot of travelling to a future in which humans are oppressed by monsters from The Time Machine) in order to quickly produce something salable.  I'm judging this one barely acceptable.

Haffner Press included "Ten Million Years Ahead" in their 700-page book The Reign of the Robots: The Collected Edmond Hamilton, Volume Four, printed in 2013, and it has never been reprinted elsewhere. 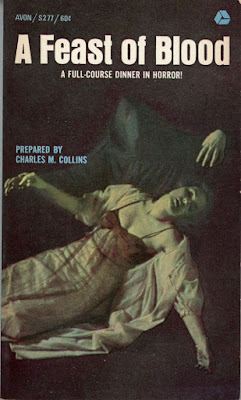 "A Rendezvous in Averoigne" by Clark Ashton Smith

Alright, it's our pal Clark Ashton Smith again, with another tale of that wacky French province, Averoigne.  "A Rendezvous in Averoigne" was voted the best story in the issue by Weird Tales readers and has been reprinted in respectable horror anthologies like the Penguin Book of Vampire Stories and the Oxford Book of Gothic Tales, as well as other maybe less well-credentialed volumes like 1967's A Feast of Blood.  I am reading it in an electronic copy of The Door to Saturn: Volume Two of the Collected Fantasies of Clark Ashton Smith, edited by Scott Connors and Ron Hilger.

A young troubadour has made a date with the pretty daughter of a mercer--they are to meet under a certain tree in the forest in Averoigne!  Just as you and I have, the troubadour and the mercer's daughter have heard that the forest in Averoigne is full of witches and vampires and devils, but they figure those are just peasant superstitions and, anyway, those freaks only come out at night.

The troubadour leaves the path when he hears a cry of terror, and is soon totally lost.  The geography and foliage of the forest seem to change, becoming dark and dense and oppressive.  The troubador comes upon a sinister castle, and is scared to enter it, but every path in the tangled forest he follows eventually leads him back to its gates, leaving him no option but to enter.

Inside he is greeted by a sinister pale aristocrat, whose dinner invitation he is unable to resist.  The mercer's daughter is already at the dinner table with her maid and a man-servant.  The four anxious guests eat dinner while the aristocrat and his equally pale wife sit and watch; the guests then are shown their rooms, one for the men, one for the women.  The prisoners try to stay awake, but fail; when the troubadour wakes up, the man-servant is weak, having been drained of blood by the aristocrat's wife in the night; the maidservant has been similarly victimized by the nobleman.

The troubadour and the man-servant spend the morning searching the castle; in the donjon (the keep) they find a tomb, and inside the tomb they discover their undead hosts, whom they destroy by thrusting a stake through their hearts.  The vampire's bodies turn to dust, the castle disappears, even the forest becomes sunlit and benign, leaving only the now empty tomb and the four relieved guests of the vampires, their ordeal over.

"A Rendezvous in Averoigne" is well-written, but it is a very typical vampire story, with few twists or turns or novelties.  I can only give it a mild recommendation. 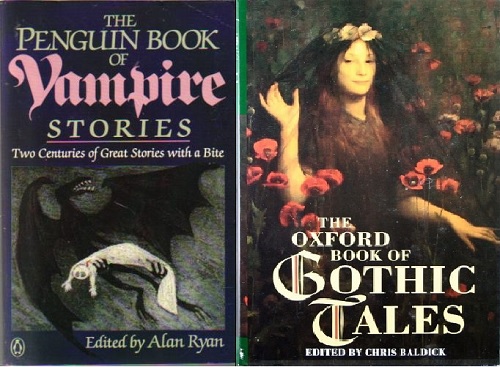 I'd have to say these are sort of run-of-the-mill specimens from these authors and that they represent typical examples of Weird Tales stories; they are not bad, but neither are they surprising or innovative.  A little disappointing, I must admit.