Clark Ashton Smith: "The End of the Story," "The Last Incantation," and "The Uncharted Isle"

Let's check in with the Golden State's gift to the weird, Clark Ashton Smith, and read three stories published by Smith in Weird Tales in the year 1930.  I am reading "The End of the Story," "The Last Incantation," and "The Uncharted Isle" in an electronic copy of the 2007 volume The End of the Story: Volume 1 of the Collected Fantasies of Clark Ashton Smith, edited by Scott Connors and Ron Hilger and published by Nightshade Books.  To the extent possible, Connors and Hilger have put together texts of these stories which reflect Smith's own artistic vision unaffected by the wishes of editors, and The End of the Story also includes lots of interesting notes on each of the 25 stories it presents, drawing on Smith's correspondence with many other important members of the fantastic fiction community like H. P. Lovecraft, Farnsworth Wright, Virgil Finlay, etc.  I strongly recommend all you weirdies out there give Connors and Hilger's Collected Fantasies of Clark Ashton Smith a look. 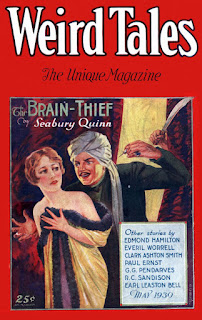 "The End of the Story"

This is one of Smith's Averoigne stories, Averoigne being a fictional province in France.  "The End of the Story" is a first-person narrative, the reproductions of a manuscript left behind by a law student who disappeared in 1789.  The document relates how, on the journey home to his father's estate in Tours, the student got lost in the dark forests of Averoigne and took refuge from a storm in a monastery.  The head monk shared the narrator's love of books, and showed him the rare volumes and scrolls in the monastery library.  One manuscript the monk forbid the law student to read, and of course that is the one he reads the first chance he gets.

The forbidden manuscript relates how some count met a satyr in the forest and the satyr shook his faith in Christ and filled his mind with the idea of "pagan loveliness" and "pagan ecstasies" that continued to endure, despite the prevalence of Christianity, underground.  The count then went to a ruined castle and disappeared down a secret staircase, never to return.  This ruined castle is the very ruin one can see from the windows of the monastery, a ruin rumored to be haunted by demons and witches!  The law student, convinced the manuscript is no fiction but a true account, became obsessed with the idea of finding out what was at the bottom of that hidden stairway, and so went to the ruin.  Underground he found a portal to a magical land where in a beautiful palace a gorgeous woman awaited him, a woman who eagerly offered him her body and her love!

The abbot then burst into the "palace," flinging holy water around.  The woman fled and the magical world and palace were revealed to be an illusion--at the bottom of the hidden stairway is nothing more than an ancient vault full of rubble.

The monk explained that the woman was a lamia, a two-thousand-year-old vampire with a serpent body who has been using her evil powers to attract and devour men for centuries.  The law student returned home to Tours, to write this manuscript, at the end of which he admits he was so happy in the monster's clutches that he is going to return to her.

A decent piece of work; Weird Tales readers thought it the best in the issue.  I suspected that the story was going to assert that Christianity is bunk, that the horror of the story was going to be that we live in a universe in which there are supernatural forces but those forces are devoted to abusing us, not helping us.  The efficacy of the holy water against the lamia, however, vindicated the power of Christ to overcome evil--the horror of the story is that God can only help us if we meet Him halfway and keep on the straight and narrow, and doing so is not always (maybe not ever!) easy!

"The End of the Story" has appeared in many Smith collections, and a few anthologies of vampire stories. 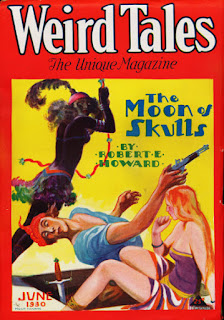 "The Last Incantation"
This brief piece, one of Smith's Poseidonis stories, has been included in 1994's 100 Wild Little Weird Tales and a French anthology of stories about Atlantis as well as many Smith collections.

The elderly wizard Malygris, who lives in the tallest tower in the capital city of Poseidonis and who strikes fear into the hearts of all his countrymen, is depressed.  He thinks back to his youth, to the days before he took up sorcery, to the woman he loved, who died the day before they were to be married.  He uses his magic to summon her shade from the world of the dead, but when she stands before him he is disappointed--something is wrong with her, her beauty does not move him as it did decades ago; has his sorcery failed to accurately recreate her?  Malygris dismisses the phantom.  Then his familiar, a viper who lives in the head of a unicorn mounted on the wall, explains that the girl was the same, but Malygris has changed, is no longer the passionate and innocent youth who could appreciate his fiancé's beauty and whose heart could go out to her.

This story is alright; I suppose its main attractions are its descriptions of the wizard's rooms and of the performance of his spell. 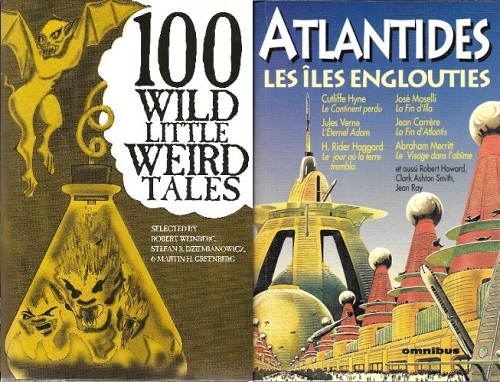 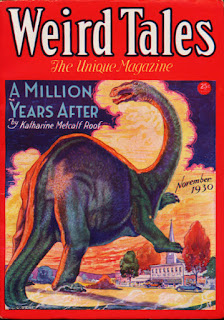 Mark Irwin, our narrator, is the sole survivor of the freighter Auckland, which caught fire in the Pacific and was abandoned.  He is weak from thirst and hunger by the time his little boat drifts into the lagoon of an island with strange flora and fauna.  He explores the island, and finds a settlement of stone buildings in an architectural style he has never seen, inhabited by people who cannot see or hear him.  These people are anxious and seem lost, much like himself.  The night sky is full of stars Irwin cannot recognizable--it appears that he, and the people from the stone houses, have somehow found themselves in a spot outside of their ordinary space and time.  Irwin falls into a sort of lassitude and gives up trying to escape the island, but then one day he witnesses, or has reason to suspect has occurred (his memory on this is vague, as on so many other things) something that spurs him to action: the sacrifice of a child by the strange people to their half-man, half-gorilla god!  Irwin steals some ornate oars, having lost those from the Auckland long ago, and leaves the island on his boat; somehow he makes it back to our universe and is picked up by a ship after, once again, he is reduced to delirium by lack of water and food.

"The Uncharted Isle" is well-written if you consider each sentence on its own, but there is no interaction between people and no real danger and no actual problem-solving, so there is very little plot and very little tension.  This is a mood piece in which the theme is the fact that the universe and our very lives are essentially mysterious to us, which is something I can endorse and certainly is a foundational theme of weird fiction, but since there is no action and little human feeling, "The Uncharted Isle" is kind of boring.  I think we have to say this one is just OK; an unusual and well-wrought piece that achieves its creator's goals, but which is not very entertaining.

"The Uncharted Isle" has been reprinted in a few anthologies and many Smith collections, including a French one for which it is the title story, the cover of which depicts Irwin with his stolen oars, proof that his adventure was not just a dream. 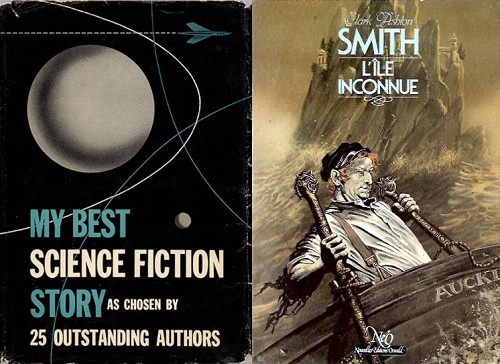 **********
"The End of the Story" is a well-constructed traditional horror story with broad appeal--everybody who reads books can understand the allure of mysterious books, and everybody who is past puberty can understand the allure of a mysterious beauty.  "The Last Incantation" and "The Uncharted Isle" are less conventional and less compelling, their appeal based less on plot and more on abstract themes and mood, though "The Last Incantation" does have strong images.
Expect to see more Clark Ashton Smith soon as we continue to explore Weird Tales here at MPorcius Fiction Log.
Posted by MPorcius at 10:45 AM