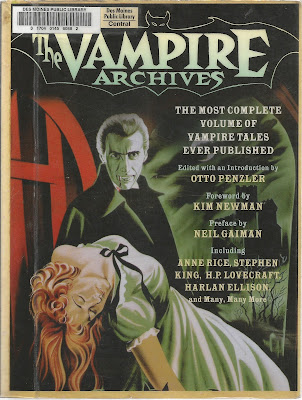 Some readers may recall that back in March I read the short story "A Serious Call" by George Hay, a story which referred to and was some sort of homage to M. R. James, the British intellectual and writer of ghost stories.  As I have so many times, at that time I resolved to read some work by a writer--this time James, whom wikipedia is telling me was admired by many writers I am familiar with, like H. P. Lovecraft, Clark Ashton Smith and Ramsey Campbell, and was a "reactionary" who opposed "modernity and progress" and hated the literature of his time--but I did not follow through on this resolution.

Until this week!  Last week I was flipping through Otto Penzler's huge 2009 anthology The Vampire Archives and saw James's name in the Table of Contents, and was reminded of my resolution.  So this week, I read the three James stories included in Penzler's book.

Through multiple layers of framing devices concerning scholars investigating the history of an English cathedral, we learn a story which took place in the early 1840s. The cathedral in question (in 1840) is being renovated to align it with the currently popular Gothic Revival style, thanks to a new young Dean who is swept up in the fad. It is perhaps evidence of James's purported conservatism that all the sympathetic characters oppose this radical alteration of the church's architecture, that much beautiful woodwork is destroyed in the process, and that the renovation unleashes a menace to society.

The removal of a pulpit reveals an unmarked tomb.  There is no evidence of who is interred there, but various episodes indicate to the reader that a monster of some type was imprisoned in the tomb, and is now preying upon the populace.  People have horrible dreams, at night dreadful cries are heard, a child looks out a window and sees two dim red eyes in the shadows, and numerous people fall mysteriously ill and some even die.  In the end the wiser elements of the community drive off the dimly perceived monster despite the objections of the reforming Dean.

The noble who built the manor house and is infamous for mercilessly crushing a peasant uprising, a Count Magnus, is buried in an elaborate mausoleum nearby. Wraxall visits the mausoleum, where he finds the tomb has three padlocks on it!  He feels drawn to visit the Count's tomb again and again, and with each visit one fewer padlock is secure!  When he realizes some supernatural agency must be hypnotizing him into freeing the undead Count, it is too late!  Wraxall flees to England, but the Count is on his tail, and Wraxall dies in a remote village of unknown causes; unknown, that is, until our narrator finds his hidden papers, years later.

To my surprise, this is a humor piece, full of deadpan jokes about life at an English boarding school.  Did I borrow a book of vampire stories from the library in hopes of reading a bunch of jokes?  No, I did not.

Arthur Wilcox is a student admired and beloved by all.  One of the story's many gags is the list of wacky good conduct medals and merit badges he receives. Stanley Judkins, in contrast, is a troublemaker whom the school authorities have no use for. The story's most extravagant joke is the revelation that, to provide opportunities to earn a "Life-saving Badge," younger boys are tied up and thrown in a body of water. When it is his turn to earn the badge Judkins simply lets the young boy drown, creating a hassle for the school administration.

Near the school is a field avoided by all the locals.  In the center of the field is a clump of trees and a well; Judkins is told to avoid the well, as it is home to sinister monsters. He goes to investigate it anyway, and students and faculty watch from a hilltop as he fights, unsuccessfully, for his life against a crew of weird skeletal beings.  Judkins' body, drained of blood, is retrieved, but his spectre joins that of his murderers in haunting the evil clump of trees.  There is a strange discontinuity of tone between this gruesome material and the broad jokes of the first part of the story.

These stories are all entertaining, if not spectacular.  The monsters (James never uses the word "vampire") all have an interesting look to them, and interesting abilities, and each story has scenes designed to "chill" or "creep out" the reader, which are effective. 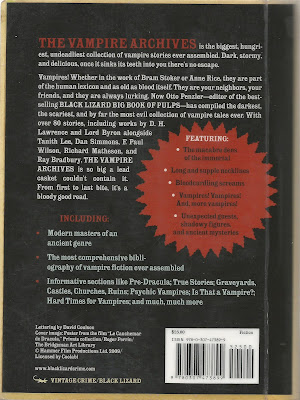 It is perhaps remarkable how many layers James puts between the reader and the characters who actually suffer fear and death at the hands of the monsters in the stories.  In "An Episode of Cathedral History" we learn about the monster from the narrator, who has the papers of another guy, which describe the conversations he had with a third guy.  This third guy was present during the monster's campaign of terror, but never saw the monster; his descriptions of it come from others.  The narrator of "Count Magnus" is describing to us documents he found in an old house, and in "Wailing Well" we never see the well or its evil inhabitants at close quarters, only from a distance.  I'm not sure how I feel about this storytelling strategy; is the fact that we witness the humans' interactions with the monsters from a distance make them more or less believable, or more or less horrifying?  Or is the distance significant because it instills in the reader a different type of horror; instead of the horror of pain and imminent death, the reader experiences the horror of uncovering new knowledge, knowledge that the universe is more complicated and irrational than previously thought, as well as more dangerous.

In our next episode we'll check out stories included in Otto Penzeler's The Vampire Archives from celebrated post-World War II writers of short stories whose work I already have some degree of familiarity with.
Posted by MPorcius at 6:13 PM