"Secrecy has always been a big thing with you people," Jerome said, voicing a minor criticism as a camouflage for the deep revulsion the Dorrinian's words had inspired in him. 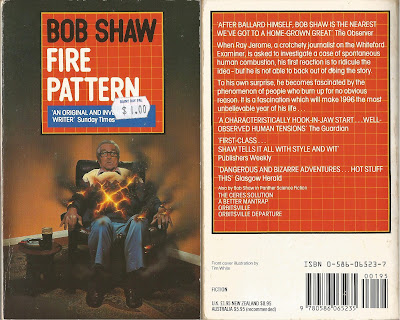 I guess like a lot of people my age, when I was in my teens in the 1980s my family had a copy of Reader's Digest's Mysteries of the Unexplained, a book about paranormal phenomenon.  One of the things which really got to me in the book was the section on spontaneous human combustion.  I wasn't a sailor, I didn't believe in God, and I lived in the suburbs, so sea serpents, demonic possession, and sasquatch didn't scare me, but spontaneous human combustion seemed like something that might be real and could happen to anybody, anywhere.  Around the same time this phenomenon was scaring a young MPorcius, Bob Shaw wrote and published a science fiction novel based on spontaneous human combustion, Fire Pattern. 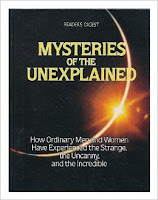 Published in 1984 and set in 1996, Fire Pattern has the words "science fiction" on the back cover but starts out much like a conventional thriller, one of those books about an ordinary middle-class person facing quotidian life challenges who starts a new love relationship while doing detective stuff and uncovering a conspiracy. Fifty-year-old Ray Jerome is still recovering from the death of his wife and the loss of his job as an engineer.  His current job is as a reporter at a small New England newspaper (British subject Shaw set this novel in the United States, apparently an alternate universe USA in which Americans measure distances in "kilometres" instead of "miles" and call their summer homes "chalets.")  Jerome, who is older than everybody in the office and worked at a trade journal, is always correcting everybody's grammar and writing style and ridiculing people's beliefs in goofy nonsense like spontaneous human combustion.  Circumstances force him to change his tune about fortean phenomena when a case of "SHC" occurs in his little New England town, and the editor of the paper (a forty-year-old woman our hero has a crush on) assigns Jerome to investigate.

Like in any detective story, Jerome talks to the witness, reads background material, visits the morgue, looks for clues in photos, blah blah blah.  You can bet I was relieved when, 75 or 80 pages into the 208-page paperback, we plunge into Van Vogt territory!  Cases of SHC are revealed to Jerome to be botched mind transfer operations originating from Mercury!  For centuries the telepathic Mercurians (who call themselves "Dorrinians"), by the hundreds, have been colonizing Earth by switching bodies with Earth people (and in the process building up a colony on Mercury of Earthlings in Mercurian bodies!)  Jerome finds himself in the middle of a secret war between factions of telepathic Mercurians on Earth, and then, in classic wish-fulfillment fiction style, is transferred to a young healthy body on Mercury!  In the first part of the book Shaw kept reminding us of Jerome's arthritis and poor eyesight, making the move to the Mercury body cathartic.  Even better, the Terran colony on Mercury has a culture of sexual promiscuity--I mean free love! 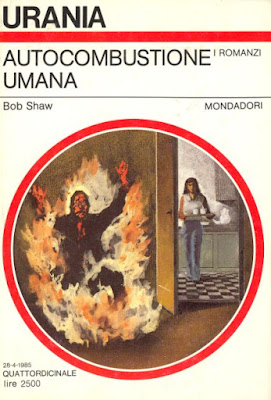 Despite his improved physical health and active sex life, life on Mercury is no picnic for our hero!  He misses Earth and finds that he doesn't really get along with the natives, who can be arrogant, dismissive, and selfish.  But the wish-fulfillment fantasy continues when it is Jerome (earning the title "Dances with Dorrinians") who saves the Mercurian civilization and then helps the Mercurians secretly conquer the Earth with their telepathic powers! Like in so many anti-human/anti-Western science fiction stories (The Day the Earth Stood Still, The Killer Thing, Hero's Walk, Childhood's End, The Forever War, The Cosmic Rape, etc) we are expected to cheer on the aliens as human free will is extinguished and the Earth becomes some kind of utopia under the imperialism of the extraterrestrials.  If these Mercurian psykers hadn't hypnotized all of us, we'd all have died in a nuclear war caused by humanity's failings!  (Like my college professors, these SF stories never want to blame the Soviet Union for the Cold War, but instead blame the West or some abstraction like "tribalism" that places equal blame on the corrupt and racist bourgeois democracies and poor Uncle Joe's misunderstood, well-intentioned and hard-pressed worker's paradise.)  Jerome's reward for putting the Mercurians in charge of his fellow Earthlings is getting his memory of all he has learned about SHC and Mercury erased, getting his mind put back in (a healthier version of) his old body, and getting married to that sexy newspaper editor.

Even if the ending disappointed me, there is a lot to like about Fire Pattern; it is a very entertaining read.  Shaw is a skilled writer, and the plot is good.  Because the cover illo and blurbs make no reference to outer space, I was truly surprised when the whole Mercurian telepath angle was sprung on me, and surprised again when Jerome ended up on Mercury in an alien body.  I had expected Shaw to explain spontaneous human combustion to be the work of callous big business or wealthy predatory physicians or something like that (sort of like what Pohl did in Drunkard's Walk.)  And because Shaw shows how self-important the Mercurians are, and has them keep bragging about how ethical they are (the Mercurian doth protest too much, I thunk), in the last few pages, when Jerome has to make his big decision, I thought there was a real chance he would side with the people of Earth over the invaders. 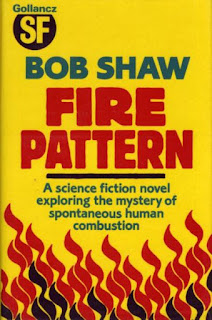 A curious element of the novel was its anti-computer, anti-technology attitude.  Computers put Jerome out of work, a computer that checks grammar is to blame for Jerome's fellow journalists' poor grasp of the English language, and Jerome thinks recording interviews via shorthand is more effective than using a tape recorder.  Mercurian engineering is inferior to that of the Earth, but the Dorrinians' superior mental abilities mean it is they who conquer us, without us even knowing what is happening!

Maybe I've got Van Vogt on the brain, but another thing about Fire Pattern I found interesting was possible links or similarities to that wild Canadian's work.  Besides all the telepathy stuff, the hidden secret aliens, and the secret conspiracies, I found Fire Pattern's explanation for spontaneous human combustion to be very similar to a striking scene in one of Van Vogt's better stories, "Secret Unattainable."  I also wondered if the ways Jerome was always criticizing other journalists' grammar and word usage was some kind of oblique reference to how Van Vogt's writing is famously confusing and clumsy.

Do I wish Fire Pattern was a ringing endorsement of human independence and loyalty to the Earth? Of course I do.  But since it is a well-written, well-constructed, and surprising novel, I still enjoyed it and am looking forward to reading the other Shaw books I own.
Posted by MPorcius at 7:14 PM