"I could want for more, and do.  I have need of a place to be and to belong!  I who have been called Orrikson and Strodeson and yet am son of neither.  I need more, Lords of Iron!  It's people, people I can be calling my own I have need of...and vengeance, the vengeance I've dreamed of." 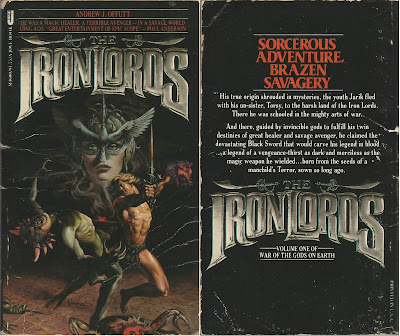 I purchased Andrew J. Offutt's The Iron Lords on the same trip to the Des Moines Salvation Army that yielded Alistair MacLean's H.M.S. Ulysses.  How could I resist Rowena Morrill's cover painting, which shows a coldly beautiful woman's helmeted face and a big slab of beefcake fighting improbably silly monsters (is that a crab with a human face?), as well as Poul Anderson's enthusiastic blurb ("Great entertainment of epic scope!")?  The Iron Lords is the first volume of a trilogy, and was first published by Jove in 1979.  My edition includes interior illustrations signed "rw."

Seven-year-old Jarik and his eight-year-old sister Torsy witness, from the safety of the woods, their seaside village raided Viking-style, all their friends and family raped and murdered.  Jarik vows revenge on these "Hawkers," and has a vision of himself wielding a black sword, and of a cruel, taunting, silver goddess.  After a sea voyage in a little boat the kids are taken in by people from another village, one inland.  Jarik grows up to be a skilled warrior with a hugely muscled body who performs prodigious feats, but most of the villagers never really accept the two foundlings.  Jarik has rivalries and feuds, and after killing one of his tormentors, Jarik, accompanied by Torsy, now around 18 years old, is exiled from this second village. 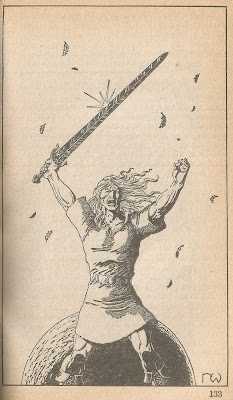 After some violent and rapey adventures Jarik and Torsy are taken in at a third village.  In the center of this village is an iron meteorite with a black sword embedded in it.  When Torsy is murdered by yet another bunch of raiders (the villages in this world are constantly raiding each other), Jarik draws the sword from the stone Arthur-style and becomes a virtually invincible fighting machine.  The three black armored gods who put the sword in the meteorite appear, and spirit Jarik away to their mountaintop fortress where they are tended to by beautiful maidens.

The three black clad gods are the Iron Lords.  These powerful beings turn out to be refugees from another planet, among the last survivors of a high-tech society that was destroyed in a cataclysmic collision between planets.  The three Iron Lords are at war with one of their fellow refugees, the silver goddess Jarik saw in a vision a decade ago, who is known as the Lady of the Snowmist.  The Hawkers who massacred Jarik's community back in that first village worship the Lady, so when the Iron Lords ask Jarik to pursue the quest of killing the Lady of the Snowmist, he is eager to do so.  The Iron Lords transport him to the Hawker village, where he confronts both the Hawkers and the Lady!

This confrontation does not go as planned, and at the end of this first volume of Jarik's saga he has been enslaved by the Lady of the Snowmist and sent on a mission by her, a voyage to the other side of the world in the company of the Hawkers' leader!

While much of the plot and its components feel derivative, Offutt includes some interesting and unusual elements in The Iron Lords.  One of the novel's main themes is that of the outsider who does not belong, wherever he may go.  The alien gods are outsiders, as is Jarik himself.  It turns out that Torsy is not really his sister, that Jarik was adopted by the people of that first seaside village.  (When Torsy realizes this she falls in love with him and contrives to have sex with Jarik--Jarik resists because of the incest taboo and because Torsy is too skinny for his taste.)  When Jarik is made an ally of the Iron Lords he finally feels like he has found a group to which he belongs; the Lady tells him they were just using him, as she will now use him.

The origin of the "gods" and their relationship with the common people is also interesting; to renew their physical bodies, the gods occasionally appear to their worshippers and take away with them the community's healthiest young men.  Another unusual element is how Jarik is two people--usually he is the angry and violent Jarik who feels estranged and seeks revenge, but when he comes upon a wounded loved one (like Torsy after she has been gang raped) his mind leaves his body and another consciousness, perhaps his unborn adoptive brother Oak (killed in the womb during the attack of the Hawkers), takes over his body and expertly administers first aid.  While Oak has possession of Jarik's body Jarik has visions that foreshadow his fate and hint at the realities of his world.

I'm OK with The Iron Lord's plot, but the style and execution have some problems--Offutt is trying to accomplish something "mythic" and "epic," and does not quite get there.  He employs poetic devices like repetition and lots of metaphors; page 23 contains a good example, a paragraph in which variations of the couplet "he was strong, he could row" appears three times, and bloody wounds are described as mouths crying out for vengeance (compare the Old Testament's "What hast thou done? the voice of thy brother's blood crieth unto me from the ground.") 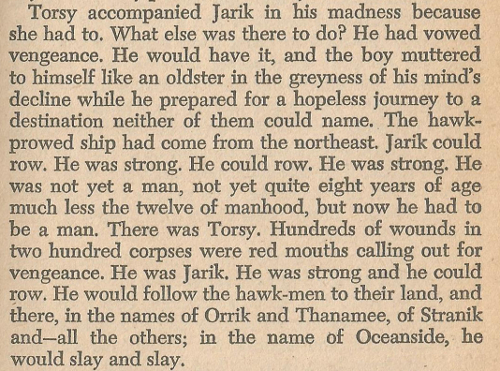 Most of the time Offutt writes in the voice of an omniscient narrator who knows Jarik's every feeling and thought, but sometimes he acts like a chronicler working from contradictory oral and written sources.  This sloppy lack of consistency was kind of disconcerting.

A bigger problem is that Offutt can be long-winded.  There are long dream sequences, long descriptions of people's houses and clothes, a long blow by blow fight scene that gets a little tedious, and a long scene that details a religious ritual that doesn't add anything to the story.  There are also many characters, and while Jarik, Torsy, the gods and the leader of the Hawkers are interesting enough, each village is populated by a multitude of vaguely drawn and essentially interchangeable people.

The Iron Lords is no masterpiece, but the odd elements kept my interest and I was genuinely curious about what would happen next,  If I see the rest of the trilogy on the shelves of a used bookstore I will probably pick them up to find out what happens to Jarik and the alien gods who are manipulating him.
Posted by MPorcius at 4:56 PM